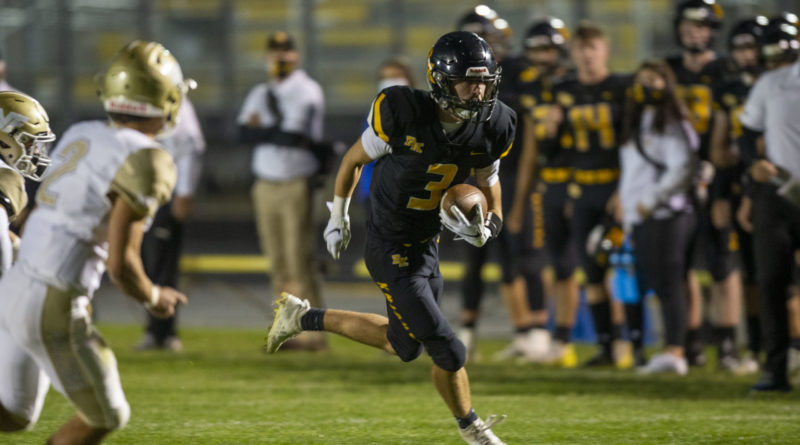 The six-time state champions — tied for the most titles in Idaho 4A classification history — were stunned on Sept. 11 in a 40-34 loss to Emmett, which hadn’t beaten them in nearly a decade.

The victory was their 11th straight over the Falcons, who haven’t defeated them since 2000, and keeps them in the hunt for yet another 4A SIC crown.

“The loss really brought us together,” junior halfback Seth Knothe said. “Everyone bonded. Everyone just decided to put in the work even more. We really came together as a team and have bigger plans now.”

The two of them set the tone early for the third-ranked Knights. One or the other had the ball in their hands seven times during the 9-play, 62-yard scoring drive to open the game. Croteau finished it off with a 6-yard pass to Jason Buss, which gave Bishop Kelly a 7-0 lead five minutes into the game.

The defense took over from there. It forced No. 4 Vallivue to turn the ball over on downs during its first two possessions of the game. The last of which handed the Knights offense a 1st-and-10 at the Falcons 29-yard line. Bishop Kelly turned both of those opportunities into points on a 1-yard QB sneak by Croteau and a 2-yard run by Knothe for a commanding 21-0 lead at the break.

“They only had I think two, maybe three offensive possessions in the first half,” Croteau said. “Our defense played great. … It’s a huge confidence booster.”

(All photos by Brian Losness)

But the Falcons showed some life in the second half. They marched right down the field and scored on their opening drive via a 22-yard pass from junior quarterback Casey Cope to senior wideout Lincoln Marler, who somehow managed to get both of his feet down in the corner of the end zone. The play cut the deficit down to 21-6 with 7:59 remaining in the third quarter.

However, Bishop Kelly answered just moments later and did so in pretty spectacular fashion. Knothe took a screen pass from Croteau and sprinted down the near sideline. The only person standing in his way was Cope, who he shucked out of his way Derek Henry style, for a 70-yard touchdown catch to put the Knights back up three scores at 28-6 with 4:42 left in the third.

“That was a great play,” Bishop Kelly coach Tim Brennan said. “He’s a very good player. He’s a team guy. He works his butt off. It’s all about the team and he just does whatever we ask him to do.”

Vallivue trimmed the lead to 28-12 on a 5-yard run by Cope with 1:09 to go in the third and had a chance midway through the fourth quarter to make it a one possession game. But Cope overshot Marler in the left corner of the end zone on 4th down at the Bishop Kelly 29, which effectively ended the game.

Knothe put it away for good with a 3-yard run with 28 seconds remaining in regulation.

The Knights close the regular season back at home against Ridgevue on Oct. 23. Bishop Kelly will win the league title with a win over the Warhawks and an Emmett loss to Vallivue next week.

“We need to take care of business next week and see what happens,” Brennan said. “We can’t worry about anybody but ourselves. We just got to get better this week and get better next week, so we can continue on in the playoffs.”

Cope combined for 193 yards in the loss for the Falcons.