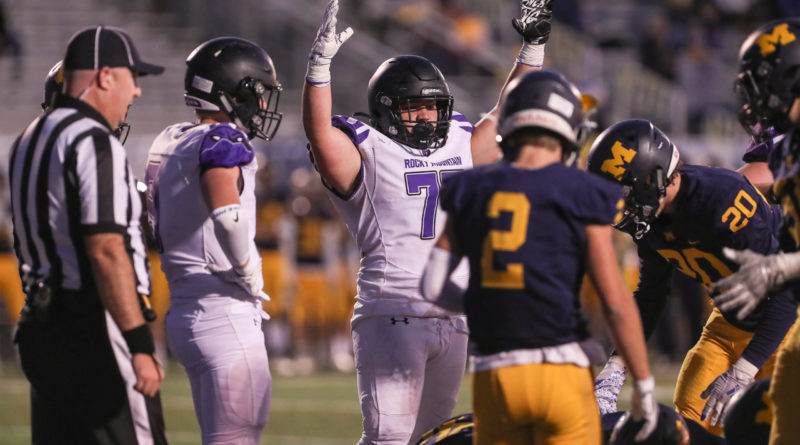 When Rigby High School football coach Armando Gonzalez tries explaining the impact wide receiver Taylor Freeman has had on the defending Class 5A champions’ season – he knows Friday night was just icing on the cake.

Freeman’s biggest offering was something he did in the summer – sacrificing his ego.

Rigby is something special, and the fourth-ranked Trojans rallied big in the second half to topple No. 3 Highland, 28-20, at Iron Horse Stadium on Friday night in Pocatello.

Freeman hauled in two touchdown catches from newcomer Tiger Adolpho, added a two-point conversion reception – and recovered the game-clinching onside kick with more than a minute to go.

The Trojans not only clinched 5A High Country Conference titles in back-to-back seasons for the first time ever, they earned a first-round bye into the state playoffs.

“I could not be more proud of a group of kids,” Gonzalez said. “What we did taking over this program … they were ninth graders. And what I put them through prepared them for this situation. The average teenager would not go through that … but they did. And in these types of games that matter, you are mentally tougher to withstand a challenge from a team like that.”

With the Rigby offense sputtering (40 total yards in the first half), and seemingly nothing to spark it, all it took was a short pass to Freeman to get the ball rolling.

Freeman sidestepped a defender and took Adolpho’s pass 70 yards down the right sideline for a touchdown to tie the game at 14-14 with 6:35 remaining in the third quarter.

Gonzalez goes back to the summer when Adolpho arrived for tryouts – and Freeman was thought to be the favorite to land the quarterback job. The two teenagers battled it out in camp – and Adolpho, a transfer from Hawaii, eventually got the nod.

“Coming from California where you have quarterback controversies that do not go so well – I’ve seen it all go south fast,” Gonzalez said. “But I sensed early in practices that I had two really unselfish kids who were going to do whatever was best for our football team.”

And when Gonzalez broke the bad news to Freeman?

“He said, ‘I am going to be the best wide receiver I can be,'” Gonzalez said.

What was ultimately Highland’s undoing was three turnovers, including a crucial one on a muff catching a punt that set the Trojans up first-and-goal at the Rams’ 7 late in the third quarter.

Zheik Falevai broke the tie with his second touchdown of the night on a 7-yard scamper with 2:43 to go in the quarter.

And after Rigby stopped the Rams near midfield on fourth down midway through the fourth quarter, Adolpho and the offense converted three third downs – the last on his 26-yard touchdown to Freeman to put the visitors up, 28-14 with 5:43 to go.

“We had not played a game in two weeks,” Gonzalez said. “And we had not had the challenge up front needed to prepare us for these types of games.

“It just took us a little time to get going.”

As Rocky Mountain’s offense flickered on and off, its defense came through in a 5A SIC Foothills-clinching win Friday night, setting the table for a shot a fourth consecutive league title.

In the process, the Grizzlies pushed their league winning streak to 14 games.

Max Lehman (157 yards), Jordan Erickson (115) and Arthur Williams (87) helped the Grizzlies post a season-high 371 rushing yards and their defense had four interceptions as No. 2 Rocky Mountain pulled away late.

Xander Nawahine had two of those interceptions.

“(The secondary) is fairly seasoned, lots of seniors, but hadn’t had a lot of interceptions, so we were excited to get a lot of turnovers — get that turnover train going,” Rocky Mountain coach Chris Culig said.

Seventh-ranked Meridian rode a route that Culig admits gave the Grizzlies fits in the first half.

Rocky Mountain leapt up to a 17-0 lead, but Meridian charged back and scored twice — a 46-yard touchdown pass from Malakai Martinez to Davis Thacker and a 12-yard pass from Martinez to Blaze Toikioka — to pull within three (17-14) at halftime.

Martinez finished with 215 yards passing and two touchdowns for Meridian.

Erickson broke loose on a 22-yard touchdown run up the middle, where he broke some five tackles before crossing the plane to end the scoring drought and go up two possessions at 24-14.

“That was big,” Culig said.

Those were the stakes Friday night, and eighth-ranked Post Falls drove home victors and owners of a playoff berth. Getting there took a little trickery.

The Trojans rode a a fake punt-turned reverse in the first quarter, then a kick return for touchdown by Tanner Sessions to beat ailing Lewiston and nab the No. 2 seed out of the 5A Inland Empire League.

“In all phases of our special teams, we really executed at a high level,” Post Falls coach Blaine Bennett said.

Lewiston’s James White scored on a 2-yard run to put the Bengals on the scoreboard first. Post Falls responded early in the second quarter when Josiah Shields broke loose on a fake punt to cut it to 8-7. It triggered a run of 23 unanswered points.

Post Falls (4-2) pulled away late, avoiding the down-to-the-wire theatrics from the teams’ first matchup on Sept. 11, which PF won 27-26. Lewiston has since lost standout running back Cruz Hepburn to a season-ending meniscus injury.

“When you get back into league, everything starts over,” Bennett said of the 5A IEL’s three-game leaugue gauntlet, “so it really doesn’t matter what you do those first four or five games. To come down here on the road to play a very good Lewiston team, that was a big win for our program.”

You can’t fake thinking you can beat a perennial powerhouse program.

Chad Hill has gone through a few seasons when his Cougars hoped they could defeat Sugar-Salem, the two-time defending 3A champions – and instead got soundly beaten.

But these past two weeks, Hill could tell his players believed it. And they proved it Friday night, becoming the first 3A team to upend the Diggers since Fruitland did in 2017 in the state quarterfinals.

“Just from our team mindset and confidence, we thought we could give them a run tonight – and win this game,” Hill said.

And they did it facing a little adversity, too.

Sixth-ranked South Fremont jumped out to a 14-0 lead, watched the Diggers rally – and gave up a last-second touchdown to close the first half on linebacker Ryan Harris’ interception return to tie the game at 21-21.

“They had all the momentum” Hill said. “And they got the ball to start the second half.”

Sugar-Salem threatened to take the lead on its opening drive, but was stuffed on fourth down at the Cougars’ 14.

Four minutes later, Kaimen Peebles (299 passing yards, 47 rushing yards) led the offense to what proved to be the game-winning score – a 15-yard touchdown pass to Dallin Orme, his fourth one of the game, with 3 1/2 minutes remaining in the third quarter.

“Kaimen has a lot of moxie,” Hill said. “After that (interception) at halftime, he was still confident – and talking in our huddle.

“He has the leadership ability to go with the athletic ability.”

Sugar-Salem could never get in position to take the lead in the fourth quarter. Hill credited his defensive line (Tag Bair, Kash Purser, Cooper Hurt) for being in Diggers’ quarterback Kyzon Garner’s face all night, batting down five of his passes.

If South Fremont beats Teton next week, it will win the 3A Mountain Rivers title.

“We definitely want to be out there as one of the top teams in the state – and have teams put a target on us,” Hill said. “Hopefully we will be prepared for it.”

Matt Holtry has been in the coaching business long enough to handle an increased heartbeat, elevated blood pressure – and the perils of fourth-down trickery.

And in the end, the reigning two-time 3A runners-up handled the final seconds like a grizzled group.

On fourth and goal, the fifth-ranked Trojans completed a reverse pass for a touchdown to complete the stunning comeback at seventh-ranked Weiser.

On the game-winning play, quarterback Jaxon Dines handed it off to streaking wide receiver Eli Heck. Once Heck turned the corner, he saw Keagen Christensen in the end zone.

And Heck’s 8-yard scoring pass was right on the money with 18 seconds remaining.

“We complete it in practice, too,” Holtry said. “But I am sure (Heck) makes it with fewer butterflies in his stomach than he had tonight.”

Holtry noticed how the Weiser defense had “floated heavy” in the direction of a few toss sweep runs earlier in the night. So he thought the gadget play would work with the game on the line.

“Once we got it around the corner, there was nobody in his face to throw it,” Holtry said.

The Wolverines grabbed a 28-19 lead with eight minutes to go on Brett Spencer’s 10-yard touchdown strike to Kooper von Brethorst.

But Homedale answered on Hayden Kincheloe’s short score 2 1/2 minutes later to cut it to 28-25.

On their next series, the Wolverines faced a third-and-2. Spencer tried running for it on a quarterback keeper, but linebacker Willie White stuffed him for no gain, and that forced a Weiser punt.

The Trojans went 46 yards in the final three minutes to score the game-winner – and set up a winner-takes-all showdown with Fruitland for the Snake River Valley Conference crown.

“The more you coach – the longer you coach – the less the nerves are there,” Holtry said. “But I would be lying to say the intensity does not rise. It is about keeping calm and composure … and keeping a clear mind, especially when you go deep into the playbook.”