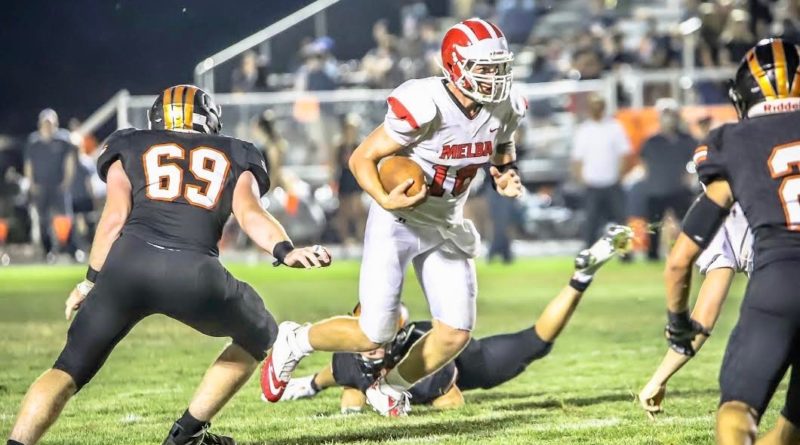 Juan Colunga was a pint-sized quarterback directing the Wing-T offense when he led the Melba High School Mustangs to the Class 2A state championship in 2002.

Now as the coach at his alma mater, what does he see now behind center?

The polar opposite of him – sky-scraping senior Henry Clark. (Feature photo by Tara Rose/TRaditions Photography)

And yet, Clark has the Mustangs on a similar arc: They play Nampa Christian on Friday night with a chance to win their first 2A Western Idaho League title since 2004.

But if you ask anyone around Melba, a town 40 miles southwest of Boise in Canyon County, about what the end-result hope is in 2020 — many think the Mustangs are the best threat to end West Side’s state championship reign (they are ranked directly behind No. 1 West Side).

But first, the Mustangs needed Clark to develop into the same type of leader — and producer — that he is today.

Also a standout baseball player, Clark played quarterback all through youth leagues – and into junior high.

But when he came to high school in 2017, KC Haney was already entrenched as Melba’s starting signal caller. So, Clark tried out for a new position – tight end.

“He was so big, and we were low on numbers and athletes,” Colunga said. “So we put him there.”

Midway through the season, Clark suffered a concussion and missed much of the second half of the year, including a play-in playoff game against Grangeville.

Clark, in fact, did not come out for football as a sophomore, instead focusing on baseball and basketball. At the same time in 2018, Colunga began transitioning the program’s offense from a spread attack back to its roots – the Wing-T.

It was the offense Colunga knew best – and thought was the best fit for his personnel. So when Clark returned after a one-year hiatus and won the quarterback job in 2019, it began a new chapter.

It also began a series of tough-love conversations as he learned the new offense.

“I am not an easy coach to play for – I demand a lot,” Colunga said. “I know what championship football is, so I am not patient at times. And when he struggled … we had some harsh film-review sessions.”

“Sure, he was hard on us … but it helped with the work ethic,” Clark said. “I mean, there was no other option. We had a lot to do. I had to pick (the offense) up quickly.”

Lining up 90 percent under center, Clark was still featured as a passer. In fact, he recorded a 1,000-yard season for the Mustangs, who reached the 2A semifinals last season, losing to West Side.

Last offseason, Colunga consulted with his former coach at Melba – Brandon Harris – about implementing a big-play element into his Wing-T attack.

Harris has had plenty of experience highlighting a taller, more mobile quarterback in the Wing-T. After he left Idaho in 2003 to become the offensive coordinator, then the coach at John Pitman High School in California, he had former San Francisco 49ers quarterback Colin Kaepernick at the helm of his offense.

One of the things that worked for Kaepernick was something Harris suggested to Colunga: line Clark up more in shotgun so he can survey the field and better pick his spots to attack, run or pass.

Melba’s passing game in the Wing-T has been more dynamic this season: Last week against New Plymouth, Clark eclipsed the 1,000-yard mark again in just his fifth game.

“We’ve added a lot of (Harris’) concepts into the offense,” Colunga said. “Now Henry is on pace to break his own record, and add a lot more (yards) to it.”

Clark also gives the Mustangs another added element – a pass rusher. He is also their best defensive lineman.

“At defensive end, I feel like I can get my anger out,” Clark said.

He also gets a lot of questions during games from opposing linemen.

“It is, ‘What the heck are you doing, and why are you on the line?'” Clark said. “I don’t know what to tell them. I grew up playing defensive end, and I like it.”

What Clark likes equally well is winning state titles. He was the pitcher on the mound that closed out Melba’s 2A title run in 2018 – and would like another one in football.

“Coach (Colunga) has that championship ring in his office, and we always look at it,” Clark said. “He says there is nothing like it.”