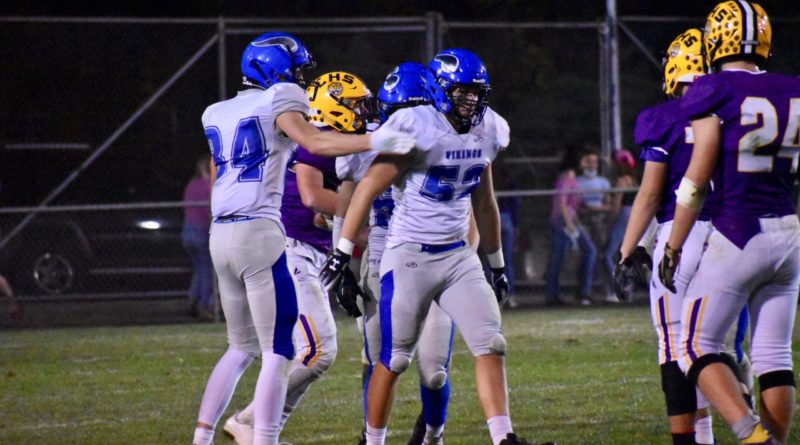 LEWISTON — Jack Prka accounted for five of his six touchdowns in the first half to help top-ranked Coeur d’Alene thrash Lewiston 56-14 on Friday night at Lewiston High School.

The win marked a 5-0 start for the Vikings and the first official 5A Inland Empire League win in the COVID-adjusted schedule.

Prka’s 405 passing yards came on 23 of his 29 passes completed for the Vikings. Lewiston (3-4, 0-1) quarterback Kash Lang threw two touchdown passes to Jared Grainger and accounted for 248 total yards of offense — 217 through the air, 43 on the ground.

Ancillary receivers stepping up for the Vikings

Coeur d’Alene has depth. At seemingly every position.

Perhaps the most glaringly deep group Friday night was the Vikings’ wide receiver corps, who played as much of a role in quarterback Jack Prka completing 23 of his 29 pass attempts then Prka himself.

“They’re super reliable, too,” Prka said. “I’m thankful for that. We have a lot of good receivers, good talent.”

Isaiah Griffin’s eligibility was approved the week of the first game of the season. The Gonzaga Prep (Wash.) transfer stepped into a role as slot receiver, and became even more relied upon when junior slot Alex Walker went down with an injury.

On Friday, 10 different receivers caught passes and Griffin’s 84-yard haul was the single longest gain of the evening.

More on that in a moment.

If luck plays any factor in a team’s success, which many coaches will tell you it is, the Bengals (3-4) sure haven’t had it on their side.

After a 2-0 start to the season with theatrical wins over Kuna and Lake City, Lewiston faced two day-of location changes due to air quality, which meant, one week, hours spent on a bus on whim.

This week, the school faces a handful of COVID-19 flare-ups among students, mostly avoiding football players. Then came the injuries. Most notably, running back and University of Washington baseball commit Cruz Hepburn suffered a partially torn meniscus, Bengals coach Matt Pancheri said Friday night, and may miss the rest of the season.

“It’s something he’s going to have to take care of,” Pancheri said of his star running back, who watched the game in sweats Friday. “We don’t expect him back.”

Hepburn’s absence removes half of the two-headed rushing attack he and Kash Lang presented in the season’s infancy, breaking off long touchdown runs on a moment’s notice. Sophomore running back Elliot Taylor missed Friday’s game with an undisclosed injury, though the team expects him to return.

With Hepburn down Lang shouldered a bigger load — and held his own. The hard-nosed runner couldn’t get much going on the ground (12 carries, 43 yards), so he took to the air. It figures Grainger was his favorite target. The two have played together since youth.

“It sucked losing Cruz, because he was a really big part of our team,” Grainger said, “but I think we have just as many guys who can back him up and work around it.”

Imagine not having to wait until Sunday when coaches upload game film to Hudl to parse through the previous week’s plays.

Or, just look on the Coeur d’Alene sidelines.

The Vikings fashion two televisions back-to-back, fit with a wireless router, and feed real-time instant replay footage and film breakdown on their sideline to give players who just came off the field a chance to dissect what just happened. For coaches, it allows a real-time visual to instruct off of.

Amos said most of the 5A schools they face also have the technology set up. Lewiston, however, did not.

Griffin didn’t play much offense at Gonzaga Prep last season, so he’s had to learn a new position — and playbook — on the fly for the Vikings.

Sure didn’t show on Friday.

After spinning his way to a statewide highlight in Week 6, Griffin again delivered the biggest gain of the game. When Gunner Giulio’s 60-yard zig-zag scamper was called back, Prka hit Griffin on a slant over the middle on the next play and Griffin did the rest, jetting past the Lewiston defense untouched for an 84-yard touchdown.

See it for yourself.

Lang and Grainger’s first connection — a perfectly-executed 58-yard passing touchdown in the second half to put the Bengals on the board — was a close second.

Vikings are wary of a slip-up. But nothing has indicated that will happen.

No team has slowed, stalled or stymied the defending 5A state runners-up to date this season.

“With only three league games, you can’t afford a slip-up,” Amos said. “If you lose one game, you’re going from hosting the first round to driving to Boise or Pocatello. That’s a big deal.”

The Vikings are first set on sweeping the 5A Inland Empire to earn a bye and avoid an early road loser-out situation. Is it over-caution? Perhaps. After all, CdA has outscored opponents a combined 88-20 already this season.

“Prka’s better than last year. I thought he was really sharp tonight. Threw some throws that, you know, guys are in position and it’s the kind of thing where you’re just like, man, good play on them I guess.”

Stats courtesy of The Lewiston Tribune