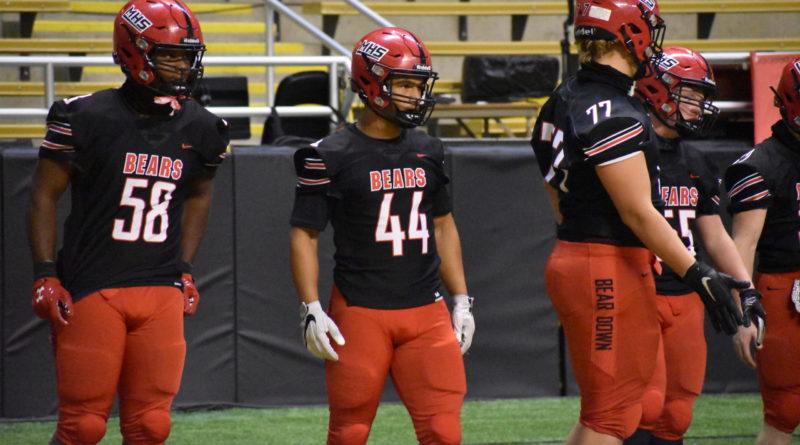 MOSCOW – This has to be more fun than playing intramural football, correct?

Of all the classifications of Idaho football, most coaches would say Class 4A has the deepest quality of teams.

Add Moscow High School to the list: The big-play Bears held off Lakeland, 30-22, in the Kibbie Dome on Friday night.

Utah commit Jonah Elliss ran a double reverse for a touchdown, returned a blocked field goal for a score – and put the game on ice for the two-time defending 4A Inland Empire champions with his 35-yard reception on third and long in the closing minute.

“All my older brothers made it to the state championship – or won state titles,” said Elliss, the state’s top senior recruit who plays defensive end and tight end..

“I haven’t made it there yet. That is my biggest goal right now. And I think we are going to make it.”

Devon Suko passed for 178 yards and a touchdown, and John White rushed for 131 yards and a score in a losing effort for the Hawks.

Here are five takeaways from the Moscow-Lakeland game:

IN 4A, MOSCOW IS THE LITTLE ENGINE THAT COULD … GO FAR

When Phil Helbling took the head job at his alma mater in 2012, he knew the reality of the situation.

The Bears dressed 22 players for the varsity game Friday night, which is smaller than most 4A schools. What they don’t have in quantity, they do have in quality, led by Elliss and quarterback Chad Redinger.

“I knew these kids when I saw them in eight grade  … they were going to be a special group,” Helbling said. “We’ve found a way to piece together a good football team.”

It wasn’t easy: A few weeks into their preseason camp, the Bears were informed their season would be canceled because of the COVID-19 pandemic. Instead, the Moscow School District offered its student-athletes the option to play intramurals.

But a few weeks later, the district board reversed its course, voting to reinstate the football season – and the Bears have taken advantage of their new lease on life.

“This year, the way everything has gone … I am proud of our guys and the  way they’ve hung in there, fought and clawed,” Helbling said.

Four minutes into the game, the Hawks were in position to grab a quick 3-0 lead on a chip-shot field goal.

The tone of the whole game changed on Tyler Skinner’s blocked kick for the Bears – and Elliss’ 70-yard return for a touchdown.

That 10-point swing appeared to be the biggest blow, even after Elliss’ got loose on a 49-yard double-reverse touchdown run with 51 seconds remaining that gave Moscow a 20-7 lead.

But of all the “gut punches,” Lakeland coach Tim Kiefer thought the one tht did the most damage was Moscow’s 80-yard scoring drive (Leon Hutton’s 2-yard touchdown run) that began at the end of the first quarter – and ate up nearly 91/2 minutes off the clock.

“Truthfully, it was that drive,” Kiefer said. “They could not replicate it the rest of the game, but we had some breakdowns in the communication with checks we had with their formations. Once we figured that out, we played much better.”

THIS ELLISS TEENAGER MIGHT BE OK IN THE PACIFIC-12 CONFERENCE

Here were the Elliss highlights from Friday:

He had a team-high 12 tackles, including four tackles for loss. Two of them were sacks of Suko.

Elliss had the blocked-kick return for a score. He scored on a trick play. And, of course, he caught the crucial 35-yard pass at the end of the game.

After the game, he chuckled over how he scored on the blocked field goal.

“My job was to blow up the kid in front to try and get everyone else free off the edge,” Elliss said. “And then Tyler blocked it, and I am like, ‘Let’s go’. but I am way far back from the ball.”

Except everybody else stood around as the ball was rolling back toward the other end zone.

“I thought somebody else was going to pick it up – but everybody stopped moving,” Elliss said. “So I was like, ‘I will take that now, all the way for a touchdown.'”

Elliss said the double-reverse run was a play Helbling put into the game plan Thursday afternoon at practice.

WHILE RECRUITERS CONTINUE TO WATCH ELLISS, THEY SHOULD ALSO LOOK AT THE GUY RIGHT NEXT TO HIM

The only other player who could possibly upstage Elliss on the stat sheet Friday night was his teammate on the defensive line.

“He is filthy,” Elliss said. “I have been saying ever since sophomore year, he is going to be D1.”

Skinner has gone through a physical transformation in the offseason. He said he grew four inches and gained 40 pounds – and is up to 6-5, 285.

“And I don’t think I am done growing yet,” Skinner said.

“I’ve been living in the weight room over the summer, especially the last two months. For sure, I consider myself someone who should play somewhere big. I grew late, so haven’t gotten the looks I wanted.”

The Bears were in bad shape. Redinger, the team’s dual-threat standout, was on the sideline with a knee injury that knocked him out of the rest of the game.

So Hutton, normally a wide receiver, came on to play quarterback. He ran the ball two times so Lakeland would use its final timeouts.

With the Bears facing third and 10 near midfield, Helbling decided to let Hutton take a shot downfield with his first (and only) pass.

“I think everyone would look at it and say it was a gusty call,” Helbling said. “He is our third-string quarterback. They were loading the box, and I felt our best opportunity here was to isolate Jonah.

“I told him to get (Elliss) the ball because he will have one-on-one coverage. And in a pressure situation, for him to throw a good ball like that was huge.”