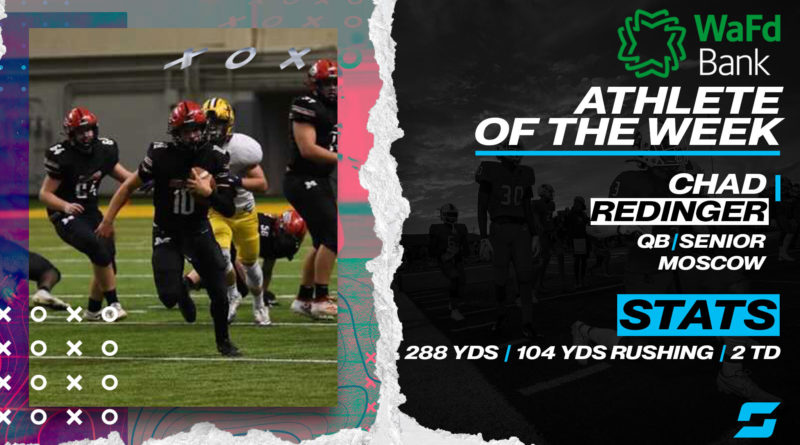 Redinger threw for 288 yards and ran for 104 more and two touchdowns in Moscow’s 28-20 win over Lewiston.

We are currently accepting WaFd Bank Athlete of the Week nominations for the week of Oct. 5-11. If you would like to nominate an athlete, please email regan@scorebooklive.com or tag us on Twitter or Instagram at @sbliveid.

Here are the other athletes who were nominated for Sep. 28 – Oct. 4:

Sean Austin, Kuna QB: Threw for 318 yards and two touchdown passes on 27 of 42 passes completed in a loss to Rocky Mountain.

Caleb Ball, Mullan-St. Regis RB: Ran for 189 yards and three total touchdowns — three rushing, one a reception – in a win over Lakeside, per The Spokesman-Review.

Jacob Butler, Nampa WR: His quarterback was feeling it and so was he — catching eight ball for 130 yards and three touchdowns. (READ MORE)

Max Clark, Capital QB: Aired out 302 yards and three touchdowns in a shutout of Boise, per the Idaho Statesman.

Jackson Dines, Homedale QB: Threw three touchdown passes to three different receivers and ran in another in a shutout of Parma.

Jordan Erickson, Rocky Mountain WR: Caught three touchdown passes of 25 or more yards and ran one in, too.

Clayton Franssen, Skyview QB: Finished with 173 yards through the air and 51 more on the ground on 16 of 27 passes completed and two touchdowns as Skyview beat Borah, per the Idaho Press.

Kyron Garner, Sugar-Salem QB: Threw for 216 yards on 10 of 11 passes completed with three touchdowns — and the win.

Tanner Langley, Coeur d’Alene S: The junior was involved in two game-altering turnovers. He pounced on a fumble in the second quarter, then blocked a punt and returned it for touchdown in the third.

Javon Lindeman, New Plymouth: Ran for 127 yards with three touchdowns, including a pick-six in a win over Nampa Christian.

Isaac Plew, Nampa QB: Went 16 of 21 for 276 yards and four touchdowns in a momentous win over Vallivue. (READ MORE)

Austin Ramirez, Blackfoot RB: Took 14 carries for a career-high 135 yards, standing tall in a loaded backfield in a 15-14 win over No. 10 Hillcrest. (READ MORE)

Kobe Warr, Rocky Mountain QB: Threw for 214 yards and four touchdowns in a win over Kuna.

Tiger Adolpo, Rigby QB: Passed for 275 yards and two touchdowns, and rushed for 102 yards in win over Idaho Falls.

Hunter Miller, Idaho Falls WR: Caught a 75-yard TD pass among his eight catches for 121 yards in loss to Rigby.

Zach Park, Pocatello QB: Passed for 244 yards, and accounted for all four touchdowns (three passing, one rushing) in first half of win over Burley.