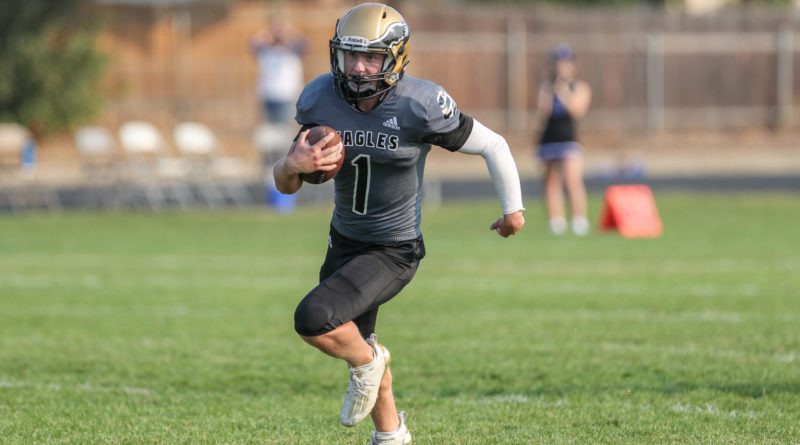 And it got one — albeit in the unlikeliest of places.

Avery Downey, who was the junior varsity quarterback just a day earlier, came off the bench after an unfortunate injury to starter Max Clark to help the Eagles earn a spot in the inaugural 5A Southern Idaho Conference Championship game by winning the SIC East with a 25-0 shutout over crosstown rival Timberline Friday night.

The junior combined for nearly 200 yards of total offense and had a hand in all four Capital touchdowns. He went 9-of-16 for 133 yards and two touchdowns through the air. Downey had 61 yards and another two scores on the ground for the Eagles (3-0), who with their 18th straight win over the Wolves (2-1), claimed a first-round bye at state and their first pod title since 2016.

“Man, it’s amazing,” Downey said. “I mean I haven’t been a starter the last couple of years. Max has done a fantastic job. Having to step in and fill his shoes is big shoes to fill, but the W feels great.”

Capital’s offense stalled for the first 19 minutes of the game. It either went three-and-out or turned the ball over on downs during its first four possessions of the game. And to make matters worse, According to Capital coach Todd Simis, Clark suffered an apparent broken collarbone injury midway through the opening quarter. But the junior starting quarterback, who scored seven TDs in his debut two weeks ago, still gutted it out until the second quarter so Downey wouldn’t go over the allotted five-quarter rule.

“He’s selfless,” Simis said. “It’s bittersweet because he’s worked so hard. My heart just goes out to him. But he’ll become my 11th coach now because he knows the offense as well as anybody.”

Despite feeling like he was going to “throw up” upon going in, Downey showed promise early by completing his first five passes before the drive halted at the Timberline 6-yard line. But he led three consecutive scoring drives to end the half.

He recorded his first-ever varsity touchdown in style with a 41-yard strike to junior wideout Ethan Castillo with 4:11 remaining. Downey then used his legs for a 30-yard touchdown run on a quarterback keeper less than three minutes later. He closed the first half with a 14-yard throw to junior wide receiver Kody Walk, who somehow managed to put both of his feet down in the back quarter of the end zone with 15.7 seconds left.

The result was an 18-0 halftime lead.

Downey capped his day by scrambling for a 16-yard score to give Capital a 25-0 advantage at the 7:29 mark of the third quarter.

“You couldn’t expect anything more from him,” senior wide receiver and free safety Jackson Reed said. “It’s a tragedy what happened to Max with how much work he’s put in. But it’s been a battle in that quarterback room since day one. And Avery’s been ready since the very beginning, so to come out here, and to perform that way in such a big, big game, it’s amazing.”

Perhaps even more impressive was the play of the Eagles’ defense, who held the Wolves to a mere 53 yards of total offense.  Timberline only had 6 yards and one first down in the first half. And the first down was a result of a Capital personal foul penalty. The offense never crossed midfield in the first 24 minutes of the game.

Even when the Wolves got the ball in Eagles’ territory, it didn’t matter. They started their first drive of the second half on the Capital 40 after the Eagles had to punt out of their own end zone. Timberline drove the ball down to 25 before Max Spielman threw an ill-timed pick to Reed in the end zone. That was the closest the Wolves came to scoring all game.

Reed’s interception was one of two turnovers forced on the day by Capital, which also forced seven punts, four turnovers on downs and held All-State and the 5A SIC’s leading rusher last season (1,117 yard) to just 56 yards on 25 carries.

“Our D played unbelievable,” Simis said. “I mean what else can you say? They were ready to go, I’ll put it that way.”

Walk recorded a game-high six receptions for 82 yards for the Eagles, who close the regular season against rival Borah next Friday at 4 p.m.

Timberline finishes its regular season against Skyview next week at 7 p.m.