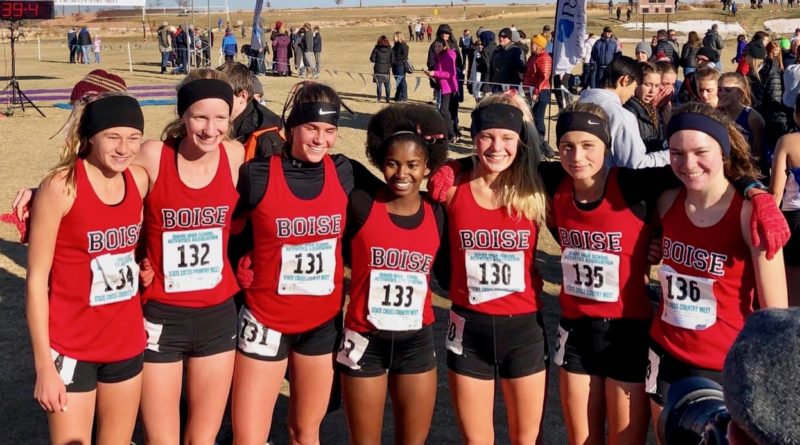 Aaron Olswanger has only been the cross country program director at Boise High School for four-plus seasons, and he is already seeing signs of dominance.

His two-time defending Class 5A girls team had a target heading into this fall season, but now … it just got bigger.

The Braves are now No. 1 in the country, according to MileSplit.com (and first reported by the Idaho Press).

“It has been building,” Olswanger said. “We’ve steadily improved every year … and this fall, we returned five all-state runners, then picked up the best 1-2 freshmen punch in the country.”

To put in perspective how deep this lineup is, Olswanger has girls who won big meets last season that might not make it to this year’s Idaho high school state championship meet at Eagle Island State Park.

1. SAMMY SMITH, ninth grader: A nationally-ranked nordic ski racer, she is the team’s most relentless competitor who refused to be outworked. Also a varsity soccer player in the fall, her 5-kilometer time (17:35) is eight seconds faster than the next-fastest runner.

2. ALLIE BRUCE, ninth grader: Smith flashes her speed on the road while Bruce is a tremendous trail runner. Olswanger said the newcomer can “run forever,” and benefits from training with her classmate. Also a soccer player at Boise.

“It has worked itself out,” he said. “They know these two girls. They would go watch their junior high races.”

3. ROSINA MACHU, senior: A top-six finisher in all three of her previous state meets, Machu is the shining example of consistency. Also the unquestioned team leader, she has her best summer of training, dropping her 5K time a good 30 seconds.

The next three spots in the lineup will likely flip among three runners, Olswanger said.

T4. JAMIE HAMLIN, junior: The team’s most versatile track athlete projects to be a steeplechaser like her sister, Emily, who competed at the University of Washington. Hamlin came to distance running as a ninth grader, and her coach remarked she has “a lot of room to grow.”

T4. LOGAN SMITH, junior: The older sister of the team’s top runner, Smith sat out last season due to soccer-related injuries. Olswanger considers her a bonding agent – “people unite around her,” he said. Now healthy, she trained a lot in the summer with her talented sibling.

T4. ANDREA CERNUDA, senior: This international student from Spain spent last season on the junior varsity as a transfer from Washington. Much like Molly Elliott, the team’s lone senior graduate last spring, Cernuda is a nationally-ranked tri-athlete who has signed with San Francisco.

And then two underclassmen round out the top eight.

7. LYDIA NANCE, sophomore: The team’s loudest personality also has one of the highest ceilings for racing. Olswanger said the teenager “has so much talent,” but is still experimenting what the most effective strategy for racing is.

8. ANNIKA ZUSCHLAG, junior: Seemingly out of nowhere last season, Zuschlag came on to occupy the No. 5 spot in the lineup for the postseason. Olswanger calls her a big-meet racer who takes a little longer than most to find her conditioning, which is usually by midseason.

“Every day, I am in awe watching them work out, then race,” said Olswanger, a former Idaho State men’s distance runner. “And to see them get along, we don’t have those petty disagreements other girls’ teams do.”