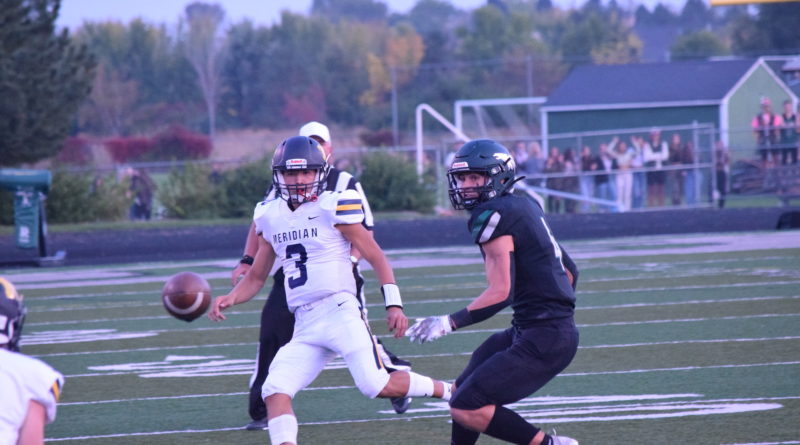 EAGLE — The Eagle High School football team has been known for its offense this season.

The Mustangs have arguably the state’s best player in senior quarterback Ben Ford. And Ford (11-of-13, 131 yards and two touchdowns through the air and 144 more yards on the ground) and the rest of the offense had another impressive night with 461 yards of total offense, including 330 rushing yards.

But their defense proved to be the real hero. No. 5 Eagle (3-1) had a goal line stand and a blocked punt that turned the tide of the game in a 49-21 win over Meridian Friday night in 5A Southern Idaho Conference West Division action at Thunder Stadium.

“Those 11 dudes, tough, great players, just athletic and strong, can move,” Ford said. “They balled out tonight and did a great job.”

The Mustangs were reeling early.

The combination of a Meridian 15-play, 68-yard scoring drive to open the game and a rare Ford interception had them on the verge of going down 14-0 eight minutes in. The Warriors (3-1), who were off to their best start in 13 years, had a first-and-goal at the 1-yard line.

But then Eagle senior defensive lineman Cortland Horton showed why he has Division I offers from the likes of Air Force.

Horton shot through the A gap and forced Meridian halfback Kross Antonnacchi to cough up the ball with a massive hit five yards behind the line of scrimmage. The loose ball ended up in the hands of fellow senior defensive lineman Drew Tadje.

“That was a game-changer,” Horton said. “It kind of set the tone and just everyone got hyped up.”

Eagle turned the fumble recovery into points on the first of two touchdown passes from Ford to senior wide receiver Cannon Morgan on a 7-yard hookup to tie the game at 7-7 36 seconds into the second quarter.

The Mustangs then forced a three-and-out on the Warriors’ ensuing possession. And it was Brett Tommasini’s turn to make a play.

The senior linebacker and younger brother to last year’s 5A SIC Defensive Player of the Year Derek Tommasini, who is now at the University of Idaho, saw his chance when lineman Luke Swenson pushed the Meridian right guard out of the way. Brett Tommasini squeezed through the A gap and laid out for the block. It set the Eagle offense up with a first-and-10 at the Warrior 22-yard line.

“It was pretty exciting,” Tommasini said. “I loved it. I’m going to remember that one for a while.”

A few short players later, senior tailback Jackson Stampfli scored the first of his three rushing TDs on a 3-yard run to give the Mustangs their first lead of the game at 14-7 with 8:41 left in the half.

“I think our defense is a little underrated,” Horton said. “But I think as a whole team, we just come together and get stuff done.”

The Mustangs scored 28 unanswered points before Meridian finally got back on the scoreboard on a 6-yard TD pass from Malakai Martinez to Antonnacchi with 9:29 remaining in the game. The Warriors closed the gap to 35-21 on a 2-yard TD pass from Martinez to Davis Thacker and a 2-point conversion from Martinez to Blaze Tokioka with 5:26 to go. But Eagle put the game away for good with back-to-back scores moments later. Gavin Diffey connected with Jaxon Buck on a 31-yard strike before Ethan Mikita capped it with a 7-yard run.

Stampfli finished the game with 130 yards and three TDs on 16 carries for the Mustangs, who will now have the week off before closing the regular season at Centennial on Oct. 16.

Martinez went 28-of-45 for 264 yards and two touchdowns in the loss for the Warriors. They will also have next week off before hosting Rocky Mountain in the season finale.