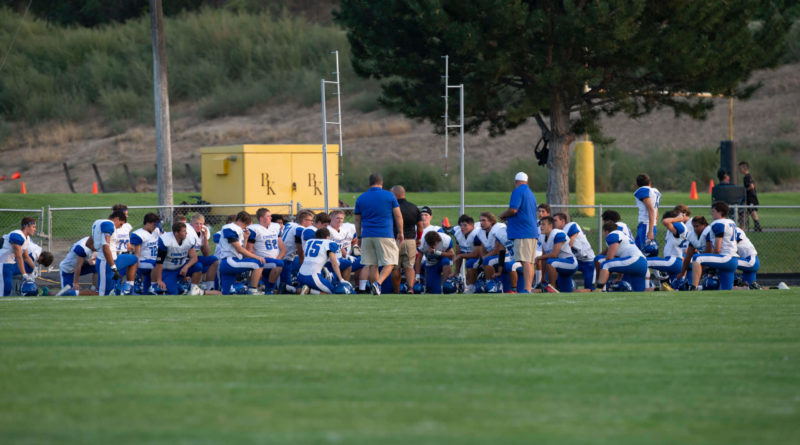 An Idaho high school football game between Emmett and Caldwell was canceled at halftime on Friday night after an incident with Ammon Bundy.

Bundy, an anti-government agitator who led the 2016 armed occupation of the Malheur National Wildlife Refuge Center, refused to wear a mask upon entering the game at Caldwell High School.

Caldwell School District officials said the game was canceled after a “threat to the safety of the school was made” in the form of a 911 call, reports the Idaho Statesman.

Caldwell Police told KTVB that after refusing to put on a mask, Bundy hopped a chain-linked fence around the field to watch the game. When the school’s principal asked police to arrest Bundy, officers refused, telling the station he “wasn’t out of control and didn’t appear to be a threat to anybody.”

“I’m very disappointed that something an adult has decided is a part of their political agenda had to spill over into a high school football contest,” Emmett coach Rich Hargitt told SBLive Friday night. “I’ve done this for 22 years and it’s always been in my priority to do what’s in the best interest of kids, and I don’t think some things adults did tonight were in the best interest of kids. I was very, very disappointed kids were not allowed to be the focal point of the evening and there’s a lot of people that owe Caldwell and Emmett’s kids an apology.”

It is unclear if the result will be considered final, or if the game is considered a forfeit, cancelation or will be rescheduled. Hargitt hopes the game will be declared completed at 24 minuets of live action and the score and statistics will stand.

“There are some other potential solutions including potentially going back and playing the second half,” Hargitt said. “I don’t think at this point that’s probably going to happen.”

Bundy said he was trying to watch his son, who is a junior at Emmett and listed on the Huskies’ roster, play. In a video of the incident posted to the Bundy Ranch Facebook page, Emmett coaches walked over at halftime after being made aware of the situation and tried to reason with Bundy. Hargitt was one of them. (Video below)

Bundy was headstrong in his response.