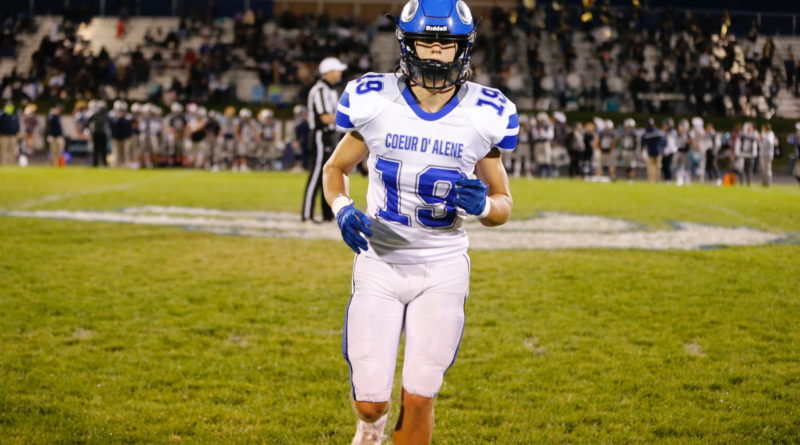 As soon as Blackfoot High School football coach Jerrod Ackley sent out his kicker, he began hearing the pleas.

Standout tailback Teegan Thomas wanted to go for the win. Fullback Rich Moore came over and echoed the same sentiment as his backfield mate.

Trust us to go get it.

And the first-year coach did.

After the Broncos scored a touchdown with more than a minute remaining, Ackley called timeout to put his offense back on the field to go for the two-point conversion – and victory.

Thomas rumbled in on a conversion run, and fourth-ranked Blackfoot escaped with a 15-14 home victory over No. 10 Hillcrest on Friday night.

Hillcrest had one shot on a desperation pass from the Broncos’ 41-yard line, but it felt incomplete in the end zone as time expired.

Afterward, Ackley called the do-or-die sequence “one of those moments as a new coach, when your kids say put your faith is us, you listen.”

Of course, the team on the other side factored into the decision, too.

Hillcrest’s power rushing attack erased an early 7-0 deficit to take a 14-7 lead on quarterback Demik Hatch’s 17-yard run with 4:45 to go in the third quarter to cap an 11-play, 84-yard march.

‘”That offense is made for an overtime,” Ackley said.

The Broncos just couldn’t get much going on offense – except from running back Austin Ramirez, a sophomore who tallied a career-high 135 yards on 14 carries.

With five minutes remaining, Blackfoot rode Ramirez and Thomas (84 yards on 20 carries; two catches, 12 yards) down the field 80 yards to get into position for a game-tying touchdown.

After the huddle deliberation, Thomas busted through the line for the game-winning conversion.

“A lot of guts, a lot of fight and I am very proud,” Ackley said. “This is one of those wins you can build the next half of the season on.”

For a moment — more than a quarter – Post Falls felt like it had the top-ranked Vikings right where they wanted.

A fleeting moment it was.

Coeur d’Alene forced back-to-back second quarter turnovers to turn a one-touchdown game into a complete stranglehold on Friday night, as the No. 1 team in 5A continued its tear through Northern Idaho.

“Coeur d’Alene’s a very good football team,” Post Falls coach Blaine Bennett said. “Once they got the momentum, we never could get back in the game.”

Coeur d’Alene quarterback Jack Prka accounted for five touchdowns on the night, including two rushing and touchdowns through the air of 47, 35 and 13 yards.

Post Falls (3-2) standout wide receiver Tommy Hauser caught a 20-yard touchdown pass from Jaxon Anderson to even the score at 7-7 late in the first half. The No. 8 Trojans were pleased with how their defense kept the field long for the Vikings.

After Post Falls recovered a fumble in the second quarter, quarterback Jaxon Anderson was picked off on a throw to the sidelines and the Vikings scored a couple plays later to make it a two-score game.

Coeur d’Alene junior Tanner Langley pounced on a fumble on the ensuing kickoff, and Prka found Alex Karns in the end zone two plays later to push the lead to 21.

“We certainly wanted to make them drive the length of the field and make plays, and we certainly did that early on, but once you give them a short field,” Bennett said. “You just can’t turn the ball over to a team like that.”

Given that he has a squad full of experienced veterans, Knights coach Tim Brennan really couldn’t believe what he was watching in the first half of a key 4A SIC road game.

Committing mistake after mistake, second-ranked Bishop Kelly found itself trailing 23-7 to the No. 5 Vikings at the intermission after three Ky McClure first-half touchdowns passes.

But the Knights weren’t flustered or deflated. They calmly talked about necessary adjustments in the locker room.

“We talked about scheme-wise what we need to do to get back into it – and that we were better than what we showed,” Brennan said. “Our kids did rally, and stepped up in different positions.”

The key play came early in the fourth quarter. After Bishop Kelly cut it to 23-21 on Seth Knothe’s 6-yard touchdown run, the Knights opted for a pooch kick by Sam Pape.

And wide receiver Jack Heffner sprinted down the field to recover the live ball at the Middleton 25-yard line.

That set up Colby Weikert’s go-ahead 3-yard touchdown run – and the Knights made two defensive stops over the final eight minutes to turn away the Vikings, including Keegan Croteau’s Hail-Mary interception in the end zone in the closing seconds.

“In the second half, they came out and played football,” Brennan said.

Bulldogs coach Dan Holtry thinks his in-the-shadows senior group is starting to make a name for itself.

A week after upending then-No. 1 Emmett in the minute, host Nampa knocked off the last remaining undefeated team in Class 4A.

Quarterback Isaak Plew tossed two of his four touchdown passes on the final nine minutes, including the game-winning 9-yard strike to Jacob Butler with 49 seconds remaining to turn back the No. 3 Falcons.

“I am really proud of these seniors. They’ve matured a ton in these last few weeks,” Holtry said. “Right now, 2020 is a world of unknowns. They don’t know if the next day (because of COVID-19) if they are going to shut us down … so they are making the most of every night.”

Oddly enough, it was the play Plew had to go to the sideline after a big hit that sparked the Nampa offense.

With the Bulldogs trailing 13-0 in the second quarter, Colton Seable – the team’s projected preseason starting quarterback – came on and threw a 23-yard score to Butler.

After that, Plew (276 passing yards, four TDs) and Vallivue’s Casey Cope (two passing TDs, two rushing TDs) went back and forth – until the Bulldogs were able to go 61 yards in the final five minutes to grab the game-winning score.

“When Ryan (Schuler) went down, we knew we had to … put this on the shoulders of our senior receivers (Butler and Seable, who moved to a new position full-time last week).”

A 4A Southern Idaho Conference game between Emmett and Caldwell was called off at halftime due to an incident in which conservative agitator Ammon Bundy refused to wear a mask.

Emmett (4-2) led Caldwell 35-0 at halftime, when the game was called off. Whether the score will stand as is, the game rescheduled, forfeited or nullified is unclear, though Emmett coaches are confident the result will stand.

“I’m very disappointed that something an adult has decided is a part of their political agenda had to spill over into a high school football contest,” Emmett coach Rich Hargitt said.