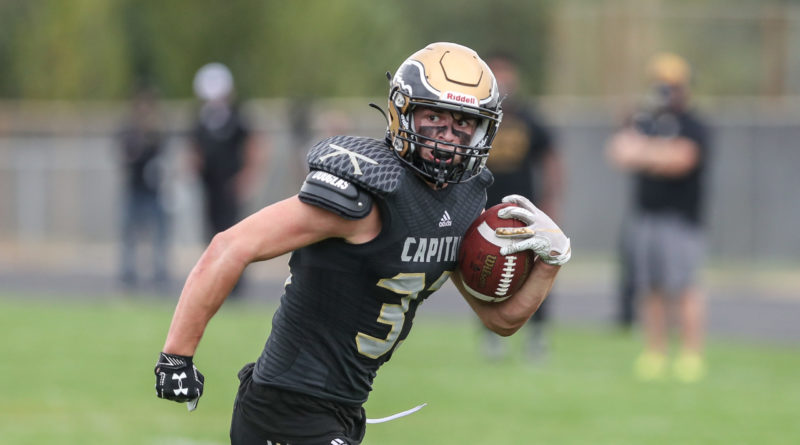 Here are the top performances that caught our attention across the state in Week 5 of the Idaho high school football season. Tag us on Twitter or Instagram @SBLiveID if we missed anyone. Names are in alphabetical order. (Lead photo by Loren Orr)

Talk about a debut varsity start. Clark threw 253 yards and six touchdowns in the air, and another on the ground in Capital’s 55-12 win over Skyview. (GAME STORY / PHOTO GALLERY)

Accounted for 149 yards of offense — 109 rushing and 40 receiving — as well as two touchdowns in a 40-20 win over Idaho City, reports the Idaho Press.

Logged 86 yards and three touchdowns on the ground in a 52-7 win over Columbia, reports the Idaho Press.

Accounted for 129 receiving yards and the team’s lone touchdown catch in a 24-6 loss to Lewiston. (READ MORE)

Rushed for 208 of his team’s 287 rushing yards and threw two touchdowns in a 32-12 upset win over the No. 2 team in 3A, Gooding. Matthews has shown full command of the offense after returning from Tommy John surgery.

Ran for 104 yards and a pair of touchdowns in a 49-13 win over Boise, per The Idaho Statesman.

Doesn’t get much more efficient than this: three catches, 85 yards, three touchdowns in a 54-0 win over Caldwell.

Threw for 205 yards, rushed for 65 more and five total touchdowns, including the game-winning touchdown in a 41-40 win over Emmett. (READ MORE)

Threw four touchdown passes — three more than 25 yards — and ran in another as Coeur d’Alene took downs its first 5A opponent and rival Lake City.

Threw four touchdown passes to lead Payette to a momentous 31-28 win over Parma —its first league win since 2014, reports the Argus Observer.

Tossed for 233 yards on 13 of 18 passes completed and three total touchdowns in a 49-13 win over Boise, per The Idaho Statesman.