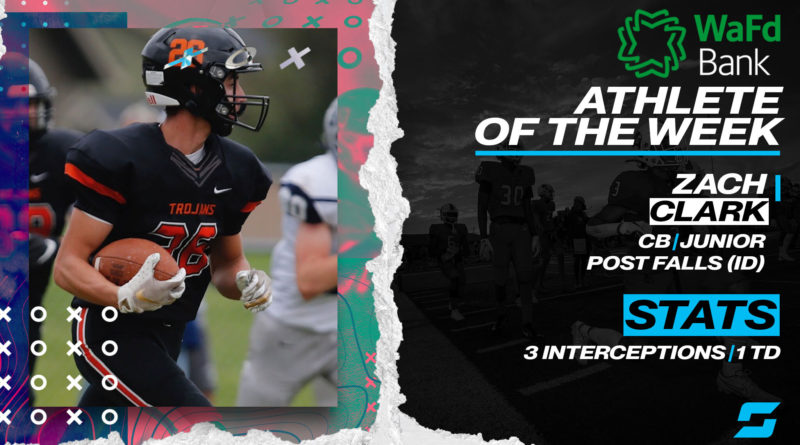 Clark had three second-half interceptions, including one returned 22 yards for a touchdown in the team’s 34-13 win over Lake City.

We are currently accepting WaFd Bank Athlete of the Week nominations for the week of Sep. 21-27. If you would like to nominate an athlete, please email regan@scorebooklive.com or tag us on Twitter or Instagram at @sbliveid.

Here are the other athletes who were nominated for Sep. 14-20:

Sean Austin, Kuna QB: Threw for 275 yards and five touchdowns to lead Kuna to its first win in 5A, over Centennial, 48-8.

Casey Cope, Vallivue QB: Accounted for 228 yards and two touchdowns in a win over Middleton.

Easton Durham, Highland QB: Accounted for all four of his team’s touchdowns — three rushing, one passing — in a 31-7 Black and Blue Bowl win over Pocatello.

Clayton Franssen, Skyview QB: Threw for 283 yards, ran for 88 more and seven total touchdowns in a win over Boise.

Max Lehman, Rocky Mountain RB: Rushed for 206 yards and two touchdowns in a 22-15 win over Eagle.

Jackson Stampfli, Eagle RB: Rushed for 187 yards and two touchdowns in the loss to Rocky Mountain.

Caden Young, Emmett QB: Passed for 193 yards and three touchdowns, and rushed for 57 yards and another score in the victory over Ridgevue.

Liam Reeves, Timberline DB: Intercepted two passes, and recovered an onside kick in the fourth quarter in the team’s win over Borah.