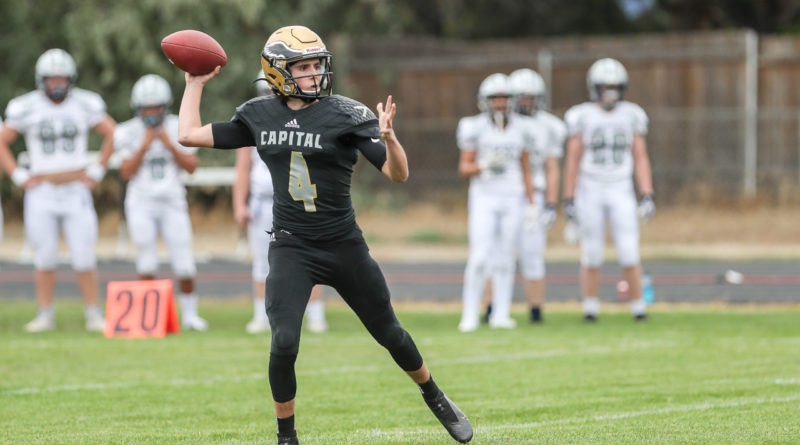 BOISE — The Capital High School football program had seemingly done it all in its prestigious 55-year history.

But it checked off another milestone Friday night.

The Eagles played the first-ever game on campus. And they commemorated the occasion with a 55-12 drubbing of Skyview in a 5A Southern Idaho Conference East Division game.

“It was pretty special, especially with the circumstances of not knowing if we were going to play,” Capital coach Todd Simis said. “I’ve never coached a game where I walked out of my own school. So this is a first for me and this new experience was kind of fun.”

Capital (1-0), along with the three other Boise School District schools (Boise, Borah, Timberline) had played its home games at Dona Larsen Park since 2012. But when Boise State, which owns the stadium, closed all its athletic facilities in August, the Eagles had to prepare their longtime practice field for an actual game.

“I’m surprised the scoreboard still works,” a spectator on the sideline was heard saying.

The scoreboard held up through the Eagles’ offensive onslaught

They scored eight touchdowns and racked up almost 400 yards of total offense. Max Clark was responsible for the majority of those numbers.

The junior quarterback, who was making his first career varsity start, accounted for seven TDs and 264 yards of offense. He ran for 11 yards and a score. But the bulk of his production came through the air. Clark went 11-of-21 for 253 yards and 6 TDs. They were the most by an Eagles’ quarterback since University of Montana alum Makena Simis threw six against Vallivue on Sept. 14, 2012.

“Records are not my main priority. It’s just a great overall team victory,” Clark said. “It’s not possible without the men up front, the skill guys taking it to the house for me and the defense getting stops.”

The majority of Clark’s throws went to Jackson Reed. The 6-foot-1 receiver tallied seven receptions for a game-high 139 yards and four touchdowns. He had touchdown catches of 2, 47, 40 and 24 yards — all in the first half.

“I would say a lot of people should dress up as him for Halloween, because he’s going to give me nightmares for a long time,” Skyview coach David Young said. “Hats off to that dude. I mean he’s playing the W, the wing, the slot, free safety, punt returner and it got to the point where we’re just like, ‘We don’t want any more of you.’”

But right now Reed is verbally committed for baseball at Seattle University. However, after games like this, Simis expects colleges to still go after him for football. And Reed said nothing is set in stone yet.

“I love them both,” Reed said. “… I’m totally open-minded to anything that comes my way for football.”

Receivers Justus Del Rio and Ethan Castillo both hauled in touchdowns passes of 48 yards, while Gabe Bacon’s 80-yard punt return to the house capped the somewhat surprisingly prolific night of scoring for the Eagles. They hadn’t played a game in 329 days and were the last team in the Treasure Valley to play a game this season.

Capital didn’t show any signs of rust, though.

“Coach Simis said it great yesterday in the pre-game practice, ‘Saving the best for last,’” Clark said. “That quote stuck with me and the rest of the team and I think we really embraced that and we took it to the field.”

Not to get lost in the fold was the Eagles’ defense. They held the Hawks to just 201 yards of offense and forced three turnovers, two of which came in the first two minutes of the game.

Josh Summers came up with two of them. The junior defensive lineman recovered Skyview halfback Atonio Fifita’s fumble on the first play of the game. The 6-foot-3, 230 pounder then nearly had a scoop and score after Hawks’ quarterback Clayton Franssen fumbled on a sack.

Cade Larson followed that up with a pick of Franssen on Skyview’s very next possession. Those three turnovers turned into a 20-0 lead and the route was on.

“I honestly felt like we could have done even better,” Summers said. “We hold ourselves to a pretty high standard on defense.”

Franssen combined for 171 yards and threw a touchdown for Skyview (1-1), which travels to Borah next week.