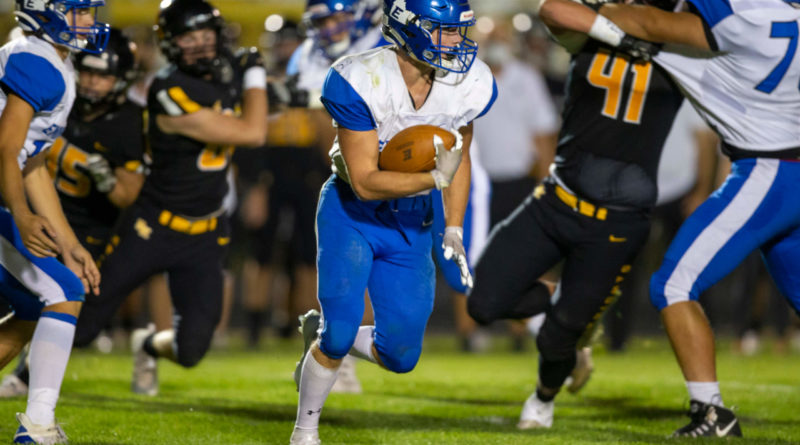 Here is an inside look at the top high school football games across the state of Idaho in Week 5. (Feature photo by Brian Losness)

Game nugget: Which school has ruled the city over the past decade? It’s been the Vikings, who won 88 games from 2010-19. Lake City collected 46 victories during that span.

About the Vikings: The top team in the state is rested and healthy after its week off, and coach Shawn Amos said Couer d’Alene “showed us what we were expecting” in its first two games. QB Jack Prka (461 passing yards, six TDs, no INT) has played like a seasoned veteran leading this high-powered offense – and he has skill-position threats all over the place, including RB Gunner Giulio (92 rushing yards, 95 receiving yards, two total TDs).

About the Timberwolves: When big-armed QB Chris Irvin (844 yards, 11 TD, eight INTs) gets time to survey the field, he has shown to be more than capable as a passer in his first season as a starter. When he gets pressured and cannot set his feet – things like last Saturday happened (six-INT game against Post Falls). Next up: Vikings standout DE Cameron Cope (31/2 sacks, two forced fumbles), a pass-rushing terror who moves around the line.

Game nugget: In the loaded 4A SIC, these two teams played in the regular-season finale last year for the final berth to the state playoffs. Nampa won at home, 35-12 – and that triggered a run all the way to the 4A semifinals for a second consecutive season.

About the Bulldogs: Even after losing so many off last year’s final-four squad to graduation, this is still a formidable group. RB Ryan Schuler (249 rushing yards, four TDs) has quick big-play burst, and will likely run a lot behind all-league first-team LG Kaliopasi Niupalau for his yards. QB Colton Seable is more game manager than playmaker in his first year at the helm. Nampa gave up 383 rushing yards to Bishop Kelly in last week’s loss.

About the Huskies: After upending No. 1 Bishop Kelly two weeks ago, the team had its share of distractions, including a town parade celebrating the win. But Emmett took care of business Friday, defeating Ridgevue. Coach Rich Hargitt would like to see QB Caden Young (771 passing yards, eight TDs; 394 rushing yards, six TDs) pass it a little more, but overall this is a balanced “Surface to Air” offense that is difficult to defend.

Game nugget: The last time Snake River started 0-3 and won its fourth game, it was 2017 (also started 0-3 in 2018 and lost in Week 4). Things went pretty well from then on as the Panthers won eight in a row to reach the 3A title game. The win that set it off? A 20-18 victory over South Fremont.

About the Cougars: You hear the same thing over and over from opposing coaches who have faced QB Kaimen Peebles (925 passing yards, 11 TDs) this season – he plays bigger than his sturdy frame (6-3, 195). Rarely can one defender bring him down, which allows him to escape troublesome spots. Expect South Fremont to spread this defense out, and attack with big-play WR WR Dallin Orme (19 catches, 435 yards, five TDs).

About the Panthers: Coach Jeb Harrison likes to quip this is the best 0-3 team in the state, but knows the wins have to come – starting now. If given time, Peebles can expose this secondary, which is a reason why the front seven, led by DE Clayton Franz (four sacks, INT), will have to constantly be in attack mode off the snap. Downhill rushing attack led by FB Treyson Shawver (300 rushing yards) and RB Chandler Coombs.

Game nugget: After years of running out of the spread, New Plymouth switched to a double-wing offense this season. That is the same offense that Aberdeen coach Jeff Duffin ran early in his tenure (2013), and learned it from Don Markham, the late double-wing guru.

About the Pilgrims: Despite its first loss last week against Fruitland, this is still a solid team finding its way in a new offense. Three rushers, led by RB Spencer Lyman (160 yards, two TDs), are all around 150 yards this season with equal carries. But QB Casey Arritola (175 passing yards, two TDs) has to do a better job of protecting the football (two fumbles against Fruitland).

About the Tigers: They’s switched to a more complicated shotgun double-wing offense, but that doesn’t mean Duffin and his staff have forgotten how the pure double-wing offense operates – and should be defended. That could be a real advantage in is expected to be a close ballgame. Aberdeen will continue to rotate QBs Leiv Mack (45-yard TD run in loss to South Fremont two weeks ago) and Justus Bright (73-yard TD run) every other series.

Game nugget: The last time these two programs met was in 2010 for the Canyon Conference Championship. Declo won on the final play, 18-12.

About the Hornets: It is pretty simple – when Declo plays a clean game, it can play with anybody, led by QB Gabe Matthews (515 rushing yards, three TDs; 258 passing, two TDs) in the all-Matthews family backfield. And that happened last week in a shutout victory over Buhl. The Hornets cannot commit the turnovers or penalties they did in their two losses to beat this high-powered Gooding spread offense in its home stadium.

About the Senators: So what is is liking facing QB Kurtis Adkinson (832 passing yards, eight TDs; 618 rushing yards, eight TDs)? He is massive (6-2, 250), mobile and marvelous at knowing when to pass or run. He has run or passed 188 times so far in four games – and will likely be tracked by Declo MLB Derek Matthews (60 tackles), a two-time state wrestling champion. TE Colston Loveland (26 catches, 278 yards, two TDs) is a top 2022 recruit.