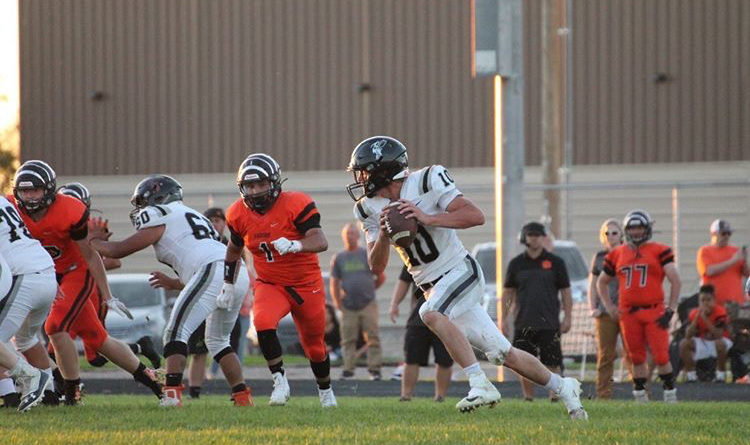 Declo football won just one of its first three games this season, thanks in part to a front-loaded non-conference schedule that includes several competitive 3A programs. It was the worst start in four years for the Hornets, who won consecutive 2A state titles in 2017 and 2018.

But one player in particular wasn’t complaining: the Hornets’ quarterback, captain and emotional leader Gabe Matthews.

Matthews sees the .500 start to the season as an opportunity to make meaningful improvements from tough tests — losses against No. 4 Kimberly (3A) and Aberdeen, as well as Declo’s Week 5 showdown with No. 2 Gooding (3A).

After all, the senior is thankful to be on the field competing.

The pain started as a sharp sear in his elbow during his sophomore baseball season, requiring ice and ibuprofen after every game. He initially thought it was tendinitis and pitched through it during most of his season.

“Until one day, it just snapped,” Matthews said.

During the summer of 2019, Josh Stewart was going through all the motions gearing up for his first year as Declo’s head football coach when, on what seemed like the eve of the season, he was handed the crushing blow that his projected starting quarterback would miss the season.

Yes, the very same player who started on the mound in the 2A state baseball semifinals as a sophomore was poised to step in at quarterback and fill a much-needed hole in the lineup for the 2A powerhouse.

“The team needed a quarterback, and that’s where I was going to step in,” Matthews said. “Being out for a year, I don’t know, it was just rough.”

Going to practice every day wasn’t enough for Matthews. He wanted to be on the field.

When Declo was hit with another stroke of bad luck, he was called upon in an unexpected way: train his brother to step-in at QB.

During the last two games of the 2019 season (Matthews’ junior year), his replacement Keegan Ramsey, a 5-foot-9 sophomore, sustained a season-ending injury. Short of options, Declo called on running back Derek Matthews to run the show. The catch? Gabe was tasked with showing his younger brother the ropes.

The two are close — and hyper-competitive.

“He picked it up pretty fast, so that’s good that he’s a fast learner,” Gabe Matthews said of his brother.

Though the two are versatile multi-sport athletes, baseball is Gabe’s favorite sport, while wrestling, bar-none, is Derek’s best sport. Football is a sport they both enjoy deeply and play without the constant worry of impressing coaches at the next level.

Football is where their competitiveness with one another is channeled toward a common team goal.

“I’m sure he was happy for his brother,” Stewart said, “but I’m sure also there’s a little bit of sibling rivalry sitting back and not being able to play, having to watch that.”

Once Gabe’s elbow was healthy and recovered, Derek was happy to hand the quarterback reigns back to his older brother. Derek, a hard-nosed, physical runner, sought the type of action only the running back slot could provide.

Gabe, meanwhile, loves the stress and responsibility of being under center.

“I’d rather have it on my shoulders than someone else’s,” Gabe said. “I feel like if I messed up, that’s my fault, instead of saying ‘what if I would have done that differently?’ ”

By all accounts, Gabe embraced the student-coaching role during his recovery. And when he returned for his senior season, teammates knew right away who their leader was.

He jumped right in, Stewart said, commanded his group and his teammates listened. Matthews was overwhelmingly voted team captain by his peers.

“It’s big to have a guy there you know you can trust,” Stewart said. “When you lose a couple games in a row, you got to have that leadership from your team to know there’s no time to panic, we’re still bought into what we’re doing — keep everybody on board.”

“We have some athletes on our team,” Gabe said. “I feel like if we do our job and work together, we can definitely shoot for a championship.”