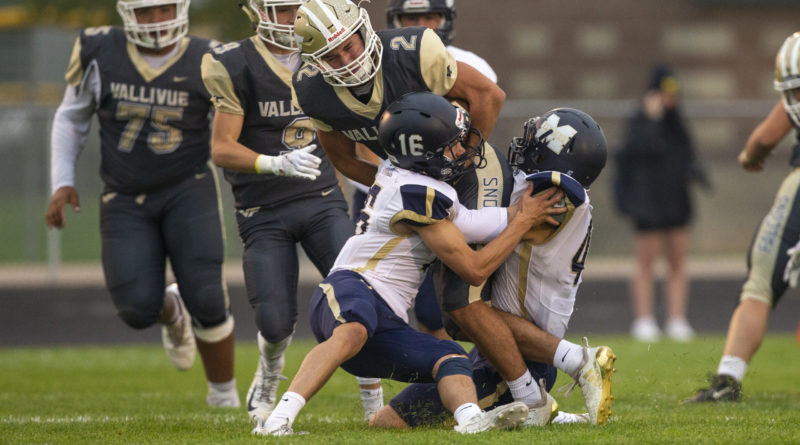 Back-to-back playoff appearances, including a state semifinal showing in 2018 to be exact.

But without two-time Idaho 4A State Player of the Year Lan Larison, who now hangs his helmet at UC Davis, the Falcons had to find another way.

The answer looks to be in the form of their defense.

No. 4 Vallivue (4-0 overall, 2-0 4A SIC) remained unbeaten by holding second-ranked Middleton (2-1) to just 181 yards of total offense and forced three turnovers for a 20-19 4A Southern Idaho Conference win Friday night.

“Probably one of the most hard fought games we’ve ever played,” senior defensive lineman Braydon Ary said. “Defensive team this year. Defense sealed it out and that’s all she wrote. I couldn’t be more proud of my guys.”

Casey Cope combined for 228 yards and two touchdowns. Lincoln Marler hauled in eight catches for 85 yards, while Santiago Diaz galloped for 63 yards and a score for Vallivue.

But the real story was the defense, which included four sacks and a two-point conversion stand at the end.

Ky McClure connected with Cash Cowdery on a 56-yard bomb to move the Vikings within an extra point of tying the game with 43 seconds remaining.

But Middleton decided to go for the win instead.

McClure looked for Cowdery again. Only the Vallivue pass rush got to him and he sailed the throw a little high.

The heads up play came after the Falcons spotted the Vikings six late points following a fumble by Diaz deep in their own territory.

“I’m telling you, these kids, they just love to play the game,” Vallivue coach Layne Coffin said. “They play hard and they don’t worry about the next play. And I think that’s what’s so unique about them. I don’t know how to explain it, it’s been a long time since I’ve seen it.”

After forcing Middleton to a three-and-out on its first possession of the game, sophomore linebacker Cannon Hyde picked off McClure. It set the Falcons up with a 1st-and-10 at the Viking 45. Three plays later, Cope scored the first of his two touchdowns on a 3-yard keeper to give Vallivue a 7-0 advantage with 6:42 remaining in the opening quarter.

“It just came back to what we were taught in practice,” Hyde said. “Our coach, he’s telling us, ‘Do our jobs, do what we’re taught,’ and that’s kind of what the scenario was there. I was there and took advantage of that opportunity.”

Middleton tied the game at 7-7 on a 5-yard TD pass from Ray Aguliar-Gallup to Tyler Medaris a little more than four minutes later. But the Falcons went on a 13-0 run on a 1-yard run by Diaz in the second quarter and a 13-yard strike from Cope to Gage Bayne in the third before its defense gave them their first 4-0 start in a decade.

“We’re on to Caldwell,” Coffin said while laughing.

Vallivue returns home to face Caldwell next Friday at 7 p.m.

Cowdery racked up eight receptions for a game-high 131 yards for Middleton, which will travel to Ridgevue at 7 p.m. on Sept. 25.

“It took us a while to get going obviously,” Middleton coach Bill Brock said. “It was kind of a disjointed effort for us. It was a great effort by our kids, but we just couldn’t get on track. We got to get better.”

5 GAMES YOU SHOULD NOT HAVE MISSED