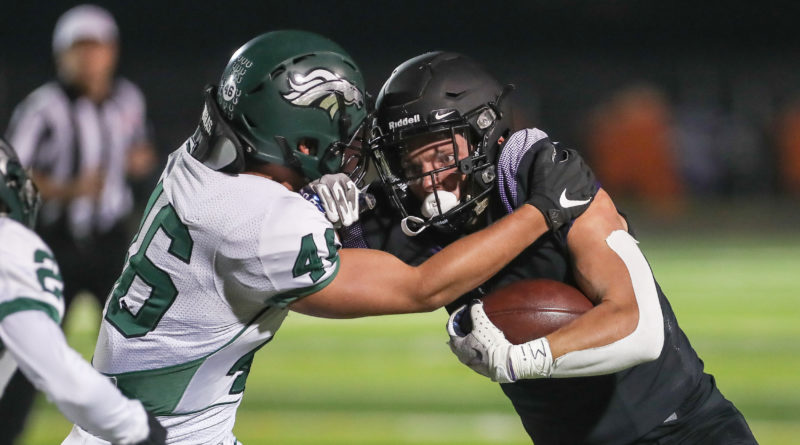 Chris Culig has been around Class 5A football long enough to know – if you want to be taken seriously as a state championship contender, you better start by winning the Boise area.

And his second-ranked Rocky Mountain Grizzles took a big step in that direction again Friday night.

After watching a two-touchdown lead disappear in the fourth quarter, the Grizzlies answered convincingly for a 22-15 home victory over No. 5 Eagle in Meridian.

For a fifth consecutive year, Rocky Mountain is the winner of the “Herb Criner Bowl” – these schools’ annual rivalry game.

And the Grizzlies have not lost in the hotly-contested 5A Southern Idaho Conference the past two seasons.

Running back Maxwell Lehman rushed for 206 yards and a pair of touchdowns, but it was quarterback Kobe Warr who led the game-winning drive.

Warr’s 31-yard completion to Mason Jacobsen set up his 8-yard go-ahead touchdown strike to Justin Douglas to give the Grizzlies a 22-15 lead with 6:52 remaining.

“He can make every throw,” Culig said. “He is just a cerebral, intelligent quarterback. And he is more mobile than people think.

“When a lot of guys might panic, he buys time. … He found a way to make some clutch plays.”

After making two red-zone stops in the first half on defense, Rocky Mountain grabbed a 15-0 lead on Lehman’s second scoring run, this time a 4-yarder with 3:31 to go in the third quarter.

Culig decided to go for an onside kick, but it backfield. Eagle tallied two quick touchdowns over the next 2:20.

And the Mustangs tied it at 15-15 on Jackson Stampfl’s 78-yard burst up the middle, and two-point conversion run by quarterback Ben Ford with 11:11 remaining.

It set the stage for the Grizzlies’ decisive march, led by Warr.

A big assist also went to the Rocky Mountain defense, which bottled up Ford. He finished with 85 rushing yards, and 70 passing yards, but no touchdowns.

“I thought we did a pretty good job,” Culig said. “A lot of Ben’s yards were when he dropped back to throw on third-and-long plays.

“He is a stud – and scary. We felt like we could not let him get going, so we packed the box.”

As if COVID-19 had not delayed the season long enough, the Wolves had to wait out a short lightning delay Friday afternoon.

Timberline coach Ian Smart wasn’t thrilled – until he looked over at his players and saw how much excitement was building within the group.

“It’s just so much easier to go with it as a player,” Smart said.

The wait was worth it – the Wolves tallied the final 19 points to snap a four-game losing streak in this series.

Holding onto a 14-6 lead early in the fourth quarter, Timberline gave itself some breaking room on Taylor Marcum’s 7-yard touchdown scamper.

Then the fun began. On a whim, Smart decided to call an onside kick.

“These kids will tell you, I am the weirdest coach to play for because I coach so much by the seat of my pants,” Smart said. “I truly believe in gut feelings.”

And he had one: He figured Borah would set up to try and get a big return, leaving the middle of the field open. He consulted with special teams coordinator Dustin Kamper, who agreed.

And the Wolves went for it on their first play – and hit it. Quarterback Max Spielman hit sophomore Gabe Alvardo, a newcomer to football from the baseball team, in stride for a 48-yard touchdown strike – and 26-6 Timberline lead with 10:20 remaining.

“This was a big one,” Smart said. “City games are always fun.”

Four weeks into the season, Skyline coach Scott Berger couldn’t help but look forward. After taking down the No. 1 team in 4A, how could he not?

“If you can be the No. 1 seed going into the playoffs, it’s huge,” Berger said.

Behind a strong rebound performance from the Grizzlies defense licking its wounds after being thrashed by Rigby in Week 3, Skyline rode disciplined coverage in the secondary and a disruptive defensive line all the way to a statement victory over top-ranked Blackfoot.

Skyline’s offense wasn’t perfect, Berger admits, but it scored in the second quarter and again at the end of the third. But the Grizzlies’ defense gave plenty of buffer holding its own against an offense that averaged more than 30 points per contest entering Friday night.

“We held them on fourth down a couple times, held them in the red zone and they never scored again,” Berger said. “Huge effort with the defense.”

After forcing an early Skyline turnover, Blackfoot (3-1) marched down and kicked a field goal to be the first on the board.

It’s the second week in a row the top-ranked 4A team has gone down, and Skyline (3-1) is determined to keep climbing.

“I have so much confidence in our offense and offensive coaches,” Berger said, “once we start clicking on (offense), watch out.”

Seth Knothe rushed for 170 yards on 22 carries and Ryan Brooks punched a pair of touchdowns to help No. 4 Bishop Kelly bounce back from a rusty debut with a convincing win over ninth-ranked Nampa.

Without a single scrimmage, camp, or games under their belts, the Knights were pleased with the way they responded after a historic season debut loss to Emmett by building a 28-0 lead by halftime.

“Our kids responded well from last week,” Bishop Kelly coach Tim Brennan said. “We definitely feel a lot better where we’re at tonight than last week. It was satisfying see where we’re at.”

How, in just one week, did they get there?

“We just didn’t make as many mistakes as we did last week,” Brennan said.

That began with scrutinizing film and ended with the Knights coaching staff simplifying defensive schemes to a new crop of linebackers.

Nampa (1-1), which opened the season with a blowout win over Columbia, scored late in the third quarter and tacked on another touchdown with three minutes left in the fourth.

Diggers coach Tyler Richins needs a break – and he will get one this week with his two-time defending 3A champions and No. 1 team on a bye.

Two overtime games this early? “It is not pleasant,” he said.

After both teams scored in the extra session, the visiting ninth-ranked Eagles decided to go for the victory with a two-point conversion, but Hunter Roche’s pass down near the right pylon was nowhere near the target.

Roche had thrown a 3-yard touchdown pass to Payton Howe in OT to cut it to 7-6.

Perhaps the best story of the night – and maybe around the state – was how the Diggers got their seventh point. It came on the foot of an unlikely contributor – senior Sunny Bennion, the daughter of defensive coordinator Dan Bennion (also former strength and conditioning coach at Southern Utah).

After do-everything standout Crew Clark broke his collarbone in the first half of the season opener, Sugar-Salem needed a placekicker. Richins floated the idea about Sunny Bennion, a soccer player, filling that role for the football team.

“She’s always been around our football family,” Richins said.

So, she joined the squad – and has been kicking the past few weeks.

But Friday happened to be homecoming. Oddly enough, both kickers – Clark and Bennion – were voted king and queen of the senior class, and had to come out in their uniforms at halftime for a ceremony.

“Ice in her veins,” Richins said.