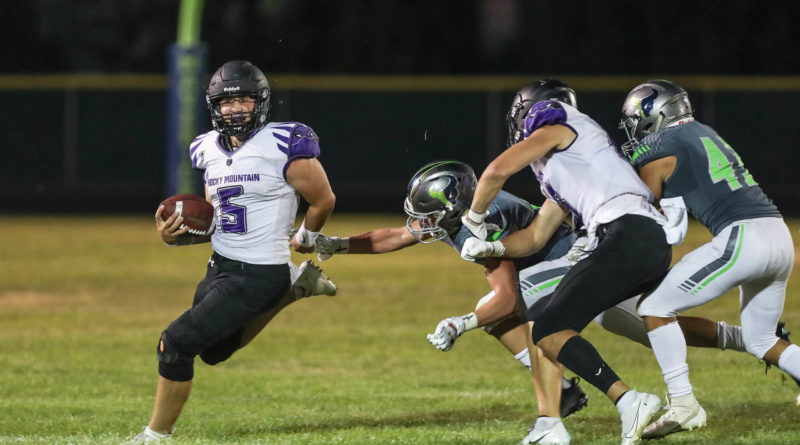 Here is an inside look at the top high school football games across the state of Idaho in Week 4.

Game nugget: Another Boise-area rivalry game with a meaningful nickname – the “Herb Criner Bowl.” This will be the fifth installment honoring the late 30-year coach who was part of both schools’ coaching staffs, and died in 2016.

About the Mustangs: They’ve endured their longest losing streak in the series – four games – with the last one coming in 2019 (19-13). The good news is that Eagle might have the element of surprise in its favor. The Grizzlies haven’t faced dual-threat QB Ben Ford (431 passing yards, 415 rushing yards, 10 total TDs) in two years. Besides being a buzzsaw runner, he is a much better passer now as a senior.

About the Grizzlies: If it is one person who seems to have his finger on the pulse of what is going on at Eagle – it is Rocky Mountain coach Chris Culig, who was an assistant on the Mustangs’ 2009 state title squad. And Culig thinks he has a fast enough set of linebackers to slow Ford down, led by senior Ty Tanner and Landon Albert. QB Kobe Warr (340 passing yards, four TDs) is a keen decision-maker who minimizes mistakes.

Game nugget: Gino Mariani, Highland’s all-time winningest coach in his 20th season, got his start in coaching as Pocatello’s junior varsity coach in 1990, and was part of three of the school’s 5A titles.

About the Indians: If Pocatello wants to snap its series-worst nine-game losing streak with a huge road upset, it better find ways to score (has not totaled more than 21 points in any game during the skid). That will be up to QB Zach Park (659 passing yards, four TDs; 133 rushing yards), who accounted for 343 yards of offense in last week’s win at Jackson Hole (Wyo.). The Indians are 3-0 for the first time since 2011.

About the Rams: How many players around the state can brag they have thrown and caught a touchdown pass, and run for one as well? Welcome to hyper-competitive QB Easton Durham’s world (375 passing yards, four TDs). He is back under center after starting at wide receiver. RB Kaleb Demuzio (337 rushing yards, five TDs) also needs touches, but will need to know where top Pocatello linebacker Hunter Killian (42 tackles) is at all times.

About the Grizzlies: In a projected close matchup, the difference might be whose athletes perform best in space. And Skyline has two good ones in WRs Eli Ames (14 catches, 216 yards, five TDs) and Connor Maloney (12 catches, 183 yards, two TDs). Coach Scott Berger is aiming to get Maloney more touches; he had three receptions last week in a loss at Rigby. That will be a challenge against Blackfoot’s speedy, experienced secondary.

About the Broncos: Last season, Blackfoot snapped a four-game skid against the Grizzlies. And not surprisingly, all-state RB Teegan Thomas was a big reason why, rushing for 263 yards in the 27-20 win. But in first-year coach Jerrod Ackley’s spread offense, Thomas is lining up all over the field. Despite facing constant double teams, the senior speedster has 265 rushing yards, 200 receiving yards and three touchdowns so far in 2020.

Game nugget: Both schools saw their 2019 seasons end in the state playoffs at the hands of the same opponent – eventual 4A champion Kuna. Vallivue lost in the quarterfinals (21-18), and Middleton bowed out in the semifinals (70-34).

About the Vikings: Lose 10 all-league performers from a year ago and still be a viable state contender? That is what coach Bill Brock’s group is, and its Air Raid offense has been humming behind QB Ky McClure (927 passing yards, eight TDs), who was a junior-varsity starter last season. With his set of basketball players-turned-pass catchers, he is one pace to challenge Dallas Hagler’s numbers (3,021 yards, 36 TDs) from last year.

About the Falcons: This is easily one of the best stories going in Idaho in 2020. Vallivue is playing with a roster of just 27 players, but is off to its first 3-0 start since 2016. And the Falcons are doing this with a new offensive backfield, led by QB Casey Cope (454 passing yards, five TDs), who was a receiver last season. And RB Santiago Diaz (251 rushing yards, eight TDs) was a JV starter in 2019. DE Braydon Ary is a non-stop disruptor.

Game nugget: These two schools are eight miles apart, which means there is a fair share of crossover. One of them is New Plymouth offensive line coach Blayne Marples, who played for Fruitland in high school.

About the Pilgrims: In the offseason, New Plymouth revamped its offense – from a spread look to a double-wing attack. Why? Coach Dallan Rupp felt it was the best way to keep QB Casey Arritola healthy. His past two seasons have been cut short by injury. It also helped that the Pilgrims returned a good offensive line and a bevy of tailbacks to keep pounding defenses, led by RB Erin Vian (131 rushing yards, TD), an eighth grader.