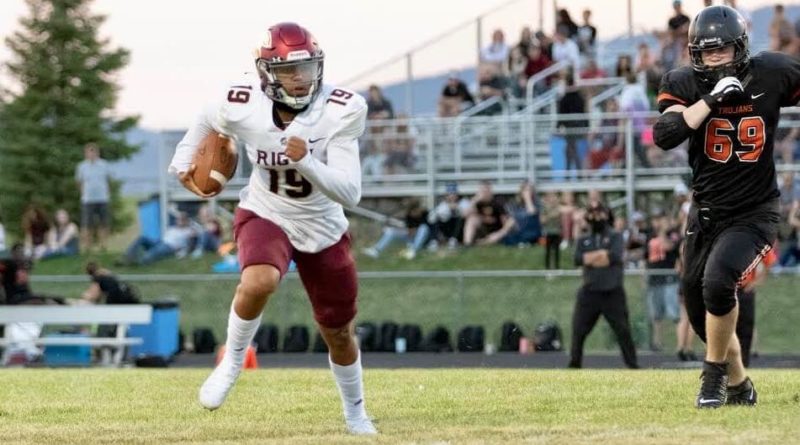 One of the first things Tiger Adolpho was reintroduced to moving back to eastern Idaho was the heat.

“Everything here is so dry,” Adolpho said.

Until it is time to lace up the cleats, and put on the helmet for reigning Class 5A state champion Rigby High School. That heat is a bit more sweltering.

Adolpho is more than the kid with the cool name. He is also a cool-headed transfer quarterback from Hawaii who is learning the Trojans’ multi-faceted offense on the fly. (Feature photo by Heidi Freeman)

So far, so good – Rigby is off to a 3-0 start in defense of its crown. And the 6-foot-2, 195-pound newcomer is making believers out of opponents on a weekly basis.

“I will give him credit, he gets the ball out really fast and throws it with some zip,” said Scott Berger, the coach of the Skyline team that lost to Rigby last week, 47-22.

Last season, senior-led Rigby had an established signal caller in Keegan Thompson, who threw for 289 yards and six touchdowns, and rushed for 122 yards in leading the Trojans to a 57-56 victory over favored Couer d’Alene in the state championship game.

About that same time, Adolpho was involved in his own state championship game in Hawaii. He was the starting quarterback as a sophomore for Kahuki, which lost to in-state powerhouse St. Louis, 45-6, for the open division crown.

You’d think it would be the start of a great run for Adolpho, who won the job for first-year coach Sterling Carvalho. That just didn’t turn out to be the case.

“Me and my friends thought with the (coaching) change that we’d switch up our offense,” Adolpho said. “But they went back to a run-game offense.

“Once we lost the state championship, I was annoyed. We tried to run the ball, but (St. Louis) was more physical than us. When we tried to pass the ball, we did not know what was going on.”

So, the day after the state championship game, Adolpho and his family said farewell to Hawaii, and hello – again – to Idaho.

His path to the mainland – and the Northwest – is strikingly similar to that of another Hawaii product named Kobe Muasau.

Muasau was also a sophomore in 2018, playing in the state title game for Punahou School against St. Louis. After the season, he left and transferred to a state championship program in Washington – Class 3A winner Eastside Catholic.

How did Muasau’s story conclude? As a junior, he led the Crusaders to another 3A title last December.

“I knew who Kobe was because he competed with my cousin for the job (at Punahou),” Adolpho said. “I would also go to camps and see him there.”

Initially, Adolpho and his family moved to Boise where his father, Rick, had a mental-health practice. He enrolled at Mountain View High School.

But “it just didn’t feel right,” so after the school year ended, the family was in search of a new home.

Rick Adolpho had contacts in the eastern part of the state: For starters, he was a center on the BYU-Idaho (formerly Ricks College) football team in the 1990s. And he lived in the town of Ammon in Bonneville County until the family moved back to Hawaii in 2014.

He was also longtime friends with the Togiai family, which lived in Rigby (and where Tanoa played football until signing with Utah last December).

So, the Adolphos relocated to Rigby last summer. And in a few weeks time, Tiger won the quarterback job.

What has been Tiger Adolpho’s biggest challenge at the helm of the Trojans’ offense? Integrating himself into a complex system.

“It is the language where we have multiple four- and five-word calls,” Rigby football coach Armando Gonzalez said. “If you do not know what the base is, it is hard to add other things.”

All parties admit that this will be a season-long process getting Adolpho fully acclimated to the Trojans’ playbook. But week by week, he seems to grasp a little more of what offensive coordinator Aaron Flowers is asking.

“He is coming along,” Gonzalez said.

In three weeks, Adolpho has been surprisingly efficient as a passer – given he was rarely asked to put the football in the air at Kahuku.

Adolpho has completed 29 of 48 passes for 661 yards and five touchdowns. He has also added 119 rushing yards and three scores.

“This first month, I felt like all my skills and IQ had gone out the window learning (the playbook),” Adolpho said. “But once you spend time learning, and watching film as much as they do here, it all makes sense – it makes you make clear decisions.”