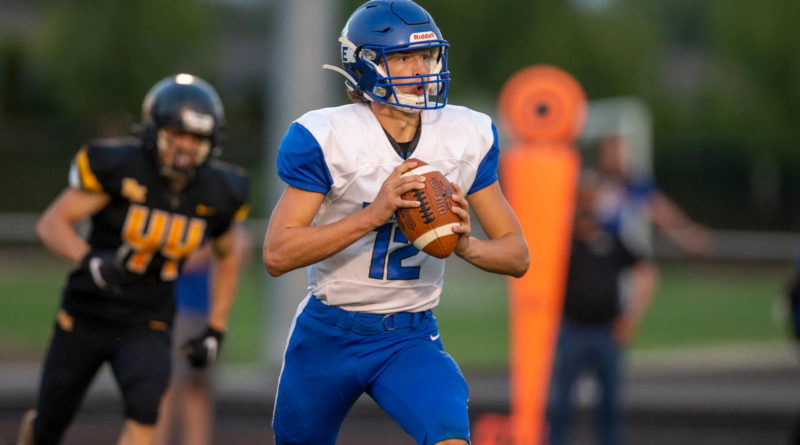 Ben Ford showed why he’s so well-regarded, Ky McClure had a career-type outing and there were many more standout performances in Week 3 of the Idaho high school football season. (Lead photo by Brian Losness, Nitrophoto Motorsports)

Here are the top performances that caught our attention across the state. Tag us on Twitter or Instagram @SBLiveID if we missed anyone. Names are in alphabetical order.

RECAPS: 5 games you should not have missed in Week 3
SBLIVE POWER 10: How Idaho’s 10 best football teams fared in Week 3

Logged three touchdowns in the first half of a 41-14 win over Ridgevue, accounting for 319 total yards.

His quarterback was airing it out and he took advantage. Cowdery caught seven passes for 164 yards and a touchdown.

The state’s most dangerous linebacker corps each returned fumbles for touchdown in the Vikings’ 48-7 win over Lakeland. (PHOTO GALLERY)

Accounted for three touchdowns in the Grizzlies’ blowout win over Centennial: an 81-yard kick return, a 65-yard run and an 8-yard pass. (via The Idaho Statesman)

He threw for four touchdowns. Accrued 446 passing yards. And his Mustangs throttled No. 6 Mountain View because of it. (READ MORE)

Logged four total touchdowns — three through the air and one on the ground (197 total yards of offense) — to lead the defending 3A champs over defending Wyoming state champ Star Valley. (READ MORE)

Posted 220 yards through the air and picked up 84 on the ground and two touchdowns in a loss to Ririe, per magicvalley.com.

Ran for 140 yards and four touchdowns in Hillcrest’s 42-28 win over Madison.

Logged 276 yards on the ground and four touchdowns in a 54-14 Whitepine League win over Clearwater Valley.

Lewiston tried to take away Post Falls’ big-gain slot receiver’s home run looks, so he made them pay on short gains, catching 11 balls for 75 yards, a touchdown run and an interception on defense. (READ MORE)

Logged 125 yards and two touchdowns in a win over Parma.

The sophomore from Colton has Genesee out to a hot 3-0 start coming off of a win over Potlach to secure its first league win in more than a year and surpass its win total last season. Jordan had 364 all-purpose yards (264 passing, 100 running) and two touchdowns.

McClure was the headline. But Kincheloe had a productive night, too, throwing for 227 yards and two touchdowns in a 53-28 loss to Homedale.

Rushed for 127 yards and a touchdown in Hillcrest’s 42-28 win over Madison, per the Idaho Falls Post Register.

He’s always a threat on his feet, but Lang had a solid day throwing the ball, passing for 201 yards, running for 93 more with three total touchdowns. (READ MORE)

A head-turning outing. He threw for 457 yards and five touchdowns by completing 23 of his 35 passes.

Completed 20 of 28 passes for 270 yards, four touchdowns in a win over defending 4A champ Kuna.

Threw for 315 yards and four touchdowns on 17 of 21 pass attempts completed.

Led the game in rushing on a night where Melba established its ground game. He finished with 137 yards and a touchdown.

Accounted for 536 total yards in a 50-6 Whitepine League win over Troy, as reported by The Lewiston Tribune.

Tossed for 147 yards and two touchdowns and ran for 163 yards in an upset win over Bishop Kelly. (READ MORE / PHOTO GALLERY)