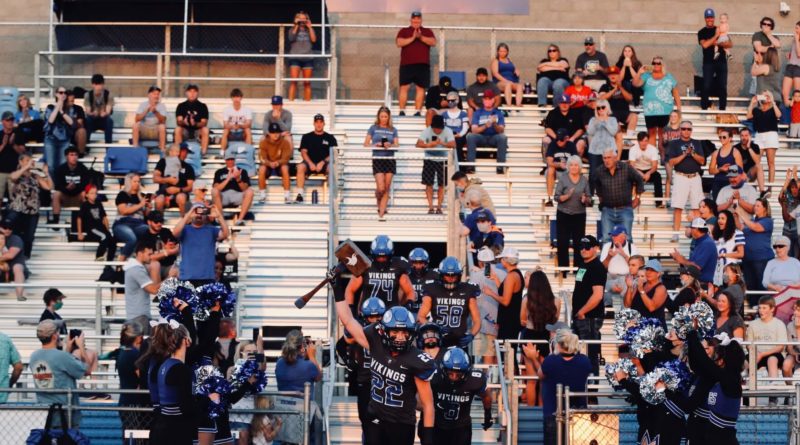 As they were preparing to welcome players back for the fall football season in August, Coeur d’Alene linebackers coach Mike Vargas got a call from head coach Shawn Amos asking for his help.

The longtime head coach had been gifted thick plastic face shields meant to protect medical employees working during COVID-19 from the spread of airborne particles and he needed help answering a burning question.

How can we repurpose these to fit football helmets?

So Amos and Vargas came up with a do-it-yourself plan before the season began that they hoped would make Coeur d’Alene’s football players a little more safe.

Vargas and his fellow coaches got to work, fashioning the face shields atop the helmets. They started cutting the shields to fit, drilled holes for zip ties so the shields could be secured to the helmet’s framework and, voila, the Viking staff found a solution.

And so began the labor of fixing the shields on 160 helmets, which Vargas did with his daughter, Miranda, fellow coordinator Tony Prka and several others over a six-hour stretch on a Sunday in August.

“We just had to trim them and fit into the helmets and some of our coaches sat and did it for hours to get it done,” Amos said.

A heavy dose of teamwork got the job done, and it would not have happened without a donation from a parent.

A parent of a Coeur d’Alene player who works in the medical field had purchased similar face shields in their line of work and thought, why wouldn’t these work on high school helmets? The parent, who Amos did not name because they did not want the recognition, ordered the first batch of them and donated them to the program.

All in all, Amos estimates the team — varsity, JV and freshmen — saved roughly $30 per helmet, which would have rounded out to even more after shipping costs. (Editor’s note: When SBLive checked the prices before publication, a splash shield purchased through Schutt that covers the entire face guard totaled $37.77 after shipping).

“It cost us a few hundred dollars as opposed to thousands,” Vargas said, “and a weekend of my time, coaches time. We just hung out and listened to tunes. We’re brothers anyway, so the more time we spend with each other, the better.”

The No. 1 Vikings return many of their key parts from a team that made a run to the 5A state championship game last year. When they took the field last weekend for their season opener against Sandpoint, which they won 55-0, a closer look would reveal the splash shields, which are hardly visible from afar.

“They held up great,” Vargas said. “Zero repairs Or adjustments where needed.”

Players don’t mind playing with them, either.

“I don’t even notice it to be honest,” Coeur d’Alene quarterback Jack Prka said. “Some guys wear it with a normal visor, and with a lower visor I would think it would fog up, but I don’t think they mind it.”

Vargas figures the team could have asked players to purchase the face shields with their own funds, but the staff didn’t want to place an extra burden on families, especially during a pandemic and considering the heightened prices.

“(Players’ families) donate money, they donate time,” Vargas said. “And not a lot of people are born with a lot of money. And to put an extra burden on somebody, especially if they’re a multi-child family … we don’t want to turn them away.”