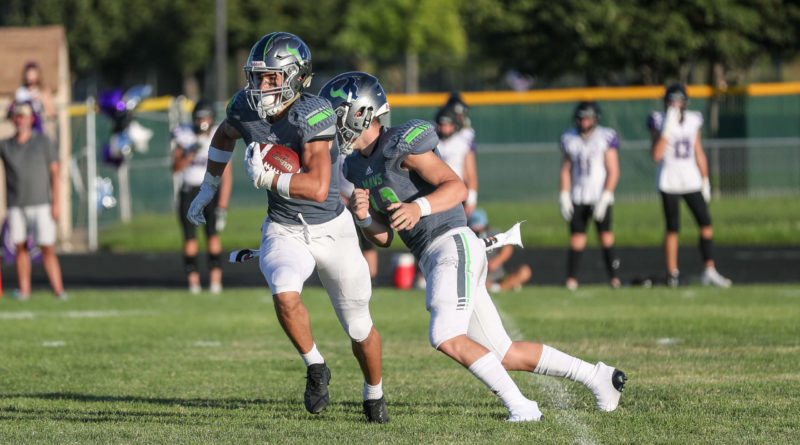 Here is an inside look at the top high school football games across the state of Idaho in Week 3. (Feature photo by Loren Orr)

Game nugget: In 2006, the Mustangs opened a new artificial turf in their football stadium, making them the first Idaho school to play campus home games on a non-grass surface.

About the Mavericks: Yes, they lost the “Battle of the Mountain” axe to Meridian-based rival Rocky Mountain last week. But at least they showed they still should be mentioned as a 5A contending squad after a frantic second-half comeback. QB Jake Farris (220 passing yards, four TDs; 111 rushing yards, TD) worked more effectively in empty-backfield sets, and WR Kayden Chan (11 catches, 173 yards, three TDs) feasted on jump balls.

About the Mustangs: Well, hello and welcome back to football, QB Ben Ford (301 passing yards, three TDs; 100 rushing yards, three TDs in season debut). The dual-sport standout, who suffered a serious knee injury late last season, looked spry in just more than two quarters of work against reigning 4A champion Kuna. Coach John Hartz called it “(Ford’s) most complete game” as his starter. Eagle has lost nine of past 11 games to the Mavericks.

Game nugget: Last week, Post Falls lined up for an absurd 101 offensive snaps (including a few penalties) in the 44-42 loss to reigning 5A champion Rigby.

About the Trojans: It is pretty simple to figure out what this hurry-up offense under coach Blaine Bennett wants to do – wear defenses out with its work rate. QB Jaxon Anderson (466 passing yards, five TDs; 154 rushing yards) and company snaps the ball between an average of seven to 10 seconds after the previous play is done. Good sign that big-play WR Tommy Hauser (19 catches, 251 yards, TD) got untracked against Rigby.

About the Bengals: If Lewiston games became offensive fireworks shows – they are well-equipped to go toe-to-toe behind QB Kash Lang (446 rushing yards, eight TDs; 250 passing yards, three TDs) and RB Cruz Hepburn. Their 87 points in two games ranks No. 2 in 5A behind Rigby (95). And unlike the first week when the Bengals led the entire way in beating Kuna – they had to come from behind in the fourth quarter to clip Lake City last week.

Game nugget: When Armando Gonzalez was hired to lead Rigby in 2017 from California, one of the first coaching friends he made was the guy 15 miles down the road – Skyline’s Scott Berger. They attended the same church together.

About the Grizzlies: If you are wondering if any 4A school can make a dent in the title-chasing hopes of the reigning 5A champions – Skyline might be on the short list. It has two perimeter threats in WRs Connor Maloney (nine catches, 125 yards, two TDs) and Eli Ames (seven catches, 106 yards, four TDs) to stretch out any defense. And Berger’s experienced defense likes to bring disruptive blitzing pressure from all angles.

About the Trojans: Expect QB Tiger Adolpho (430 passing yards, three TDs) to see more bodies charge at him in the upcoming weeks. The Hawaii transplant was a little inconsistent facing Post Falls’ blitzing barrage last week, but did lead the team back from an early two-touchdown deficit. Top-flight WR Trejan Larsen (12 catches, 262 yards, three TDs) should get plenty of looks against Skyline’s not-as-athletic defensive backs.

Game nugget: In his 21st season at Middleton, Bill Brock is the second-longest tenured coach still active at the same 4A school in the state of Idaho behind Bishop Kelly’s Tim Brennan (25th year).

About the Trojans: Well, Homedale had a game against another touted 4A school last week (Bishop Kelly) cancelled Wednesday. So the two-time reigning 3A runners-up should be well-rested to resume pounding defenses in their two-back offense, led by RB Hayden Kincheloe (117 yards, two TDs) and QB Jaxon Dines (128 rushing yards, two TDs; 96 passing yard, TD). Trojans have a 21-game regular-season winning streak going.

About the Vikings: These two schools have not met in 15 years – not since the Vikings posted a 41-0 shutout in 2005. And they are running a much different offense under Brock now – the Air Raid. Not only is QB Ky McClure going to look to take downfield shots to WRs Tyler Medaris and Cash Cowdery (TD last week against Minico), but he is also a threat on designed runs. Expect more pass this week against an untested Homedale secondary.

Game nugget: The Tigers will see North Fremont fairly regularly in the 2A ranks – but South Fremont plays in another town 15 miles down the road. The last time these two schools met was 2007 – a 14-13 Aberdeen victory.

About the Tigers: The one question mark coach Jeff Duffin had about his group was how well his smaller offensive and defensive lines would hold up against more physical fronts. The answer – just fine. Both offensive guards Carlos Medel and Cale Adamson pull hard, and punish at the point of attack for an offense that “runs 90 percent of the time.” And DL Dawson Driscoll has flourished in move from outside linebacker.

About the Cougars: QB Kaimen Peebles (516 passing yards, seven TDs) is engineering South Fremont’s spread attack with surprising efficiency, given that he is just two games into his career as a varsity signal caller. WR Dallin Orme (13 catches, 210 yards, three TDs) is his favorite target. But this will be the best ball-hawking secondary (six interceptions) that Peebles has faced so far, led by FS Raymundo Zamora.