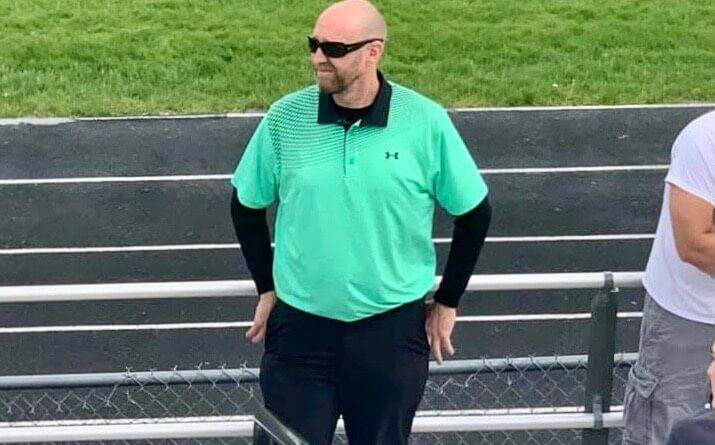 When he was hired as the Highland High School football coach 20 years ago, he began storming the same sideline as one of the state’s all-time greats – offensive guru Jim Koetter (1965-79).

Mariani actually played for Koetter at Idaho State, and directly followed his son, Brent, in the head Highland football position.

“Blackfoot hit a home run hiring him,” said Mariani, who had Ackley on his staff at Pocatello High School in the late-1990s. “He runs one of the most sophisticated spread offenses you will see in Idaho.”

Blackfoot, ranked No. 2 in 4A, is off to a 2-0 start under Ackley. The Broncos host highly-ranked 3A program Skyline on Friday night.

Ackley, 47, has been on one heck of a coaching journey, with a job in college (video coordinator at Idaho State) and three stops in high school (Idaho, Florida, Texas) before returning to his home state.

“A situation like Blackfoot was what I was looking for,” Ackley said. “I like the idea of it being a one-school town where little kids dream about becoming the next great Bronco.”

Right out of college at Idaho State, Ackley was hired to lead a struggling Soda Springs program in 2001. Within two years, the Cardinals were posting winning seasons and reaching the postseason.

But Ackley wanted to jump into the college game. To do so, some of his coaching friends at Idaho State and Boise State suggested he start by being around a better brand of football.

So, Ackley packed up his young family and drove 2,500 miles to take an assistant-coaching position at Lely High School in Florida.

Ackley returned to Idaho – albeit briefly – as one of then-Idaho State coach John Zamberlin’s support-staff members in 2008.

“It just wasn’t the right timing (getting on a college staff),” Ackley said. “It was maybe too late to have a GA (graduate assistant) type of job. I was 32.”

So, he took another dip into the high school coaching pond, this time hired to reignite one of the better programs historically in Florida – Immokalee High School.

Immokalee is where NFL Hall-of-Fame running back Edgerrin James hails from.

“It is an agricultural town known for its tomatoes and watermelon – and was featured on a Bernie Sanders commercial,” Ackley said. “The student body was 98 percent minority – and many of the kids were on free or reduced lunch.”

But Immokalee loves its football – and Ackley brought along an exciting, and winning brand. The Indians won three consecutive district championships, and advanced to the state playoffs in each of those seasons.

In 2012, the Ackley-guided squad reached the Class 5A state championship game, losing on the final play to Tallahassee-Godby, 21-20.

Four players on that 2012 team – cornerbacks McKensie Alexander (Bengals) and J.C. Jackson (Patriots); running back D’Ernest Johnson (Browns); and defensive lineman Deadrin Senat (Falcons) – went on to make it to the NFL.

But at the same time, Ackley clashed with a few community members. He also felt his family was in danger. Just weeks after that 5A championship game appearance, he resigned from his coaching position.

“Just stepped away,” he said, choosing not to elaborate on the events that led to his resignation.

The Ackleys then moved to Texas where he coached an eighth-grade team, then was the wide receivers coach for a Cedar Park High School team that captured the UIL Class 5A Division II state championship in 2015.

After that, he left from the game for a few years to focus on his family – that is until he wanted to return to Idaho, and saw that the Blackfoot job was open.

“My wife knew I was champing at the bit. I was looking at jobs in Texas but I saw the Blackfoot job was open,” Ackley said. “I just felt that was a place I could establish my identity again … and my passion for the game.”

At Blackfoot, Ackley runs an uptempo spread attack, but with one twist – a physical rushing attack. And he has the ideal weapon for that in all-state tailback Teegan Thomas.

“The transition has been better than I would have imagined,” Ackley said. “The cultural buy-in from the team was almost instantaneous. And after Buck built the foundation here, I think they were ready, too, for the next idea in football.”

Those ideas, Mariani says, will make him a big-time winner at Blackfoot.

“He has a great football mind,” Mariani said. “And he knows how to motivate kids.”