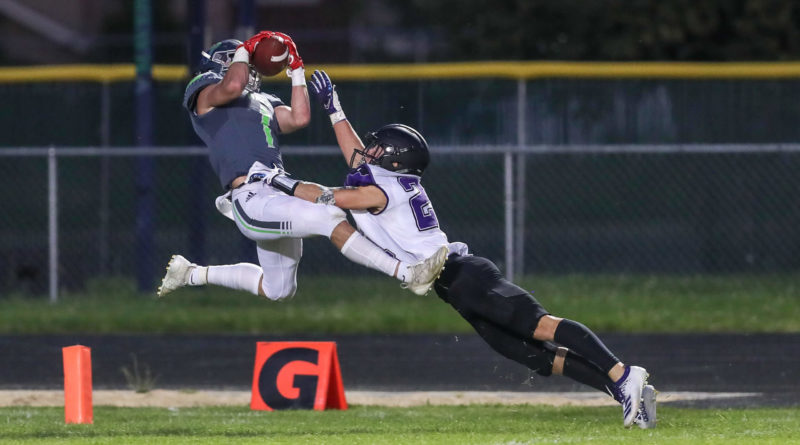 Here is an inside look at the top high school football games across the state of Idaho in Week 2.

Editor’s note: This preview published before the Bishop Kelly-Homedale game was cancelled Wednesday afternoon because of COVID-19 concerns. It has been replaced by Sugar-Salem at Shelley.

Game nugget: This “Battle of the Mountains” rivalry game was in serious doubt because of COVID-19 concerns until Tuesday when the West Ada School District approved the start of fall sports.

About the Grizzlies: It’s been a fun past two games in this series for Rocky Mountain, which upended the Mavericks (16-6) when they were the preseason No. 1 team to start 2018, then handled them when it was defending 5A champion a year ago (27-7). All-purpose RB Jordan Erickson will have luxury of running behind mobile set of blockers, and can take advantage of young Mountain View defense in a variety of ways.

About the Mavericks: If underdog Mountain View wants to keep the rivalry axe in its trophy case, the offense must find a way to produce more than it has in the past two meetings. In 2018, the Mavericks totaled 208 yards (and six points) – and 279 yards (and seven points) last season. The QB Jake Farris-to-WR Kayden Chan combination must net downfield dividends, and RB Leyton Smithson has elite speed to burn in space.

Game nugget: Because of the coronavirus-impacted schedule shake-up, these two 5A Inland Empire foes play twice in 2020. The first game is more of a tone-setter than anything because it does not count in the league standings.

About the Bengals: Over the past seven seasons, the closest result in this game was last year – a 52-28 Lake City victory that snapped Lewiston’s four-game winning streak in the series. The Bengals would like to start another one Friday in the second of back-to-back road games, and have two marvelous backfield athletes running the show in QB Kash Long (363 total yards, four TDs vs. Kuna) and RB Cruz Hepburn, a UW baseball commit.

About the Timberwolves: Lake City won its season opener for the first time since 2014. What is the significance of that? That is also the last year the Timberwolves went to the 5A playoffs. Third-year QB Chris Irvin (296 passing yards, two TDs vs. Lakeland) continues to show a firm command of the spread attack. RB Uriah Chavez and WR Matthew Whitcomb are also key contributors in an experienced set of skill-position players.

Game nugget: As ex-quarterbacks, both coaches – Rigby’s Armando Gonzalez and Post Falls’ Blaine Bennett – have college backgrounds. Gonzalez was an offensive assistant at Cal State Northridge while Bennett was the man in charge at Western Oregon and Central Washington University.

About the Rigby Trojans: All offseason, Gonzalez thought his defending 5A champions had a chance to reload and be formidable. And after showing very few “mental busts” in a season-opening win over Box Elder, he is even more confident about this group. New QB Tiger Adolpho (9-of-10, 220 passing yards, TD) was efficient in his debut, and the Hawaii native figures to be more of a running threat as the season progresses.

Game nugget: When Bishop Kelly fielded a football team for the first time in 1964, guess who its first football opponent was? It was Homedale – and the Knights prevailed, 26-0.

About the Knights: It has been a long time since Bishop Kelly met an Idaho opponent in a lower classification. But with all the coronavirus-related cancellations, these two traditional powerhouses decided to play. Expect active defensive front, led by all-4A SIC pass rusher Manu Lete and defensive tackle Duncan Smith, to really try and disrupt Homedale’s run game. Then watch as do-everything QB Keegan Croteau makes magic.

About the Trojans: While more than a few 3A coaches thought the two-time defending state runners-up would fall bak a notch in 2020 – not so fast. Their two-back rushing attack, led by QB Jaxon Dines (128 yards two TDs) and RB Hayden Kincheloe (117 yards, two TDs), fared just fine in season-opening win over 4A top-10 program Emmett. Dines will also try and cash in on a few big deep-pass plays, and has the arm to deliver them.

Game nugget: This is all about the nickname of the hosts, which could be an apple or a potato. After careful research of the school mascot, Shelley prefers the large potato to terrorize other teams.

About the Diggers: Who says you can’t have a nail-biter in late August? The Diggers did, holding off 4A Century, 13-7, in overtime behind a swarming defense, led by FS Brigham Lee. QB Kyzon Garner (78 yards passing, 34 yards rushing) will see better days as the rushing offense was held to just 157 yards on 52 attempts. It did not help that do-everything WR Crew Clark (who was offered a scholarship by Montana Tech this week) left the game with an injury.

About the Russets: It wasn’t that long ago – 2017 – when Shelley was a big factor on the state level. That came in 3A. After that season, it moved up to 4A, and has won a combined two games in two seasons. But now after getting coach Josh Wells his first win, the Russets play the two-time defending state championships – an opponent they have had great success against. Before a 40-0 loss last season, they had won seven of the past eight meetings. Shelley might have found something in first-year QB Treyce Jensen, a converted wide receiver.

Game nugget: Declo has won seven of the past nine meetings, and is on a three-game winning streak against the Tigers – with the last victory (21-6) coming last season.

About the Hornets: Oh, that three-pronged Matthews attack is going to be a handful all season long. And QB Gabe Matthews (164 rushing yards, TD; 70-yard interception return for a score) was especially impressive last week after missing all of junior season with a serious elbow injury that required Tommy John surgery. Declo will always be run-first in its shot gun Wing-T attack, but Matthews’ passing role will start to expand.

About the Tigers: There is power running – and then there is Aberdeen’s pummel-you-at-the-point-of-attack double-wing run game. In fact, coach Jeff Duffin will pull as many as three blockers to one spot to try and spring QB Leiv Mack and a host of running backs (Carlos Serna, Connor Johnson) on big-chunk plays. The Tigers aren’t set up to win many high-scoring shootouts, but know how to wear defenses out.