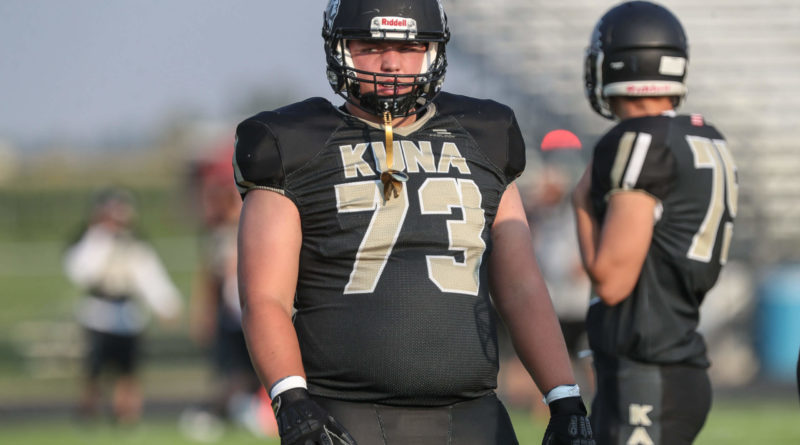 To kick off the season, SBLive is previewing the top players at each position group. Here’s an inside look at the top offensive linemen in Idaho high school football. The list is in alphabetical order.

Another key piece of the run-happy O-line at Vallivue returns. Bolton was a first team all-conference selection.

Vallivue led all of 4A in rushing yards last season. Credit a strong O-line anchored by Conlon, a first team 4A all-state selection.

Eagle’s lineup has impressive athletes at the skill positions. Diffey is an imposing and agile presence down in the trenches.

He’s a terrific tight end. But watch out – Fleischmann packed on 40 pounds and is playing left tackle.

The 5A all-state selection holds an Idaho State offer and at left guard will help make way for dynamic running back Kaleb Demuzio.

Kuna’s electric offense was a driving force behind its 4A state title last year, in no small part thanks to the first team 4A all-state selection’s ability to clear space. (Jacob Graves feature photo by Loren Orr)

He’s a two-way stud (first team 3A all-state on offense, second team all-state defense) who really excels at right tackle. If he were 6-5, Fruitland coach Ryan Tracy says, he’d have every school after him. That speaks to Jeffries’ football IQ, and how he moves.

He’s playing with confidence and even with his staggering size, what stands out about Kohal is how much room the second team 5A all-state selection has to improve.

A key to Emmett’s success will be the run game, its catalyst being Westyn Smith. Lugo, a second team all-4A SIC choice, will be a key to that at guard.

Paved the way for an electric offense en route to a 5A state championship.

Uber-versatile quarterback Ben Ford has big bodies paving the way for him up front, including McDonald, who has College of Idaho, Linfield and others after him.

An absolute force in the trenches, Morgan could be the best lineman in the 8-man ranks — on both sides of the ball. Helped Kendrick reach the 1A-DII state semifinals in 2019.

First team all-state and all-Southern Idaho Conference selection. Blocked for standout quarterback Austin Bolt, who graduated. He’ll have running back Tyler Pimmasone and others to clear the way for in 2020.

The second team 4A all-state selection from a year ago returns to a Nampa group that lost a lot of playmakers. The Bulldogs will turn to leaders like Niupalau to follow up its 8-4 season.

A second team 3A all-state and first team all-SCIC selection.

A mobile strong-side tackle who brings the lumber. Seals the wall within Timberlake’s wing-T.

One of four starters who return on New Plymouth’s O-line, and Williams’ upside may be the highest. Stepped in as a freshman and more than held his own.