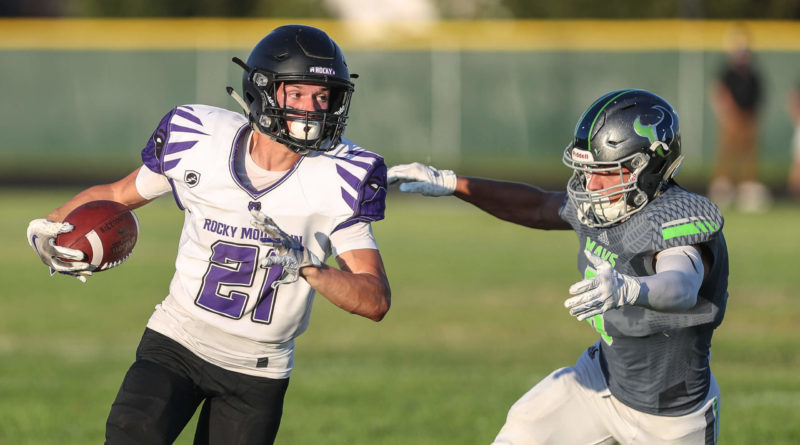 The feel of a bulky 70-pound axe never felt so good.

And in the heat of the annual “Battle of the Mountains” rivalry game, second-ranked Rocky Mountain certainly earned the right to hoist the big prize.

Staving off a late Mountain View rally, the Grizzlies survived a 39-36 road thriller over the No. 5 Mavericks. It was their third consecutive victory in the Meridian-based series.

For the better part of a half, this game followed the script of the previous two meetings – two Grizzlies’ wins dominated by defense and timely big plays.

And after Jordan Erickson returned the second-half kickoff 95 yards for a touchdown to give Rocky Mountain a 24-0 lead, the visitors seemed to be in full control.

But not so fast, because the Mavericks went to an empty set and let quarterback Jake Farris for much of the final 20 minutes.

He connected with wide receiver Kayden Chan for three second-half touchdowns – the last coming on a 35-yard pass that sliced Rocky Mountain’s lead to 39-36 with three minutes remaining.

“We did not match up well with (Chan),” Culig said.

The Mountain View defense forced a Grizzlies’ punt, but Farris could not move his offense out of its own territory – and was stopped on fourth down with 90 seconds to go.

Afterward, excitement brewed on the Rocky Mountain sideline. The axe was presented to athletic director Troy Rice so it could stay with the Grizzlies for another year.

“It feels pretty good to keep it,” Culig said.

Cruz Hepburn carried a 15-yard sweep down the left sideline for a touchdown with 33 seconds left and 10th-ranked Lewiston held on to beat host Lake City in a shootout on Friday night.

Bengals quarterback Kash Lang rushed for five touchdowns, including back-to-back 58 yard TD runs in the late first and early second quarters, to help Lewiston open the season 2-0 on the road. Hepburn had three total touchdown runs, including two in the fourth.

“Kash Lang is unbelievably good,” Lewiston coach Matt Pancheri said. “He was just fantastic. He runs the ball so dang hard. Reads the offense. And is just really positive. The kids love him. He plays so hard. I couldn’t ask more of that kid.”

LC quarterback Chris Irvin connected on back-to-back touchdown passes to tie the game at 42-42 early in the fourth. The Bengals led by as many as two possessions in the second quarter, but both offenses were firing on all cylinders — and neither team could stop one another.

Lewiston (2-0) allowed a tying touchdown with 2:27 left, which set up Hepburn’s go-ahead run. Lake City got the ball back with 33 seconds, but the Bengals defense held firm.

Irvin, who led the Timberwolves (1-1) to a week one win over cross-town Lakeland, threw for more than 300 yards, highlighted by his 70-yard TD pass on 4th and 2 to even the score with 10:25 left in the fourth quarter.

“That kid sure did a good job with the ball,” Pancheri said. “We hoped we’d get a little better pressure on him, but they did a really good job of picking up our guys. You’d like to play better defensively than that, but it is what it is. Hopefully we’ll get better next week.”

On paper, it seemed like an overwhelming challenge – a Vallivue defense with seven new starters against a physical Hillcrest rushing attack, led by all-state candidate Tre Kofe.

Youth won out. And the Falcons are now 2-0 with a shocking victory at the third-ranked Knights.

“We had a good week of practice. We knew Hillcrest would get into that tight formation and bring it at us,” Vallivue coach Layne Coffin said. “The kids hung in there and played tough, and kept their technique intact.”

The Falcons’ biggest drive came midway through the fourth quarter. They converted a fourth down on Casey Cope’s pass to Camryn Dean – and that eventually set up Cope’s 1-yard quarterback sneak that gave Vallivue a 28-14 lead with 7:33 to go.

“I am old, and I believe in culture. It is a big thing,” Coffin said. “In the last two to three years, the kids changed the whole way things are done here.”

Tyler Richins, coach of the two-time defending Class 3A champions, know his team will get everyone’s best shot.

And did Friday night from an old league rival.

Again, the Diggers’ defense rose to the challenge by now allowing a touchdown – and just one score in its first two games.

“Our defense did a phenomenal job,” Richins said “We are a young team. We only start three or four seniors, so we have a lot of young players. But we are learning every day.”

Senior Logan Cutler extended the top-ranked Diggers’ lead to 14-6 on his 4-yard scamper right before halftime.

And late in the third quarter, Sugar-Salem scored again – this time on Kyzon Garner’s 4-yard touchdown strike to Brigham Lee.

The Tigers forced five turnovers, including picking off Gabe Matthews three times, and sixth-ranked Aberdeen snapped a three-game losing streak to the No. 7 Hornets.

Declo erased an 8-0 deficit with two third-quarter touchdowns – the last one coming on Matthews’ 8-yard touchdown pass to Derek Matthews with seven minutes to go.

But Aberdeen answered as Leiv Mack’s 40-yard completion to Connor Johnson set up Carlos Serna’s short go-ahead touchdown run (16-12) with less than two minutes to go in the quarter.

After that, it was the Tigers’ secondary that got the best of Gabe Matthews. Jordan Villegas, Raymundo Zamora and Serna each had interceptions.

“I was very proud of how poised our team stayed when things went against us early in the third quarter,” Aberdeen coach Jeff Duffin said.

Matthews did finish with 144 rushing yards and a touchdown, and threw for 163 yards and a score in a losing effort.