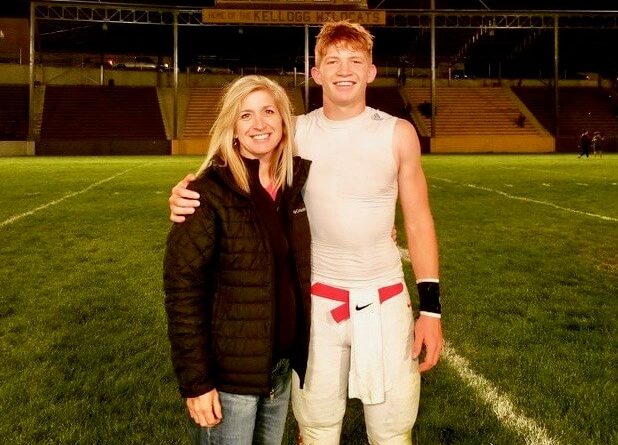 Ten-time Idaho high school championship football coach Tom Harrison has seen the best quarterbacks the state has produced for nearly four decades – and would put the teenager leading his own Weiser High School huddle up against any of them.

His name is Brett Spencer. And his game is winning.

“You don’t have to tell or show this kid anything,” Harrison said. “If he makes a bad decision, that is what it takes – making a mistake for him not do it again.”

Spencer, a junior, has a hectic weekend ahead of him.

First, he will lead the 3A’s fourth-ranked Wolverines into a non-conference battle Friday night against Emmett, which is No. 8 in 4A.

After the game, Spencer and his parents will hop in the car and drive all night from Boise to Gig Harbor, Washington – a 520-mile trip – so he can compete in the two-day “Northwest 9 Showcase” finals involving the top quarterbacks from Washington, Oregon and Idaho.

“It is kind of a brutal turnaround,” Spencer said. “I will just fall asleep.”

And when he wakes up, he will see 19 other underclassmen ready to go through three combine-type workouts that will highlight footwork, throwing mechanics, running speed, arm strength and passing accuracy – all put on by former University of Washington quarterback and Northwest 9 founder Taylor Barton.

If he makes the cut of nine finalists, he will perform one last workout before a “Northwest 9” champion is crowned.

“If I do well, it helps guys in Idaho (get recognition),” Spencer said. “There are a lot of dudes here who deserve the attention.”

Spencer admits he knows very few of the other big-name quarterbacks in the Northwest, including Washington high school standout Sam Huard (Kennedy Catholic), the nation’s top pro-style quarterback in the class of 2021 (who is part of the 40-player senior quarterback NW9 competition).

But that won’t matter much once the showcase is underway.

“I am a really competitive guy – sometimes a little too much. Coach (Harrison) tells me, ‘You don’t have to be tackled by 10 guys on every play,'” Spencer said. “So once the competition starts, I will be fired up. And after everything is over, I know I will be pretty tired.”

Last week, Spencer led Weiser to a season-opening 40-7 victory over Buhl. He threw three touchdown passes, and ran for another score.

And one of Spencer’s touchdown passes was to Brock Spencer, his younger brother making his varsity debut as a ninth grader.

It came on a play that Brett Spencer said originally was a designed run play. But he told Harrison that he thought he could get something bigger on a fade pattern to his brother, who was operating against single-man coverage.

“I trained with my brother all last summer, and he caught a couple thousands balls from me,” Spencer said.

“Coach (Harrison) said, ‘Go for it!’ – and it worked. It was really cool. My dad (Anthony) was the sideline with us, and he was hyped up. It was something we’ll cherish for a long time.”

A dual threat, Spencer said he is a passer first – and “not a running back that can throw.”

“Kind of like (Seattle Seahawks quarterback) Russell Wilson,” Spencer said. “He is not a big, tall guy – and I am not, either. But we make plays.”