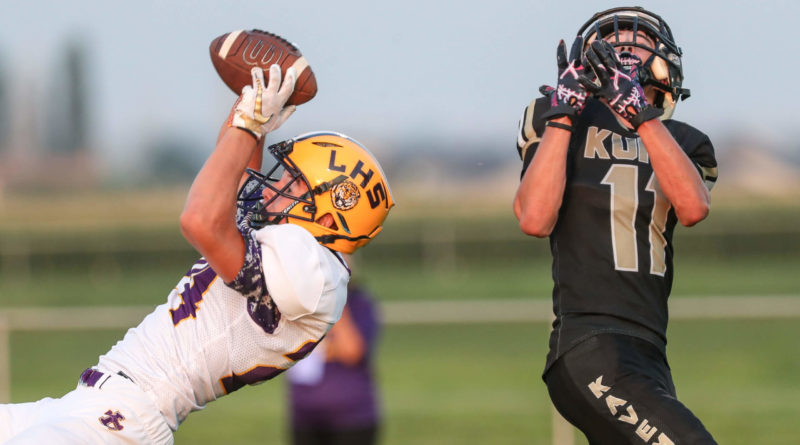 His team had just missed on a two-point conversion run early in overtime, and then the two-time defending Class 3A state championships had to hold a bigger and equally-physical Century offense out of the end zone to avoid a season-opening non-league loss.

The Diggers’ defense did its job – and quickly.

Brigha Lee and Jonah Schulthies converged on running back Zac Snow at the same time to dislodge the football, and Jerek Rammell recovered the fumble to preserve Sugar-Salem’s 13-7 victory at Digger Stadium.

Sugar-Salem is ranked No. 1 in SBLive Idaho’s preseason 3A poll; the Diamondbacks are No. 6 in 4A.

“Man, what a great win to start the season,” Richins said.

That is not to say he did not sweat it out.

But because do-everything wide receiver Crew Clark left in the first half because of an undisclosed injury, the Diggers were left without a kicker. So they had to go for a conversion run, and were stopped.

“You then start wondering, ‘What is going to happen?'” Richins said.

Richins moved Lee from linebacker to safety in the offseason, and that move paid off. He was the speeding missile that started the game-saving defensive stand.

“It was a gutsy play by him,” Richins said. “But he did that for us all last year.”

Both offenses were held in check: Sugar-Salem gained 235 yards on 69 plays, and Century totaled 169 yards on 48 plays.

The reigning 4A champions were rudely welcomed back to 5A with a home loss to the Bengals.

Quarterback Kash Lang passed for 189 yards, ran for another 164 yards and totaled four touchdowns in leading Lewiston to a non-league victory.

Cruz Hepburn’s 86-yard kickoff return for a touchdown was the big blow, giving the Bengals a 37-24 lead with 9:57 remaining.

Montana State commit Sean Austin had a huge home opener for the Kavemen by passing for 413 yards and three touchdowns. All three scorers went to Koltin Teater – the last on a 27-yard strike with 2:58 to go to cut it to 37-30.

Sandpoint narrowed the margin to a touchdown —21-14 — in the third quarter when Tag Benefield blocked a field goal attempt by Post Falls and took it to the house. Post Falls’ final touchdown came off of an interception that set up a short yardage run.

Both quarterbacks were new to the position. Post Falls’ Jaxon Anderson, who threw a seven-yard touchdown pass to Joshua Shields in the second quarter, was a safety last year. Sandpoint’s Gerrit Cox, a junior running back, started under center for the Bulldogs.

The game was hosted at Sandpoint High School’s brand new turf field with no mask mandate in front of a limited amount of fans, as reported by KXLY. 650 tickets were sold. Post falls has now won 15 of the last 16 matchups, including the last five.

This might be a Grizzlies defense that is a handful for a lot of 4A teams this season.

Fifth-ranked Skyline blew open a close game with a pair of touchdowns in the first four minutes of the second half, and won in its first trip to Rupert since 2003.

“We are going into the season with a lot of experience on defense, and it really helps to have that,” Grizzlies coach Scott Berger said.

Up 6-0 to start the second half, Skyline held the No. 7 Spartans on a three-and-out, and quickly scored.

Next time Minico had the ball, again it was forced to punt. This time the snap went awry, and Connor Maloney recovered it in the end zone for a touchdown – and a 20-0 Skyline lead.

Minico was held to minus-2 yards passing in the game.

Ryan Tracy saw the reverse-play trickery, then the chaos – and was just happy it was his player who jumped on the recovery.

After nearly blowing a two-touchdown lead, the Grizzlies’ defense recovered a botched handoff on a Mustangs’ game-tying two-point conversion play with 1:34 remaining.

Melba running back Zane Helm cut it to 36-34 on his 15-yard gallop, capping the Mustangs’ two-touchdown rally in the final 101/2 minutes of the game.