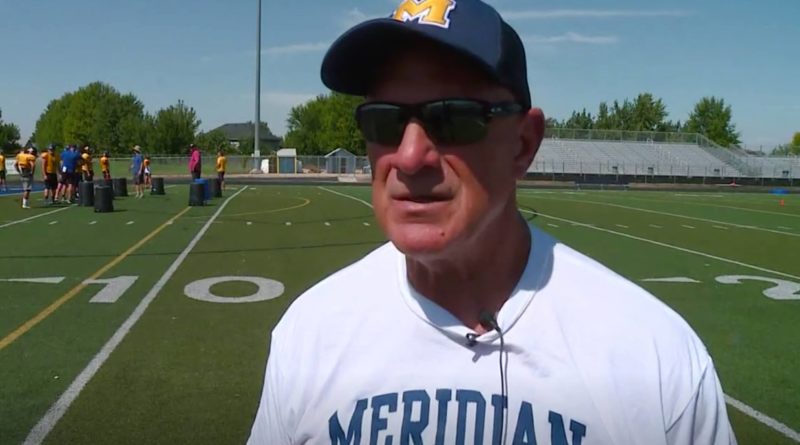 A former college quarterback, Blaine Bennett has long been one of the best passing-game gurus in the region as the director of the All-Northwest Football Passing Academy.

Combined, the two men have 25 years of head-coaching experience in college football. In fact, both directed the Central Washington University program – Zamberlin from 1997-2006, and Bennett succeeding him from 2007 until 2012.

So what are they doing now?

They are coaching Class 5A high school football in Idaho.

Bennett, 56, is entering his fifth season as the coach at Post Falls High School – his second such job in the prep ranks. Zamberlin, 64, is the second-year coach at Meridian High School just outside Boise.

“It is nice to have them around, and you wish nothing but the best for them,” said Tom Harrison, the Weiser High School coach who has won 10 Idaho state high school championships.

Bennett enjoyed great success at two stops in the Great Northwest Athletic Conference, leading both Western Oregon (1995-2000) and CWU to postseason trips and national rankings. In fact, the Wildcats nabbed the No. 1 spot for the first time in school history under Bennett.

After Bennett was dismissed from CWU in 2013, he spent one season as an assistant coach at Eagle High School before landing a job coaching professionally in Austria with the Graz Giants in 2015.

But after one season overseas, Bennett began looking for a job back in the Northwest. He had his teaching credentials from Whitworth (emphasis in math), and saw that three high school coaching positions were open – Eagle, Nampa and Post Falls.

Since his parents lived in Spokane, taking on the Post Falls job made the most practical sense. And Bennett took the reins of the program on an interim basis in the spring of 2016 after former coach Jeff Hinz resigned to battle cancer.

“I never knew if it was going to be the right move – but you just try and make it the right move,” Bennett said. “It was an opportunity for me to get back in the Northwest. The quality of life is excellent. The calendar is excellent. And I’ve been excited working with young people again.”

Post Falls has been in the state playoffs in each of the past three seasons, winning a playoff game in 2018.

“That is something Post Falls has not done on a regular basis,” Bennett said. “It is a growing school – and a growing community.”

This isn’t Bennett’s first foray into the high school ranks. He coached for one season at one of Indiana’s biggest high schools in 2007 – Jefferson High School.

“The biggest difference is in college, you put together the type of team you want. At the high school level, whoever walks through the door – that is what you you have,” Bennett said. “But there are similarities to small college: We have 165 kids and 15 coaches. And getting ready for a first game, you have to get organized and make sure everyone is on task.”

Zamberlin played for the New England Patriots and Kansas City Chiefs. He coached FCS (Idaho State) and NAIA/NCAA Division II (won four GNCA titles at CWU). And in 2012, he went off to the Canadian Football League to be a linebackers coach with the Hamilton Tiger Cats.

In 2015, he moved back to Idaho as one of the West Coast scouts for the Tiger Cats. But when it appeared the organization wanted to transfer him to another region, Zamberlin started looking for jobs in the Boise area – including teaching and coaching high school football.

“It was not something initially I thought I would do – coach in high school,” Zamberlin said.

He joined the Rocky Mountain staff under former coach Scott Criner in 2016, then applied for the head job a year later that Chris Culig got. He stayed on with Culig for another season.

He then jumped to Eagle High School as an assistant coach in 2018 – and applied for two head-coaching openings the following season. He was hired at Meridian.

The Warriors went 3-6 in Zamberlin’s first season. But they did win in his coaching debut – a 21-6 victory over Skyview.

“I remember we ran the ball for 325 yards, and we were a very physical team coming off the ball in that game,” Zamberlin said.

“And to feel the excitement with that school – we had our ‘Warrior Walk’ with the marching band and cheerleaders coming through the middle of the grandstands – I don’t care if it was high school, college or pro football, it got the goose bumps going.”

Zamberlin’s young group is expected to challenge for a playoff spot coming out of the battle-tested 5A SIC Foothills.

“You coach because you love the game and you want to make a difference for these kids,” Zamberlin said. “They want to play and win just as much as the college player does, or pro player does. Football is football … and it is just as rewarding to see one of your high school players execute and have success.”