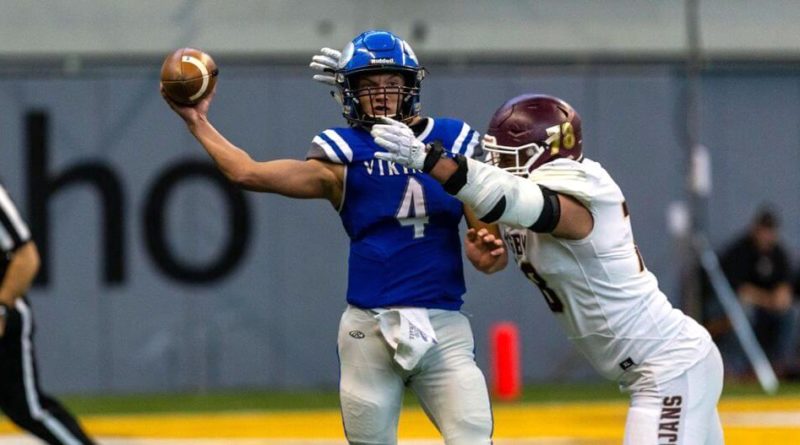 Here’s a preseason look at the Top 10 teams in Class 5A Idaho high school football.

It’s time to scratch the seven-year itch. As much of a state powerhouse as the Vikings have been, their last 5A title came in 2013. But they are loaded, led by QB Jack Prka (3,716 yards, 32 TDs), the state’s leading passer in 2019, and LB Luke McLaughlin, the Inland Empire defensive MVP.

Should the Grizzlies be the favorites? The 2018 state champions have won 22 of their past 23 games, and return a ton of experience on the defensive side of the ball, led by all-state LB Landon Albert, one of four three-year starters. RB Jordan Erickson is a game-breaking all-purpose threat.

This team has plenty of pieces to pursue a 5A title. All-state RB Kaleb Demuzio (1,250 rushing yards) bulls straight ahead with power – and has four returning offensive linemen to open holes. WR Easton Durham moves back to his old position, giving QB Jack Whitmer a chance to shine.

Say this about the Trojans last season – they earned a first state title, beating perennial challengers Rocky Mountain and Coeur d’Alene in the final two games. They will still be a factor – and physical – behind RBs Zhiek Falevai ond Gabe Mobley, and newcomer QB Tiger Adolpho.

It is very much going to be QB Jake Farris’ show in 2020 if the Mavericks want to put together a deep playoff run – especially with only one defensive starter returning. Farris can carry an offense, and will look often to find shifty WR Kayden Chan, also a return threat, for big plays.

Obviously much of the Mustangs’ fate hinges on the health of returning QB Ben Ford (torn ACL), who is one of the state’s top dual-sport athletes. And now that backup Mason McHugh is gone (transferred to Bishop Gorman), it is Ford’s team – helped greatly by RB Jackson Stampfli.

As if the 5A Southern Idaho Conference wasn’t daunting enough – the reigning 4A champions have now moved back up a classification. And the Kavemen still have arguably the top signal caller in the state in QB Sean Austin, a Montana State commit, to help navigate rougher waters.

The Eagles posted their first non-winning season since 2005, but still made the state playoffs. If new QB Max Clark can ably fill the shoes of graduated Carson Bohning, he has plenty of pass-catching talent (WRs Kody Walk, Justus Del Rio and TE Jackson Reed) at his disposal.

This was an offense that pumped out a 3,000-yard passer (Derek Pearse) and 1,000-yard rusher (Eli Gondo) last season, so you know offensive-minded coach Blaine Bennett can get the Trojans to score points. Electrifying WR Tommy Houser is set up to post absurd numbers.

With an ex-NFL linebacker now running the show, expect an emphasis on defense. And coach John Zamberlin’s group, while inexperienced in the front seven, is rangy and athletic and ready to blossom. QB Malakai Martinez, a junior, has job to himself now, and can really fling it.

(Cheryl Nichols / For The Spokesman-Review)