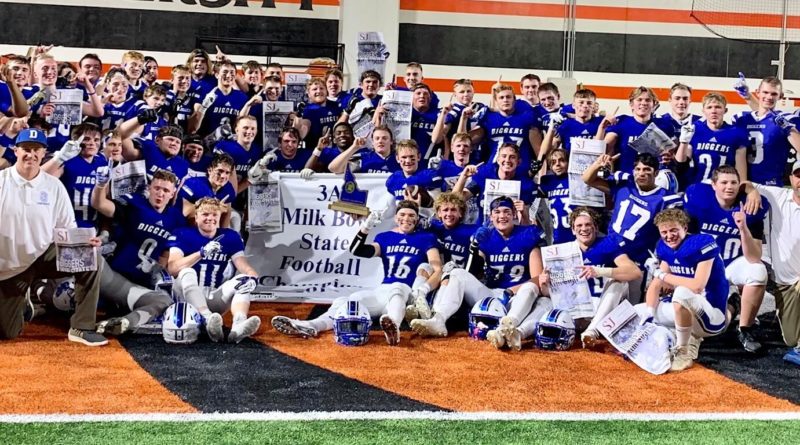 Here’s a preseason look at the Top 10 teams in Class 3A Idaho high school football.

Even though the ground-and-pound, two-time defending 3A champions lost 25 seniors, they are still the team to topple. WR/CB/PR Crew Clark might be the state’s best three-phase threat, and teams with FS Brigham Lee in a loaded secondary. LB Logan Cutler stops all oncomers in the middle.

Don’t forget about the reigning two-time state runner-up, which has met Sugar-Salem in the past two 2A title games. And this fast-paced offense has another signal caller to watch – QB Hayden Kincheloe, who is a bigger threat as a runner. All eight of school’s state titles came in 2A.

Quick, can you name the school with the most 3A titles in Idaho? It is this program – with 10. And you might see a few more looks from the spread formation this season behind QB Cole Gilbert, who has a bevy of talented pass catchers to throw to – especially WR Trey Poulter on the outside.

This team can pile up points in a hurry. But this 2019 state quarterfinalist has to break in a new quarterback for its spread offense to replace EWU signee Shane Jennings. Stocky-built Kurtis Adkinson is the guy, and he has weapons to throw to – especially D1 prospect Colston Loveland (TE/WR).

If there is one thing longtime coach Tom Harrison knows how to do, it is win state titles. He has 10 of them (including eight at Snake River), and believes he has a Wing-T centerpiece to make the Wolverines a factor in QB Brett Spencer, a fast, hard-nosed playmaker. Last 3A title for school came in 1997.

Before Sugar-Salem went on its current run, this was the program that won back-to-back 3A titles. After two down years, expect a rebound, especially behind a good Wing-T offensive line, led by all-state RT Weston Jeffries. That is a good luxury for new QB Luke Barinaga, who is a passer.

It has been 21 years since the Timberwolves won their only title (1999) – but this could be an interesting senior-loaded squad to watch. QB Reid Nelson takes over the offense as a first-time starter, and he will surely look for TE Luke Thompson, whom the team runs the Wing-T behind a lot.

Kelly Amos, who started the program in 1998, returns for a second stint as coach after serving as the defensive coordinator. The 3A semifinalists from 2019 lost a lot (11 of 13 all-3A Intermountain first teamers graduated) but they do have OL Paul Turley back to anchor a good line.

Folks are still waiting for the Bulldogs to make that final breakthrough to a state championship game. And they have some of the best pure speed you’ll see, which is a key ingredient for a no-huddle spread offense. QB Heath Owens and WR Brett Bronson should be an exciting passing combination.

Another program still in search of its first state title, the Cougars also want to spread defenses out and throw the football. After starting at wide receiver last season, QB Kaimen Peebles gets his shot as a junior to run the show, and will certainly target WR Dallin Orme often.