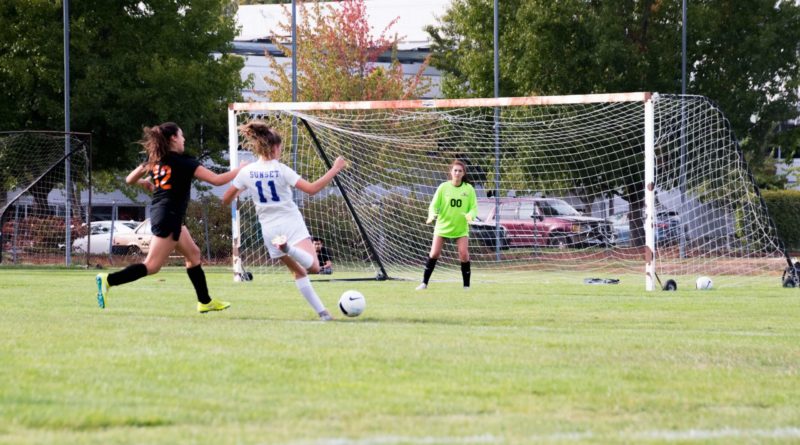 We hope circumstances will allow for high school sports to take place later in the school year. While we wait, we thought it would be fun to name all-state teams this December anyway.

Here are one longtime writer’s picks for an all-returning, all-classifications, all-state team in Oregon high school girls soccer. This all-state team doesn’t take solely into account where a player slots into the recruiting rankings; it combines 2019 performance with 2020-21 projection to determine who might be the best of the best in the state of Oregon next spring. It also doesn’t divide between Class 6A and Class 1A — as you’ll see — but puts everyone into one boat.

The reigning Class 5A player of the year scored 46 goals, tied for fourth all-time in Oregon for a single season, in leading the Wildcats to their third state final and first since 2011. She has committed to Oregon State.

Assuming she is able to come back from a season-ending knee injury suffered in a second-round Class 6A playoff victory, the two-time all-state first-teamer will shoot for her 100th career goal early in her senior season — she has 90 after finishing her junior year with 31.

The Axe advanced to the Class 6A state semifinals for the first time in the past 15 seasons thanks in part to the improvement of their first-team all-state striker, who scored seven goals as a sophomore but erupted for 31 last year.

The University of Portland signee and two-time Class 6A first-team all-state selection helped lead the Timberwolves to the 2019 state quarterfinals with 18 goals.

The three-time first-team all-Southwest selection doesn’t put up big numbers for the Axe, but the University of Utah signee was named ODP Player of the Year in 2018 and twice has been invited to U.S. Soccer training camps.

Overshadowed a bit by the star power surrounding her on the three-time defending Class 6A champion Crusaders, the second-team all-Metro selection and University of Arizona signee had nine goals and 10 assists in 2019.

Topaum, a Class 6A second-team all-state selection last year, scored 21 goals to help the Bruins reach the quarterfinals for the second consecutive season.

The Class 3A/2A/1A player of the year and Colgate signee had 12 goals and 12 assists to help the Eagles reach the state final. She missed the championship game with a foot injury, but Catlin Gabel still was able to dethrone five-time defending champion Oregon Episcopal.

The first-team Class 6A all-state selection anchored a defense that allowed six goals all season and recorded 15 shutouts in earning a third consecutive state championship and a No. 1 national ranking from Top Drawer Soccer and United Soccer Coaches for the second year in a row. She chipped in two goals and four assists.

Carrington, a second-team Class 6A all-state selection and an Oregon State signee, helped anchor a defense that had 11 shutouts as the Mavericks reached the state final in their second season.

Foster was a Class 5A first-team all-state honoree who anchored a Raiders defense that allowed nine goals in 18 matches and posted 11 shutouts en route to a second consecutive state championship.

The Class 3A/2A/1A first-team all-state selection and Carleton College signee anchored a backline that posted 10 shutouts and allowed only eight goals — never more than one in a game — as the Eagles won their first state title since 2010.

The University of Washington signee bided her time behind all-state keeper Mary Votava for two seasons, but with Votava now at Notre Dame, the Crossfire United standout finally gets the starting job full-time.