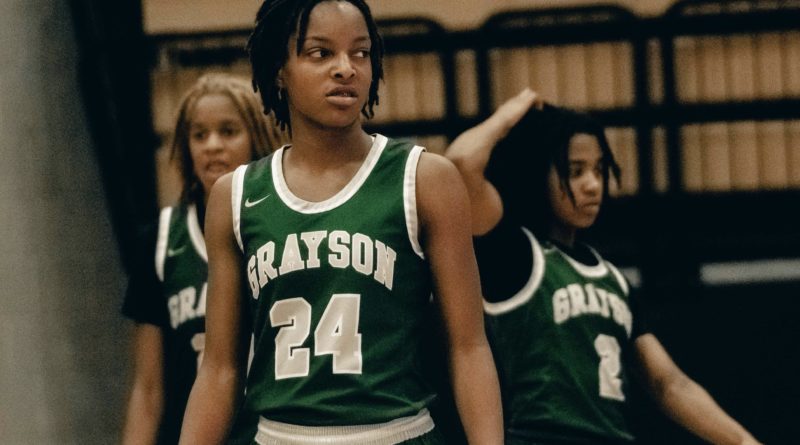 Over the next few weeks, we’ll be taking a position-by-position look at some of the top players in Georgia high school girls basketball.

Our first list focused on the point guards, and now we’ll cover the top shooting guards.

There are hundreds of standout girls basketball players in Georgia, and these lists are not intended to be comprehensive! Use the comments section to discuss the other shooting guards worthy of fans’ attention in 2021-22.

Pictured above is Grayson’s Catherine Alben (photo by Willie Prince).

Akins is a long, athletic guard who gets out in transition and loves the long ball. The 5-foot-9 sophomore averaged almost 16 points per game through the Blue Devils’ first half of the season and has offers from DePaul, Louisville and Miami.

Blazing fast with a quick first step, Alben often blows by defenders and gets to the basket. The 5-foot-7 Charleston Southern signee surpassed 1,000 career points with a 24-point game against Holy Innocents’ in November.

Just a junior, Allen has already reached the 1,000-point mark in her high school career. She can play either guard position, score from anywhere and recently earned MVP honors in leading her team to the McDonald’s Shootout tournament championship.

Bolden glides to the hoop and wastes little time putting up a shot when she catches a pass beyond the arc. The 5-foot-7 senior went for 26 points in the Spartans’ win over Salem on Jan. 4 and joined the 1,000-point club in December.

Recently nominated for the McDonald’s All-American Game, Bowles is one of the top hoopers in the country. The 6-foot-1 Georgia signee has over 2,000 points to her name for the War Eagles and is averaging 25 points, 8.7 rebounds and 4.8 assists per game this season.

On offense, Bretz is a knockdown shooter who can also put her head down and attack the rim, and on defense, she starts fast breaks by picking pockets. The 5-foot-10 Columbus State signee joined the 1,000-point club on Jan. 3.

Cowart is a combo guard with above-average height for her position, giving her an advantage attacking the basket and grabbing rebounds. The 5-foot-10 Tennessee Tech commit has been a mainstay for a talented Wolverines squad currently ranked No. 23 in the state.

Gliatta finds her shots in a halfcourt offense, and she grabs rebounds and goes coast to coast for a bucket. The 5-foot-8 senior has offers from Birmingham Southern, Truett-McConnell and LaGrange.

One of 10 girls from Georgia nominated for the McDonald’s All-American Game, Johnson is an all-around weapon on the hardwood. The 5-foot-10 LSU signee led the Yellow Jackets to an upset win over Kell on Jan. 7 with 40 points and 14 rebounds.

Jones finds her spots (which tend to be behind the 3-point line) and makes her shots at a high percentage. In the Indians’ win over Jefferson, the sophomore scored 18 points, with 15 of them coming off 3s.

When Kinlaw catches a pass and sets her feet before putting up a shot, you can bet it’s going in. The 5-foot-7 Brenau commit is a lock to hit at least a couple of 3-pointers each game for the Dragons.

Little is at her best when she’s in attack mode, which for the confident guard is pretty much all the time. The senior is one of the top scorers in the state, currently averaging 25 points per game.

Martin is a lights-out shooter who is comfortable on or off the ball. The 5-foot-8 junior dropped 20 points in a win over Wesleyan and is averaging over 12 points per game for the Wolverines.

Pearl can’t be left alone past halfcourt or she’s liable to drain a shot at any moment. Even with a defender in her face, the 5-foot-7 freshman is a knockdown shooter, evident by her 31-point (eight 3-pointers) performance in the Knights’ win over Centennial on Jan. 13.

Peterson has a quick release from long range and has no fear letting a shot fly with defenders closing in fast. The junior posted 19 points in the Longhorns’ win over Kennesaw Mountain on Dec. 11.

Porter is a combo guard with a knack for knocking down threes and starting fast breaks with her defense. The sophomore connected on four 3-pointers in the Lions’ win over Sand Rock (Alabama) and had six steals in a win over Tattnall Square.

Preston is a slick guard with vision beyond her years. The 5-foot-6 sophomore is also an elite scorer off the dribble with a smooth mid-range game.

Reeves is a catch-and-shoot machine. The senior helped Holy Innocents’ win the Class A Private state championship in 2020 and is a key piece for the current No. 2 team in the state.

A two-way combo guard, Smith has made an immediate impact for Roswell after moving from the Seattle area before the season. The 5-foot-9 sophomore has scored 30-plus points in three consecutive games for the Hornets (10-5).

Williams is a combo guard who, along with being a lockdown defender, is money from beyond the arc and can weave through defenses to avoid contact near the rim. The 5-foot-9 senior makes for a killer one-two punch in the Broncos’ backcourt along with Georgia commit Diana Collins.