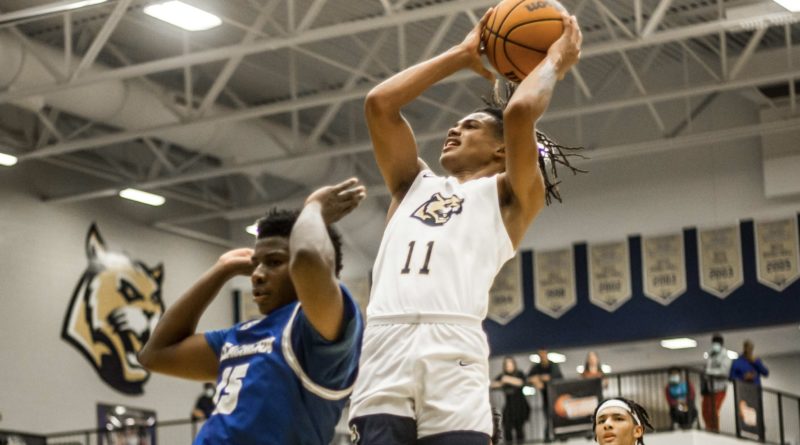 Over the next few weeks, we’ll be taking a position-by-position look at some of the top players in Georgia high school boys basketball.

Our first list focused on the point guards, and now we’ll take a look at the shooting guards.

There are hundreds of standout boys basketball players in Georgia, and these lists are not intended to be comprehensive! Use the comments section to discuss the other shooting guards worthy of fans’ attention in 2021-22.

Pictured above is Wheeler’s Kyle Burns (photo by Willie Prince).

Put simply, Anderson is a scoring machine. The 5-foot-8 sophomore averages 27.5 points per game, fifth-most in the state among players with at least 10 outings. He committed to Michigan last summer.

One of the top uncommitted seniors in the state, Arrington continues to boost his college stock. The 6-foot-3 senior posted an epic 40-point triple-double in the Scots’ win over Towers on Jan. 7 and averages 25.8 points and 12.3 rebounds per game.

Bell stands out with his leaping abilities, but he’s an all-around talent on the court. The 6-foot-3 senior originally from Grovetown scored 21 points in TD Prep’s win over Dream City Christian (Arizona) on Dec. 31.

The 6-foot-2 scoring guard moves well off the ball but can play either guard position. Only a sophomore, he has scored 40-plus points multiple times this season and has seen his recruitment pick up with recent offers from Xavier and Vanderbilt.

A natural scorer who has a deep bag of moves to create space off the dribble, Brown is a key piece for a deep Falcons squad. The 6-foot-1 senior picked up an offer from Alabama State in December.

The 6-foot-4 junior has some serious bounce and is one of several weapons for a Newton team ranked No. 22 in the SBLive/Sports Illustrated Power 25. He committed to Georgia in November over Missouri, Texas Tech and UAB.

Five-star junior Isaiah Collier garners a ton of attention, and rightfully so, but his running mate in the Wildcats’ backcourt is a star in his own right. The 6-foot-3 Radford signee has been one of the team’s top scorers this year as he goes for his third state title at Wheeler.

The recent Stanford commit is a highlight machine and a fierce defender who can jump out the gym. It doesn’t take long to see why the 6-foot-1 junior is a consensus five-star prospect.

Charles is a dynamic combo guard who excels on both ends of the court. The 6-foot-3 uncommitted senior has surpassed the 35-point mark in multiple games this season.

Flagg is an imposing guard who uses his physicality to his advantage when attacking the rim or grabbing boards. The 6-foot-4 senior is fresh off a 23-point, 15-rebound performance in the Chargers’ win over W.D. Mohammed on Tuesday.

Hamilton is a rising star known for his ability to get downhill and put up big numbers in the scoring column. The 6-foot-6 junior has received offers from Alabama, Georgia Tech and Ole Miss.

Heath is a triple-double threat every time he steps on the court with his ability to rebound and block shots in addition to his role as an offensive playmaker. The 6-foot-4 Charleston Southern signee averaged 20 points, seven assists, seven rebounds and three blocks per game en route to winning region player of the year as a junior.

Hill has been consistent when it comes to putting the ball in the basket this season for the Patriots, who have played an elite schedule against some of the top teams in Georgia and the entire country. The 6-foot-4 senior has added recent offers from Tennessee Tech and Northwest Florida.

Littleton is a knockdown shooter who does a great job creating his own shot. The 6-foot-3 Appalachian State signee averages nearly 19 points per game for the Cardinals (12-0).

It can be a little confusing (but at the same time very fitting) having someone named Newton play for Newton. What’s clear is his two-way talent and impact on one of the top teams in the state. The 6-foot-3 junior who committed to Indiana prior to this season dropped 25 points in Newton’s win over Beaumont (Texas) in the Sugar Bowl National Prep Classic and was named the tournament MVP.

Sparks can play either guard position and always has to be respected for his deep 3-point range. The 6-foot senior is one of the best unsigned guards in Georgia who’s always willing to do the dirty work to help his team win.

Thacker is a deadeye shooter who is more of a natural shooting guard, but he does a great job facilitating for his teammates. The 6-foot-4 Virginia Military Institute signee averages over 14 points and four assists per game for the Storm.

It wasn’t a fluke when Wolle hit nine 3-pointers in a win over Grovetown earlier this season. The 6-foot-3 Rollins signee averages over 19 points per game for the Chiefs, with a majority of his points coming from beyond the arc.

Woods is a lethal shooter who can score in a variety of ways. The 6-foot-3 senior posted 35 points in the Panthers’ win over Brookwood on Jan. 7. He has college offers from Penn, USC Upstate and Richmond.