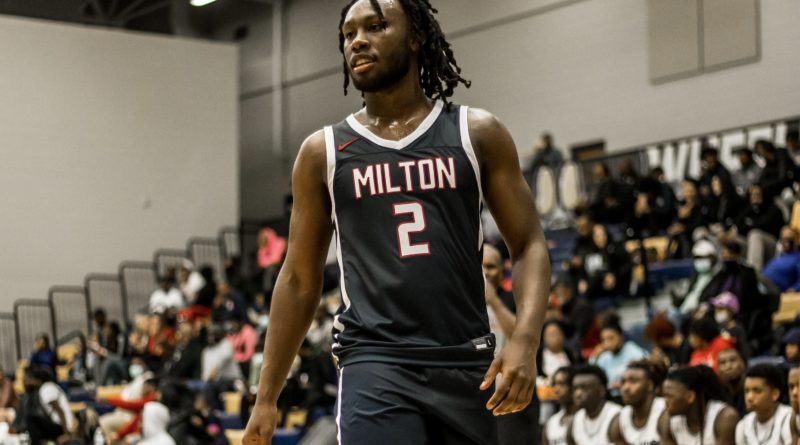 Over the next few weeks, we’ll be taking a position-by-position look at some of the top players in Georgia high school boys basketball.

Our first list will focus on the point guards.

There are hundreds of standout boys basketball players in Georgia, and these lists are not intended to be comprehensive! Use the comments section to discuss the other point guards worthy of fans’ attention in 2021-22.

Pictured above is Milton’s Bruce Thornton (photo by Willie Prince).

Castle is a big guard with a big game. The 6-foot-6 junior runs point for one of the top teams in the state, and he does major work on both ends of the court. Castle committed to UConn in November over Arkansas, Auburn, Ohio State and others.

Collier has all the potential to be the next great player to come out of the basketball factory known as Wheeler. Stars such as Jaylen Brown, Shareef Abdur-Rahim, JJ Hickson and EJ Montgomery all played for the Wildcats before moving on to college and eventually joining the professional ranks. The 6-foot-3, do-it-all junior has narrowed his college choices down to Alabama, Auburn, Cincinnati, Florida State, Georgia, UCLA and USC.

Cormier is a 6-foot-2 lefty with a smooth stroke. It’s never a good idea to leave the Northeastern commit open behind the three-point line, but he’s more than just a shooter. He excels at both guard positions and is capable of taking over a game on any given night.

Cottle shoots from NBA range and plays with a high level of energy. It’s impossible to find a highlight tape of the 6-foot-1 senior without any deep 3s or vicious dunks. The Kennesaw State signee surpassed 1,000 career points Dec. 10 in the Bulldogs’ win over Northeast.

Davis’ No. 1 tool is his defense, as he uses his quick hands to rack up steals. The 6-foot senior can play either guard position but excels at the point. Davis holds an offer from Stephen F. Austin.

Elliott returns as a senior leader for the Rams after helping the team win a region title in 2020. The 6-foot-1 combo guard has great vision and shot-creating ability. The North Carolina A&T signee dropped 30 points in the Rams’ (7-2) season opener, an 87-56 win over iSchool (Texas).

Forrest isn’t your typical point guard. With his well-built 6-foot-4 frame and goggles covering his eyes, he stands out physically, and his game is even more eye-catching. The uncommitted senior has recent offers from Appalachian State, Temple and Kennesaw State.

Johnson burst onto the scene in Georgia as a sophomore for the Blue Devils. The 6-foot-4 junior is at his best when he’s attacking defenses and driving to the rim. He’s focused on 12 schools recruiting him, including Alabama, Houston, North Carolina State, USC, Virginia and Wake Forest.

Rechsteiner has one of the smoothest jumpers in the state. The 6-foot-1 junior averaged 17 points and 4.5 assists per game through the first 10 games of the season. He holds offers from Mercer, Kennesaw State, Texas State and Jacksonville State.

Rideout was one of the key pieces from a Berkmar team that made the 7A state championship game in 2020, and he’s one of the reasons why the Patriots are primed for another title run this season. The 6-foot-2 senior is one the state’s best scorers at his position. He holds offers from Charleston Southern and North Carolina A&T, and more could be on the way.

Solomon is a two-sport star who plays quarterback on the football field and basketball court. The 6-foot senior excels at scoring and passing in the fast break and is an excellent rebounder for a player his size.

The 6-foot-2 senior is a true point guard with great vision and hands. His layup at the buzzer gave the Lions a win over Norcross on Dec. 11.

Thomas is a dynamic guard for the defending 5A state champions. The 6-foot-2 junior holds offers from LSU, Troy, Tennessee Tech and Mercer, among others.

Thornton runs point for the defending Class 7A champs. The 6-foot-2 Ohio State signee uses his athleticism to play a relentless, physical brand of basketball on both ends of the court. He led Milton to the 7A semifinals as a sophomore in 2019 and took it a step further with a state championship in his junior year.

Williamson is a crafty lefty who can create points in a variety of ways for himself and teammates. The 6-foot-2 junior has no college offers yet but is one to watch for the next year and a half.

Wilson is a quick guard who does excellent work in transition. The 6-foot-1 junior is in the midst of a breakout season for the Longhorns, consistently putting up 20-plus points per game.

Young is one of the best players in the state on one of the best teams in the state. The 6-foot-2 Rider signee is a great distributor who can score in bunches and light it up from beyond the arc. He was recently named to the All-Tournament team for the Tarkanian Classic after dropping 27 points in the consolation championship.