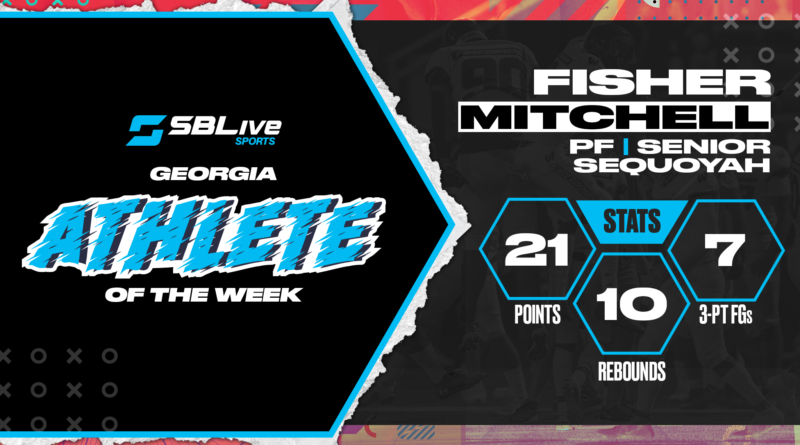 The senior had a double-double with 21 points, 10 rebounds and seven 3s for the Chiefs.

Mitchell received 51.49% of this week’s vote, beating out Baldwin’s Christian Burnett, who finished with 32.44%. West Forsyth’s Cayla Cowart finished third with 15.22% and Fayette County’s Kaleb Banks finished fourth with 0.23%. There were over 16,000 votes tallied this week!

Allard had one of the top performances so far this season with 43 points including 13 3-pointers in a 91-60 win vs. Cedar Shoals.

The Indiana commit has been averaging 33 points and 13 rebounds in his last four games and dropped 32 points and seven boards in a win over Luella.

Bowles was in the zone against Galloway, scoring 38 points, grabbing nine boards and dishing six assists.

Butler had the fastest competition time in the 50 free at 0:22.18, which is also the fastest so far this season.

Callahan scored 20 points and showed off his range in a win over Dalton.

Cowart scored 34 points and made five 3s in a blowout win against Walton.

The Clemson commit did it all with 23 points, 10 boards and 10 assists, capturing a triple-double in the Bulldogs’ 91-60 win over Cedar Shoals.

Hamilton stuffed the stat sheet in a win vs. Marietta with 20 points, 10 boards, three 3-pointers and four blocks.

Henderson was a major factor in Kell’s blowout win over Lassiter. She had 24 points, five rebounds, five assists and three 3-pointers.

Owens dropped 31 points and seven 3s in a win over Providence.

The reigning state champ went 4-0 on the weekend, increasing his season record to 7-0.

Spearman had 28 points, seven rebounds and three blocks in a win over South Gwinnett and is now Dacula’s all-time leading scorer and rebounder.

Taylor stuffed the stat sheet with 34 points, 10 boards, two assists and one block in a blowout victory against Douglas County.

Tidor had a monster performance against Carrollton with 40 points, 17 rebounds and six blocks.

Tiller was impactful on defense and on the boards with 14 rebounds and five blocks, while also adding 12 points.

Vines put his team on his back with 35 points as Aquinas squeaked by Hephzibah.

Burnett had 17 points and 5 rebounds for Baldwin in their 60-50 win against Jones County, including 4 3-pointers.