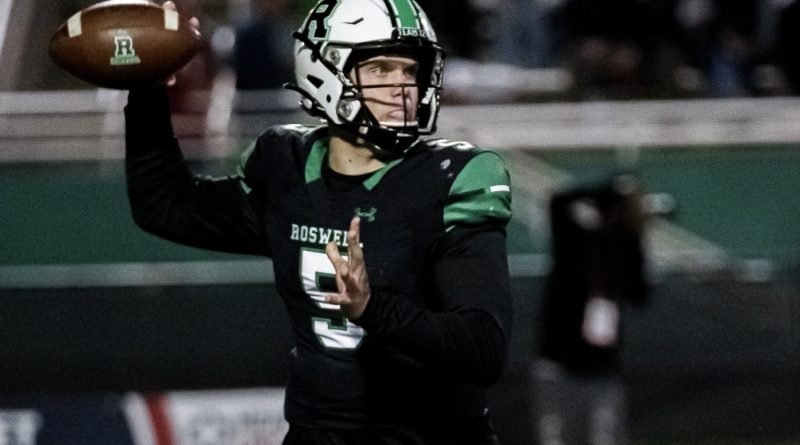 My introduction to Robbie Roper came in October 2020 during the Roswell quarterback’s junior year.

I was a reporter for a local newspaper, and he had recently moved to Roswell but was already making an impact with his new team. The Hornets were 3-0 heading into their annual rivalry game with Walton, and their new quarterback was a key reason why.

It was a wet, dreary Friday night when the rivals squared off at Ray Manus Stadium, but it was also the night Roper began cementing himself as a Roswell legend.

Down by seven points with less than a minute and 30 seconds left in the game, Roper led Roswell on a 98-yard scoring drive to tie the game and force overtime. On the second and third plays of the drive, he connected with Marquis Willis on deep passes for gains of 48 and 38 yards, respectively, to set up the game-tying touchdown run.

The Hornets wound up winning in overtime after an interception by Ethan Nation set up a Ryan Stephens touchdown run.

I would see Roper play four more times that season and twice his senior year while covering Roswell. Some games went better than others for Roper and the Hornets, but a few things remained the same.

I never saw Roper quit, no matter the circumstances, and I never left without becoming more impressed with him. And he loved football.

“It’s a bunch of fun,” Roper said earlier this season. “I moved here last year, so this is my second year (with Roswell). It’s just a bunch of fun winning, and the coaches make it fun, too.”

As a senior, he led Roswell to a 10-3 finish and trip to the 7A quarterfinals. The Hornets pulled off an unforgettable upset of nationally ranked North Cobb in the second round of the playoffs, capped off by Roper running for the game-winning touchdown as time expired.

He had a powerful but accurate arm and a knack for extending plays and finding a receiver downfield. He was a talented and smart player, but what stood out most was his persistence.

Roper’s family announced that he died Wednesday. By all accounts, he fought until the very end.

I mourn with and pray for Roper’s family, friends, teammates, coaches and all those who were lucky enough to know him.

While the circumstances are unimaginable, it’s beautiful — and very telling — to see the outpouring of love for Roper since the news broke.

Hundreds, if not thousands, have offered messages of love and support for Roper and his family and shared fond memories of the gunslinger.

One of my favorite memories of Roper is the time he nearly crushed me while scrambling for extra yards.

I was snapping pictures from the sideline during the 2021 Roswell-Milton game when I was almost run over by the 6-foot-4 quarterback.

Luckily he was able to hit the brakes as I backpedaled, and the two of us avoided a collision.

He must have seen the look of fright on my face turn to relief, and we shared a chuckle that said, “Well that could’ve been worse,” before he ran back on the field.

It was late in the game, and Roswell was down by multiple scores. Roper had been chased by Milton’s vaunted defensive line all night, but he still was competing and having fun out there.

I’d like to think Robbie is up in heaven’s stadium right now, scrambling around and throwing touchdowns with a huge smile on his face.