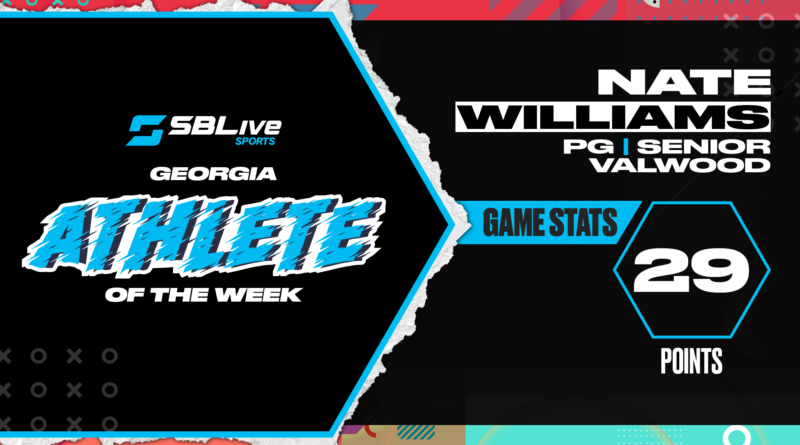 The senior led the game in points scored and was the only Valwood player to score double digits with 29 points in a 75-45 loss to Terrell Academy.

Williams ran away with this week’s honor, receiving 80.75% of the total vote.

Arnold rushed for a season-high 320 yards and five touchdowns in the 56-28 state championship win over Irwin County.

Berry pulled off a double-double with 19 points and 15 rebounds to lead Valdosta to a 71-41 win over Cook County.

Dallas threw for 263 yards and four touchdowns while adding another score on the ground in the 55-28 state championship win over Prince Avenue Christian as Trinity Christian became the first Coweta County school to win a state title.

Edwards scored a season-high 33 points in a 75-54 win over Savannah Christian.

Ewin had 25 points and 10 rebounds in a 73-62 win over Milton in the Hawks Naismith Classic.

Geriner threw for a career-best 397 yards and four touchdowns in the 35-28 state championship win over Carver-Columbus.

Hunter forced a fumble on defense and caught 10 passes for a game-high 153 yards and a score in the 24-8 state championship win over Milton, leading Collins Hill to its first state title in school history.

Mooney had a double-double, scoring 20 points and snagging 14 rebounds in a 66-57 win over defending region 6-7A champion South Forsyth.

Talkington threw a touchdown pass and caught one with less than a minute to go in a 12-0 win over defending state champion Calvary Day.

Watson made her presence felt all over the court in a win over Banks County as she accounted for 24 points, three rebounds, three steals, two assists and two blocks.