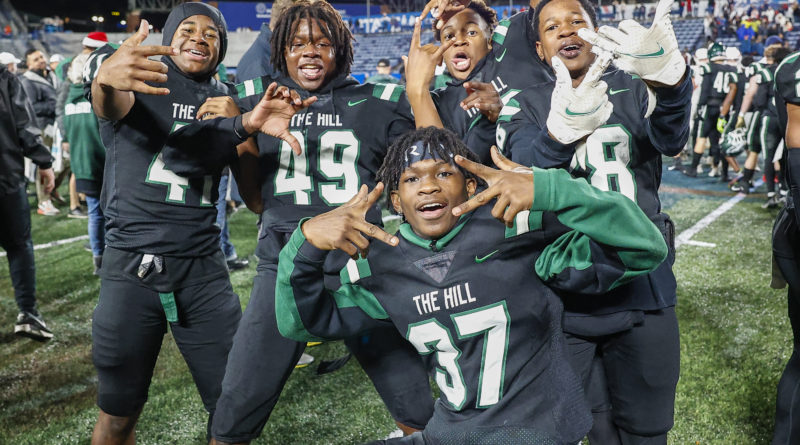 Collins Hill completed one of the most dominant seasons in Georgia high school football history with the payoff that looked evident for weeks — its first state championship.

The Eagles’ 24-8 win over Milton on Saturday night in Atlanta was their closest against in-state opposition all season, and they weathered a different kind of game to get there.

The Milton Eagles controlled the clock in the first half by keeping the chains churning, but they couldn’t score, sending Collins Hill into halftime with a 7-0 lead in two quarters played so fast that the lightning delay from earlier Saturday seemed to vanish.

While the defense continued to do what it had done all year — not let the other team score — the potent Collins Hill offense got the ball first in the third quarter and got in gear.

A 6-yard Sam Horn TD run followed by a 6-yard TD toss from Horn to Travis Hunter and suddenly it was 21-0 heading into the fourth.

After a 1-yard TD run by Milton quarterback Devin Farrell made it 24-6, tight end Jack Nickel made the catch of the game for the two-point conversion, a one-handed grab in the corner of the end zone to make it 24-8.

Then Collins Hill copied what Milton did in the first quarter — the offense drained the clock — and before you knew it, the players were giving coach Lenny Gregory a celebratory ice douse.

Hunter finished his final high school football game with 10 catches for 153 yards and a touchdown, and he forced a fumble on defense. Fellow senior Horn had 243 yards passing with two touchdowns, plus 35 yards rushing and a score.

Collins Hill’s closest game of the season was a 37-22 victory Sept. 3 over Greenville Christian (Mississippi). The Eagles gave up only 51 more points over their next 12 games, an average of 4.3 per game, to finish a magical season as Class 7A state champions carrying a 15-0 record.