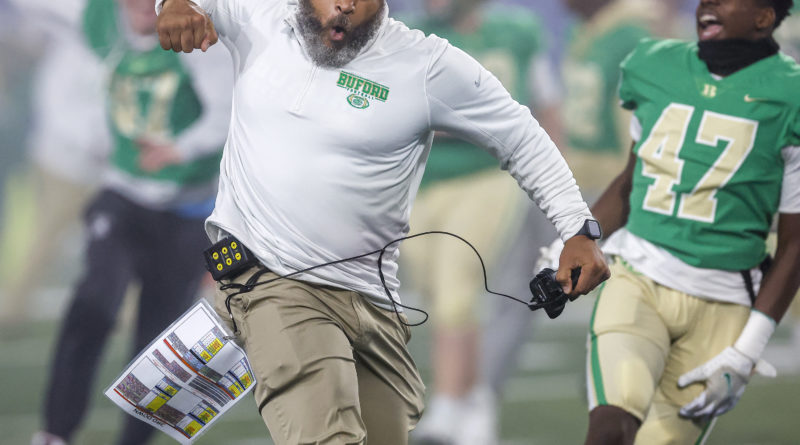 In the game of the playoffs thus far, Langston Hughes missed a 35-yard field-goal attempt at the whistle to preserve Buford’s third straight state championship with a 21-20 comeback win.

It was Langston Hughes kicker Alan Gonzalez’s first field-goal attempt this season, and it came up short.

Buford made it three straight years winning state championships on the final play, and the Wolves had to claw back from a slow start Friday night in the fog against Langston Hughes, which was making its first championship game appearance.

The Panthers took a 7-0 lead on a 33-yard touchdown pass from Prentiss Noland to Armani Tookes. A Rodney Shelley interception then helped set up running back Antonio Martin to run it in from 5 yards out to take a 14-0 lead as Langston Hughes dominated Buford up front.

Buford got back in the game just before halftime, getting a 4-yard TD run from CJ Clinkscales with four seconds left to make it 14-7.

After an Ashton Daniels QB sneak to tie it, Martin — who finished with 164 yards rushing yards and two touchdowns — struck again for a 30-yard TD run in the final seconds of the third quarter, but Gonzalez missed the extra point.

Tobi Olawole’s 34-yard catch from Daniels with just under three minutes remaining, plus the extra point, proved to be the game-winner.

Buford won the Class 5A state title in 2019 (in overtime over Warner Robins) and has won two Class 6A titles in a row after its overtime win last year over Lee County.

The Wolves will try to make it four straight state championships in Class 7A next season.