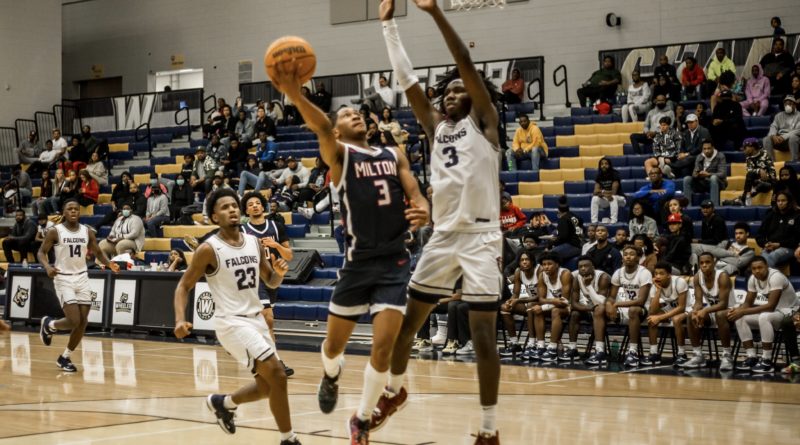 Milton fell from the top spot after losing to Pebblebrook, while Newton moved up to No. 1 after remaining undefeated.

South Gwinnett, Osborne, West Forsyth and Buford introduced themselves to the all-classification SBLive Top 25 after their strong starts.

Pebblebrook put the state and nation on notice after blowing out previous No. 1 Milton 64-47.

Grayson remains 4-1 after a week off and will face Sparkman (Alabama) on Tuesday.

Milton’s win streak against Georgia opponents ended at 22 after a 64-47 loss to Pebblebrook over the weekend.

Sandy Creek remains undefeated after blowing out Fayette County 77-45. The Patriots are outscoring their opponents 347-263.

Norcross is riding a four-game win streak after wins over Woodward and Pace Academy.

Wheeler’s season started with matchups against two of the top 10 teams in the nation. The Wildcats rebounded well with two straight wins but then fell to McEachern 86-63.

Berkmar hasn’t played since its opening loss to Greenforest and will face Archer on Tuesday.

Pace Academy took the Norcross loss on the chin and hasn’t looked back since. The Knights have won three straight, most recently handing East Coweta its first loss in a 73-46 blowout.

St. Pius has won four straight since its opening loss to Father Ryan (Tennessee), including two straight against region opponents.

Baldwin pushed its win streak to 21 including last year’s undefeated season. The Braves had back-to-back games against Wilkinson County, both resulting in 20-plus-point blowouts.

North Gwinnett traveled to Kentucky to participate in the Marshall County Hoopfest and left with a record of 1-1. The Bulldogs will face Mill Creek on Tuesday in their return to Georgia.

South Gwinnett hasn’t had a start this dominant since 2010. The Comets are running through their competition and also have big wins over Buford and Chattahoochee.

Shiloh hasn’t played since hosting the Hoopsgiving Tournament and won’t see any action until Saturday vs. Huntsville.

Hillgrove’s streak stands at seven games. The Hawks are trying to catch their record of 10 straight to start the season that happened in 2008. Their next opponent is McEachern on Tuesday.

Westlake has won three straight after an alarming 1-3 start. The Lions schedule doesn’t ease up with North Atlanta and Norcross up next.

McEachern ended its three-game skid playing a tough early-season schedule after taking down Wheeler by 23 points.

Cross Creek’s 20-game win streak dating back to last season was snapped with a loss to Butler. The Razorbacks look to start a new streak after their win against Laney.

For the past six seasons Osborne has eclipsed eight wins only once. The Cardinals already have wins over Dacula, Kell, Jonesboro and Pope.

Buford’s only loss was by three points and came against undefeated South Gwinnett. The Wolves’ last two games have shown how much of an offensive juggernaut they can be, scoring 92 points against Parkview and 82 against Hart County.

McDonough’s five-game win streak came to an end at the hands of Eagle’s Landing. The Warhawks; fourth quarter rally came up just short as they fell 60-54, but they did close a double-digit deficit.

West Forsyth has won six straight games since its opening loss. The Wolverines are averaging 70 points per game and scored 88 in their last contest against Creekview.