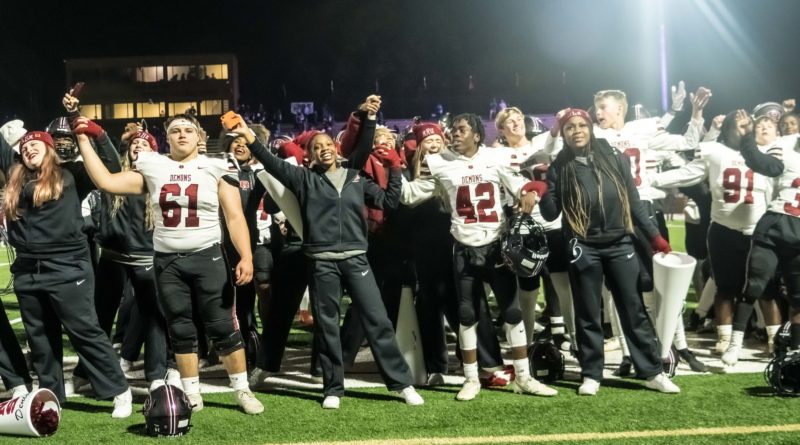 COLLEGE PARK, Ga. — Warner Robins is heading to its fifth straight state title game, earning a ticket to downtown Atlanta next week with another dominant performance in a 40-15 victory over Creekside.

Warner Robins head coach Marquis Westbrook has done nothing but win since he took over the program. All three of his years leading the Demons have ended with a championship game appearance, including winning it all last season.

“Our team stepped up to the challenge,” Westbrook said. “We had a really tough opponent that we had to prepare for, and we did it. I had a good feeling in my stomach.”

Although the game was played at Banneker High School, Creekside had the crowd and home-field advantage.

That advantage vanished in the first quarter when Warner Robins came out as a team on a mission.

The Demons opened the game by asserting their dominance in the run game.

Chaz Sturn started the party with a 34-yard run up the middle on the Demons’ first possession to put them up 7-0.

JaFredrick Perry joined the fun with 11- and 10-yard runs to give Warner Robins a quick 21-0 lead.

The Creekside crowd had been silenced, while Warner Robins’ fans were erupting.

Creekside came into this matchup second in the state in sacks, but Warner Robins gave the Seminoles a taste of their own medicine Friday night.

The Demons sacked Creekside quarterback Nyqua Lett eight times in the first half, barely giving him a chance to get his fingers on the laces before a defender was breathing down his neck.

Lett, who is usually fleet of foot and adept at evading defenders, struggled to gain any traction — a theme for the Seminoles offense as a whole.

Creekside running back Cameron Burch frequently found either no gain or a tackle for loss, and once Warner Robins jumped out to an early lead, the Seminoles had to try their luck through the air.

“All credit goes to them,” Creekside coach Maurice Dixon said. “They were able to make adjustments and extend drives and put points on the board. Then it got to a point where we had to throw the ball, and they’ve got some guys who can get after the passer pretty well, and we didn’t do a good job of picking up the protections.”

Dixon added that his squad wasn’t “special on special teams,” digging his team in some field-position holes.

An errant snap on a punt sailed out the back of the end zone, and multiple kickoffs went out of bounds, giving an already dangerous Warner Robins offense great field position.

Perry ended the night with four touchdowns on the ground and seemed to pick up steam as the game went on.

“I work hard every day in the weight room,” Perry said. “I do what I’m supposed to do on and off the field.”

Westbrook has loved what he’s seen in Perry since taking over for the injured Malcolm Brown.

“His personality fits his play,” Westbrook said. “He is tough, physical, and he is going to come at you. On both sides of the ball he is going to bring it. He brings a different energy to our program, and we appreciate him for that.”

Dixon lamented after the game that “we didn’t play Creekside football,” which he described as being able to run the ball, play great defense, give up no turnovers, no big plays, and to be special on special teams.

“The goal is to play in and win 15 games,” Dixon said. “God told me that I’m not going backwards, we have improved every year. We won 11 games this year — now onward and upward.”

While Creekside’s season is done, Warner Robins has one more game to be played.

The Demons will take on Calhoun next week for a chance to add their sixth state championship to an already crowded trophy room.