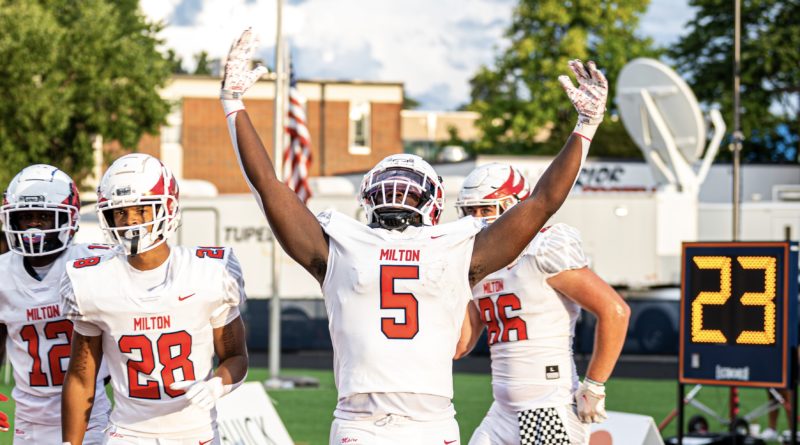 MILTON, Ga. — It’s no secret. Milton head coach Adam Clack has said it time and time again during his team’s run to the state championship.

When the stakes are high, the Eagles are going to lean on their run game — powered by a mammoth offensive line and two dynamic ball carriers in Devin Farrell and Jordan McDonald — to bring them home victorious.

That’s been Milton’s bread and butter all season, even more so in the playoffs, and it was no different Friday as the Eagles defeated Walton 52-17 to earn a spot in the 7A state championship game.

Milton rushed for nearly 300 yards as a team, led by UCF commit McDonald, who posted 159 yards and four touchdowns on 18 carries. Farrell, a Virginia Tech commit, rushed for 61 yards in addition to passing for 105 yards and one touchdown.

“That offensive line is very special,” Clack said. “And the combination of (McDonald and Farrell) in the backfield is a nightmare.”

Milton struggled to find its way offensively in the early stages of the game as Walton jumped out to a 10-0 lead. Halfway through the second quarter, the Eagles settled in and began their charge.

Felipe Mota put Milton on the board with a field goal to make it 10-3, and shortly after, McDonald rushed for his first touchdown of the night to tie the game. The Eagles took the lead for the first time with 10 seconds left in the first half, as McDonald scored again to put them up 17-10.

The onslaught continued in the second half with an 81-yard, Beast Mode-esque touchdown run from McDonald. Four minutes later, he added his fourth and final touchdown of the night to put Milton ahead 31-10.

After one more Milton touchdown (a 26-yard pass from Farrell to Brooks Bortle) made it 38 unanswered points for the Eagles, Walton ended its drought with a touchdown.

The Raiders (9-4) had control and momentum for much of the first half, but once it slipped away there was no going back. After jumping out to a 10-0 lead, Walton was outscored 52-7.

Their opponent will be Collins Hill (14-0), widely considered the top team in Georgia and one of the top teams in the country. Still, Clack doesn’t expect Milton to buy into any talk of being the underdog.

“I’m not worried about that one bit. In ’18 that was the storyline, and it was something we hit head on. We said, ‘Don’t you dare let anybody look at you and say I bet you’re just happy to be here.’ We believed in our hearts that we could overcome anything. I don’t look at this team as having to climb any mountain.