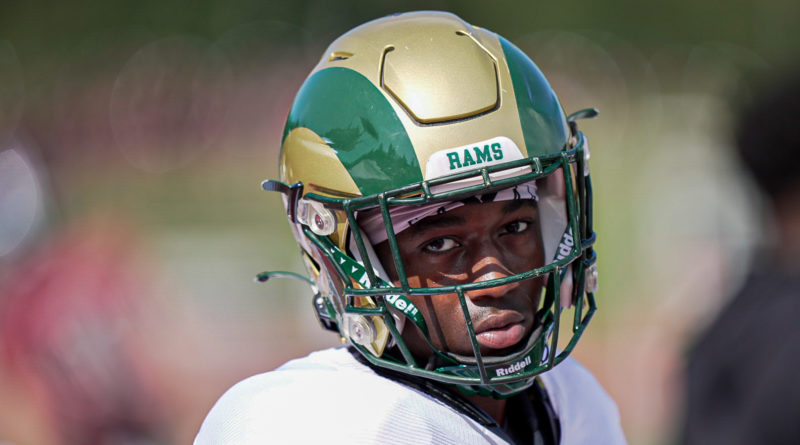 When Collins Hill and Grayson last met on a football field — on the turf at Georgia State’s Center Parc Stadium in the 2020 Class 7A state championship game — the roles of the two teams were clearly defined.

The Eagles were a young, talented squad playing in the state finals for the first time in the program’s history, facing a Rams team loaded with 11 eventual Power Five conference college signees, and Grayson claimed its third title in a decade with a 38-14 win.

When the two teams meet in this year’s state semifinals at 7:30 p.m. Friday at Alan Fahring Field, much will have changed beyond the game coming a round earlier.

“(Grayson has) got good players,” Collins Hill coach Lenny Gregory said. “Obviously, you’ve got two teams playing in the semifinals, so both teams have earned the right to be here.”

This time, it will be No. 1-ranked Collins Hill (13-0) entering as a prohibitive favorite after routing Lowndes 49-7 in last Friday’s quarterfinal in Valdosta, and why not?

Led by five-star senior Travis Hunter — a Florida State commit who has 67 receptions for 1,009 yards and 10 touchdowns and is one of the nation’s top lockdown cornerbacks with four interceptions — and four-star Missouri-bound quarterback Sam Horn, who has thrown for more than 3,500 yards and 36 TDs, Collins Hill is very much deserving of its consensus top-five status in the national rankings.

Throw in a pair of juniors ranked in the top 40 in Georgia for that class in tight end Ethan Davis (54 catches, 666 yards, eight TDs) and safety Jayden Davis (58 tackles, three interceptions) , and the Eagles boast a roster as talented as Grayson’s a year ago.

Meanwhile, the Rams are in the midst of a solid 10-3 season and have a few stars of their own in three-star West Virginia-bound cornerback Mumu Bin-Wahad (40 tackles, seven tackles for loss, three interceptions) and four-star junior safety Michael Daugherty (79 tackles, 14½ tackles for loss, four sacks).

Yet they come into Friday’s game with a far younger and less playoff-tested roster than Collins Hill.

As compelling a storyline as that role reversal may seem to fans and local and national media, neither coach want to focus on anything but their respective game plans.

“Those things are great for sports writers to write about, and all that,” said Gregory, who spent seven seasons at Grayson as defensive line coach, and later defensive coordinator, from 2008-14, including for the Rams’ 2011 Class 5A state title team, before taking over at Collins Hill in 2017. “But for a football coach trying to run a program, we don’t look at things like that. We look at, ‘How can I fix my mistakes from last week, and how can get our kids to the best of the ability that they can play?’ That’s all I’m worried about right now.”

The Eagles have faced all season from within and outside the program, but the path coach Adam Carter and Grayson (10-3) have taken to Friday’s game has been filled with potholes.

Faced with the aforementioned young roster filled with underclassmen and numerous injuries, the Rams had some early-season struggles.

But they’ve managed to grow up over the course of the season, particularly during the playoffs, where they have outscored their previous three opponents 107-49, including last Friday’s 24-14 quarterfinal win at No. 10 Roswell.

“I think some of that was just learning experience and maturing a little bit,” Carter said. “We’ve been playing so many different people defensively, it’s ridiculous. You look out there with who we’re starting right now, and there are four or five kids — well, two of them are freshmen — who were (junior varsity) starters this year. They’re starting on Friday nights right now, and since that Brookwood game, there were like six weeks in a row where we had started different kids every Friday night in the secondary.

“So hopefully, it’s just a matter of getting them to play together a little more and showing just experience in general, I guess. Some of that has to do with me. It took some time to figure out what our kids could do well and what they couldn’t do well, where we were at as a team and which direction we needed to go philosophy-wise and those sort of things. Hopefully now, we’ve figured out our identity a little bit. By Week 13, you better have, right? … Now we’ve kind of settled in, and we’ve been injury-free the last couple of weeks, and that’s helped us.”