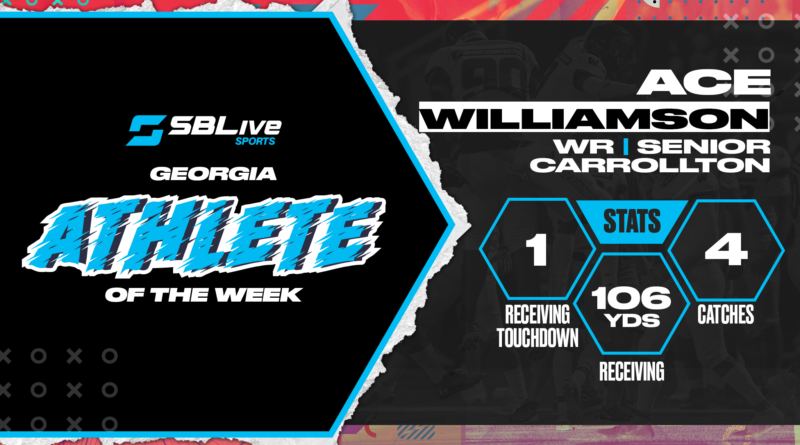 Congratulations to Carrollton wide receiver Ace Williamson for being voted SBLive’s Georgia High School Athlete of the Week for Nov. 15-21!

The senior caught four passes for 106 yards receiving and a touchdown in a 43-21 win over Alcovy.

Williamson received 46.36% of the vote, beating out Crisp County K David Mitchell who finished second with 36.37%. Peach County QB    Colter Ginn finished third with 6.52% and Creekside WR Derrick White finished fourth with 5.84%. There were over 43,000 votes tallied this week!

Here are the other athletes who were nominated for Nov. 15-21:

Brown threw the game-winning touchdown pass that put Lowndes up 35-34 with 1:17 remaining, and then he caught the interception that sealed the win vs. Norcross.

In Hunter’s first game back after suffering a severe leg injury earlier in the season, he caught a touchdown pass and grabbed an interception in a 48-6 win over Pebblebrook.

Collier led the Wildcats to a 62-60 comeback win over Grayson with a team-high 23 points.

Journey rushed for two touchdowns, including the score that sealed Mill Creek’s 52-30 win over McEachern.

Speer finished the night with 10 catches for 201 yards and a touchdown in a 49-42 win at Ware County.

White finished with over 100 yards receiving and caught two touchdown passes of more than 50 yards in the 41-34 win over St. Pius X.

Barnes scored two touchdowns in the first half, including a 53-yard screen pass on the first play of the game, in a 30-0 victory over Spalding.

Smith threw three touchdown passes in the first half in a 48-7 win over Northwest Whitfield.

Bell rushed for 300 yards and five touchdowns in a 49-0 shutout of Dawson County.

Adams rushed for three touchdowns and threw for one score in the 41-14 win over Columbia.