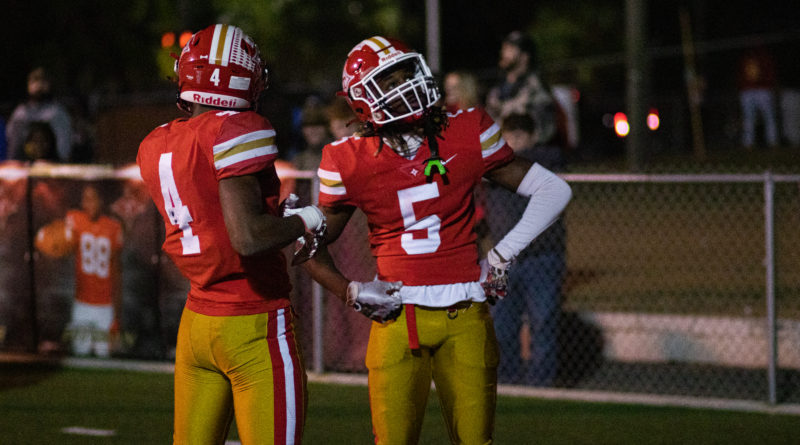 Thomasville ensured neither of those things would happen with a dominant performance on both sides of the ball in a 49-24 home win Friday night.

“We talked about adversity a lot this week,” Thomasville head coach Zach Grage said. “We knew they were going to score points, we knew we’d have some issues, but we just had that ‘I got your back’ type of mentality with our guys.”

Thomasville linebacker Ty Anderson was in Stockton’s face all night, and the Bulldogs’ defense left the future Georgia Bulldog trying to escape a relentless pass rush while his nose bled from a series of hits.

Stockton accounted for all three of his team’s touchdowns as he threw two touchdown passes while rushing for one score, but he fell well short of the 409 yards passing needed to break Trevor Lawrence’s career yardage record.

“I don’t think you can shut a kid like (Stockton) down, but I think we played hard and well,” Grage said. “Hats off to our DBs for not giving him a place to throw and for being relentless.”

Thomasville scored first as Harper rushed for a 2-yard touchdown, and then Rabun County answered with a 24-yard touchdown pass from Stockton to running back Lang Wyndham.

Thomasville regained the lead after Harper rushed for his second touchdown, a 13-yard rushing score.

On the ensuing drive, Stockton rushed for his only ground score of the night, as he pushed it in from 6 yards out on fourth down to make it 14-14 midway through the second quarter.

After White’s 62-yard rushing touchdown and his 11-yard touchdown pass to wide receiver Cole Shaw, Thomasville had a 28-14 lead at the half and all of the momentum.

Rabun County was the first to score in the second half as kicker Gus Hood kicked a 50-yard field goal to cut the lead to 28-17.

Then Thomasville took over.

Thomasville’s last scoring play, a 5-yard pass from White to wide receiver Demorrio Thurman in the fourth quarter, was enough to put the game away for good at 49-17.

Stockton threw his last pass as a high school quarterback with about a minute left to play, as he hit wide receiver Jaden Gibson on a 20-yard touchdown pass to make it 49-24.

Thomasville will host Callaway next Friday for a spot in the Class 2A state championship game.