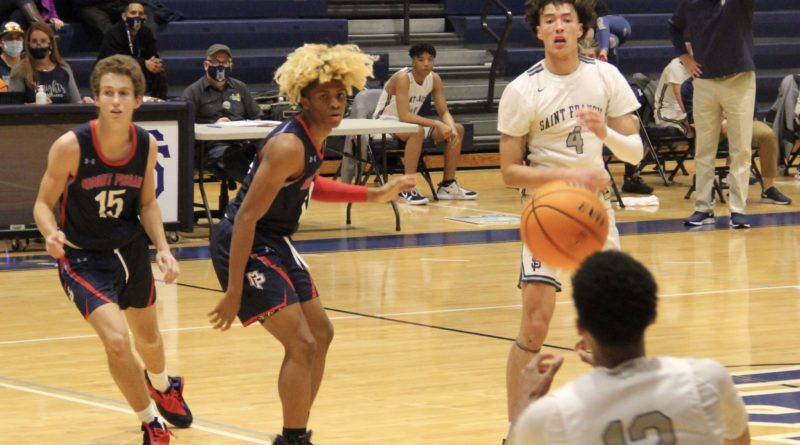 As the high school football playoffs hit the stretch run in Georgia, basketball is having a big week of its own with holiday tournaments.

But after the football season ends, and a number of players exchange their cleats for sneakers, the basketball season will take center stage.

10 STORYLINES TO WATCH IN BOYS BASKETBALL

Milton dominated its way to a 28-3 record last season, winning the 7A state championship and making the Geico National tournament, and the Eagles brought back most of their best players from that squad. They’re a guard-powered group led by Ohio State signee Bruce Thornton, five-star junior Kanaan Carlyle and Northeastern signee Chase Cormier, who is playing his first season at Milton after transferring from Class A Private’s Greenforest. Entering the season, many media outlets tabbed Milton as the favorite to win it all in 7A and one of the top teams in the entire country. The Eagles (1-0) are ranked No. 3 in the SBLive/Sports Illustrated Power 25 and are scheduled to travel out of state to play in four national tournaments, so there will be plenty of opportunities to see how they stack up with the country’s best. Two Milton players, both of whom started for the team in its season opener, were arrested Nov. 17 on suspicion of murder. To repeat as 7A state champions and keep building national hype, the Eagles will need even more than they expected out of their star players.

Who is the favorite to dethrone Milton in Class 7A?

Berkmar, the 7A runner-up last season, has the potential to make another run behind returning seniors Malique Ewin (Ole Miss commit), Jameel Rideout and Jermahri Hill. With a talented and experienced core, the Patriots should be in the mix come tournament time as long as they remain healthy. A team that could get in the way of championship-hopefuls like Berkmar and Milton is Newton. The Rams feature three junior guards who can take over the game on any given night in Stephon Castle (UConn commit), Jakai Newton (Indiana commit) and Marquavious Brown (Georgia commit). With two impressive wins over Concordia Lutheran (Texas) and Norcross, Newton looks like a young and dangerous team that should only gain experience as the season progresses.

Does Wheeler pull off a three-peat?

After winning the 6A state championship last season and the 7A title the previous year, the Wildcats are shooting for a three-peat in 2021-22. Five-star guard Isaiah Collier paces a Wheeler team that’s one of the best in the state regardless of classification. The 6-foot-3, do-it-all junior has narrowed his college choices down to Alabama, Auburn, Cincinnati, Florida State, Georgia, UCLA and USC. Although Collier is the main attraction at Wheeler games, the Wildcats have much more to show off than their bell cow, which is why they’re considered a national power and the preseason favorite to take home the 6A state championship. Wheeler (1-1) opened its season with a 62-60 win over Grayson before traveling to Texas to take on Duncanville, the No. 6 team in the SBLive/Sports Illustrated Power 25. The Wildcats lost 80-56, and their next game is Saturday against No. 1 Montverde Academy in the Holiday Hoopsgiving in Atlanta.

Fresh off a 29-1 finish and 5A state title last year, Eagle’s Landing appears primed to repeat as the champion once again in 2021-22. The Eagles have a serious one-two punch in AJ Barnes and David Thomas, and there are several pieces around them who return from last year’s squad. If you’re looking for a team that could threaten the Eagles, watch out for Tri-Cities. The Bulldogs made it to the state championship last year and won the previous year, so they’re no strangers to ring chasing. Plus, Kennesaw State signee Simeon Cottle is one of the top guards in the state, so it would be foolish to count out Tri-Cities.

Does Class 4A go through Baldwin again?

Baldwin went a perfect 17-0 and won its first state title in 40 years last season, so things can’t get any better for the Braves, right? Wrong. With a bevy of players from last year’s 4A state championship team returning stronger and more experienced, it’s safe to expect another big season out of Baldwin. Fayette County, the team Baldwin beat in the state championship game, figures to be in the mix once again this season. A huge reason why is 6-foot-7 Indiana signee Kaleb Banks, one of the top forwards in the country. It wouldn’t come as a big surprise if the Braves and Tigers end up meeting in Macon to play for a state title for the second year in a row.

How will expanded use of a shot clock affect games?

Coaches and players are well aware, but for fans who might have forgotten or never knew in the first place, this season marks the second of a three-year introduction to shot clocks in Georgia high school basketball. In year one, shot clocks were allowed only at approved holiday tournaments and showcase games. This year, it’s up to regions to decide whether to use shot clocks in all-important region play.

Expect to see widespread use of shot clocks once this time of year comes around, as most will want to prepare for next season when shot clocks will be required in all varsity games, from the opener to the state championship. So how will the use of a shot clock, which will last 30 seconds each possession, change the sport? No longer can teams build a lead, then slow down their offense to the point where the game begins to look less like basketball and more like soccer. This aspect of the change should create more points on the board and leave fans happier. But how quickly will players — and even referees and officials who work the scorer’s table — adapt to the expanded use of shot clocks?

Will this be the year Sandy Creek breaks through and wins a state championship?

Sandy Creek has had some great teams over the years, but the Patriots have zero state titles to their name. Last year’s team came as close as any in program history but fell just short against Cross Creek, 57-49, in the 3A state championship game. Without Jabari Smith and Myles Rice, now at Auburn and Washington State, respectively, the Patriots enter a new era. But it doesn’t seem to be a dark one. A new dynamic duo is quickly on the rise at Sandy Creek with sophomores Amari Brown and Micah Smith, who both hold Power Five offers. Pair them up with guys like senior Aidan Bevrotte and junior Vic Newsom, and Patriots head coach Jon-Michael Nickerson has some big pieces to work with in their quest for a state title.

How will Pace Academy look following the graduation of five-star Matthew Cleveland?

Coming off a 2A state title last year and a 3A state title the year before, Pace Academy has its sights set on winning another championship. The Knights will look different this season without five-star Matthew Cleveland (Florida State) leading the charge. They still have two-time state champion Josh Reed, now a senior who recently committed to Cincinnati. Sophomore guard Kyle Green holds offers from Georgia Tech, Georgetown and multiple SEC teams, and freshman forward Bryson Tiller has already received offers from Auburn, Georgia Tech and Tulane. Sure, opposing teams can breathe a sigh of relief not having to worry about Cleveland anymore, but Pace still has plenty of firepower to add another trophy to its collection — this year and for years to come.

Which Class A private team will be first to stand out?

Entering the season, there’s arguably no class with more parity than Class A Private. Region 2 in Atlanta has perennial power Greenforest, led by senior guard Jalen Forrest and 7-foot junior Gai Chol, two players with a long list of college offers. Region 5, which has no rhyme or reason geographically, includes Galloway (Anthony Arrington Jr.) and Providence Christian (Chance Thacker), which have two of the best players in the state. Region 6 in the North Fulton area features the defending state champion Mount Pisgah along with the winner of the two previous state titles, St. Francis, and up-and-coming King’s Ridge. Region 7 in northwest Georgia has Christian Heritage (final four) and Darlington (sweet 16) bringing back key pieces from playoff runs. Any of the teams mentioned above have a chance to win it all, but when will one of them begin to rise above the rest and show they’re the team to beat in Class A Private?

Which classification is the deepest this year?

It’s a question asked almost every year for every sport: Which classification is the deepest? Georgia features some of the best high school basketball in the country, and talented teams and players can be found in all eight GHSA classifications. But which classification is the deepest, the one filled with the most championship-caliber teams? Last year, the answer to this question might have been 6A with teams like Wheeler, Kell, Lee County, Westlake, Centennial and Chattahoochee. Some of the aforementioned teams are championship contenders this year, too, but the class that appears deepest entering the season is 7A. Besides Milton, the defending state champion and No. 3 team in SBLive’s national rankings, 7A is home to Berkmar, Newton, Norcross, Pebblebrook, Grayson, North Gwinnett, East Coweta, Etowah and more teams loaded with talent and experience. An honorable mention: Class A Private.