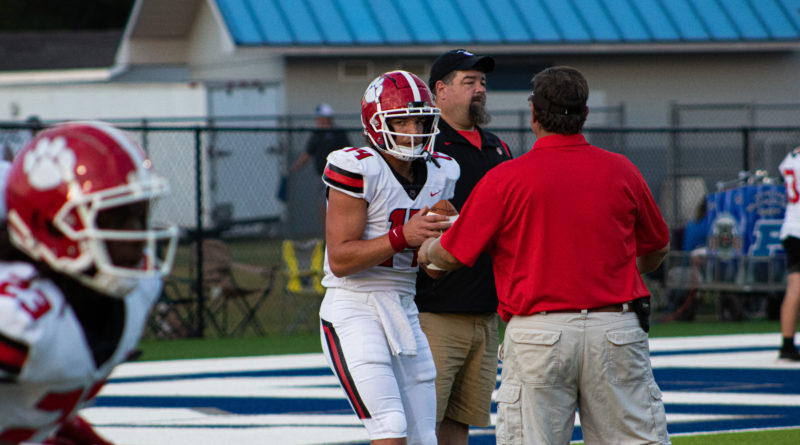 Spots in the Final Four will be on the line on Black Friday, and another state passing record could fall in South Georgia.

Rabun County quarterback Gunner Stockton is 409 passing yards away from breaking Trevor Lawrence’s career record, but he’ll have to do it over 300 miles away from home against Thomasville’s wicked pass rush.

(All games are at 7:30 p.m. Friday unless otherwise noted)

TOP 10 GEORGIA FOOTBALL GAMES TO WATCH IN ROUND 3

Walton has shaken off a tough blowout loss to Marietta to end the regular season by putting together back-to-back blowout wins to start the playoffs. The way the Raiders have been playing, you would think their chances are as high as any, but Walton has a weird streak of suffering a loss after every two wins. Brookwood is riding high on an eight-game win streak. Other than the Broncos’ opening loss to Collins Hill, their only other loss was by two points. This game will also showcase arguably the best junior quarterback in the state in Dylan Lonergan, who has over 3,400 total yards and 36 total touchdowns.

Whitewater did a great job of shaking off its opening loss and has rattled off 11 straight victories. The Wildcats come in at second in team rushing at 3,700 yards and 10th in rushing touchdowns at 44. They will run early and often Friday. Creekside’s defense is elite, and while it will be a tough time slowing down the second-ranked rushing offense, the Seminoles have some superstars on the defensive side of the ball. Vincent Hill is the third-leading tackler in the state at 163 tackles, Javeon Miller is third in sacks at 21, and they have four other players with four or more sacks.

Many might look at this matchup and assume Warner Robins will advance, and understandably so. Warner Robins has a top-five offense behind Christon Lane at quarterback, Malcolm Brown at running back and Daveon Walker at receiver — arguably the best trio in the state. Together they have 63 touchdowns and over 4,700 yards, more than many offenses as a whole. The Demons will need those three to be big if they want to repeat as champions. But Jones County has an impressive trio in JohnAlan Richter at quarterback, Javious Bond at running back and Zion Ragins at receiver. Those three have combined for 5,830 yards and 72 touchdowns. So whoever comes out on top, one of the two big threes will likely be a major cause.

Collins Hill is the No. 1 team in the state for obvious reasons. The Eagles have left a path of destruction in their wake, pummeling opponent after opponent. The most points they have allowed this season came against one of the premier schools in Mississippi, in which they gave up 22 points to Greenville Christian but left with the win. Against Georgia opponents, Collins Hill has allowed only 46 points on the season, an average of four points per game, including five shutouts. The offense is averaging 40 points a game, and both sides of the ball have No. 1 recruit Travis Hunter back from injury. Lowndes will have its hands full for sure, but the Vikings are riding an eight-game win streak. Quarterback Jacurri Brown has been one of the best dual-threat QBs in the nation, with over 3,000 total yards and 33 total touchdowns. For the Vikings’ defense, WC Fulton has been a game-wrecker with 12 sacks. They will need that same pass-rush dominance to slow down Sam Horn and the Eagles offense.

Apart from Marist’s five-point loss in Week 2 to Woodward Academy, the War Eagles have cruised. In their current nine-game win streak, they have scored 409 points while allowing 95. They’ve scored 97 points in two playoff games and allowed only 14, so the War Eagles are red hot. Even with the way Marist has been lights out on defense, the Benedictine offense is the real deal. Benedictine is one of the few teams that has scored 600 points this season. In their current 10-game win streak, the Cadets have not scored fewer than 48 points. Plus they have had 70- and 60-point outings along with five 50-plus-point performances. The winner of this game looks like the favorite to be crowned 4A state champions.

This is a rematch of the 2016-17 state championship, which Grayson won, and that was the last time these two teams played. Grayson is back into the quarterfinals after last year’s undefeated season and state championship. The Rams had a shaky start based on their standards, with three regular-season losses, but they’ve gotten hot in the playoffs, scoring 83 points in the first two rounds. Roswell is coming off its biggest win in recent memory, knocking off North Cobb in Round 2. Roswell will be riding high on momentum, and the Hornets have scored 160 points in their last three games.

Westlake has two losses on the season, both against really good teams in Creekside and Langston Hughes, and both by seven points. The Lions’ wins are a different story, as their margin of victory is 34 points, and they’ve won their two playoff games 45-3 and 45-10. Carrollton is having another typical Carrollton season, in which the Trojans dominate the majority of their opponents. Their high-powered offense is averaging 43 points per game. This matchup will showcase some top-tier quarterback play — MJ Morris for Carrollton and RJ Johnson for Westlake.

Lee County is in familiar territory, as this is its fifth straight year in the quarterfinals. The Trojans have shown they can score the ball against the best teams, averaging 43 points per game, including two 40-point games, one 50-point game and four games scoring 60-plus points. Buford is one of three teams in the state to score more than 400 points and allow fewer than 100. Many teams are considered elite, and deservingly so, but Buford’s stats suggest that the Wolves are one tier higher. For 11 straight games, Buford has not allowed an opponent to score more than 20 points, and in that span the Wolves have four shutouts and five games holding their opponents to single-digit points. Tune in Friday to see what happens when a high-powered offense meets a lockdown defense.

Apart from its loss to Collins Hill, Mill Creek’s average margin of victory is 27 points. Hayden Clark under center has done a great job in his junior season leading the Hawks’ offense, tripling his yardage from last season. Running back Donovan Journey has been a scoring machine with 19 touchdowns, and junior Caleb Downs has done it all. Milton is riding a 10-game win streak behind the dynamic offensive duo of Devin Farrell at quarterback and Jordan McDonald at running back. Farrell has 1,865 passing yards to go along with 836 rushing yards and 33 total touchdowns. McDonald, a UCF commit, has proven why he is Power Five material with 1,181 yards on the ground and 20 touchdowns. And on defense Milton boasts the top-rated junior in the country in Lebbeus “LT” Overton. A lot of what you see Friday night between these two teams will translate to Saturdays and Sundays.

Rabun County has Gunner Stockton, the No.1 quarterback recruit in the state who has broken nearly every passing record there is — marks previously held by the likes of Deshaun Watson and Trevor Lawrence. Stockton is 409 passing yards away from eclipsing Lawrence’s career mark of 13,902. It’s well known that the Wildcats have an elite offense, but their defense gets overlooked. They are allowing only 12 points per game and have yet to let an opponent see 30 points. Thomasville might not put up the same amount of points as Rabun County, but they simply win games. The Bulldogs have Malik Harper at running back, who is a touchdown machine with 19 touchdowns and 1,000 yards on the ground. The Bulldogs also have 48 total sacks on the season, sixth amongst all teams in Georgia, and linebacker Ty Anderson leads the pack with 12. With a pass rush this formidable, they definitely have the means to slow down Rabun County’s high-powered offense.