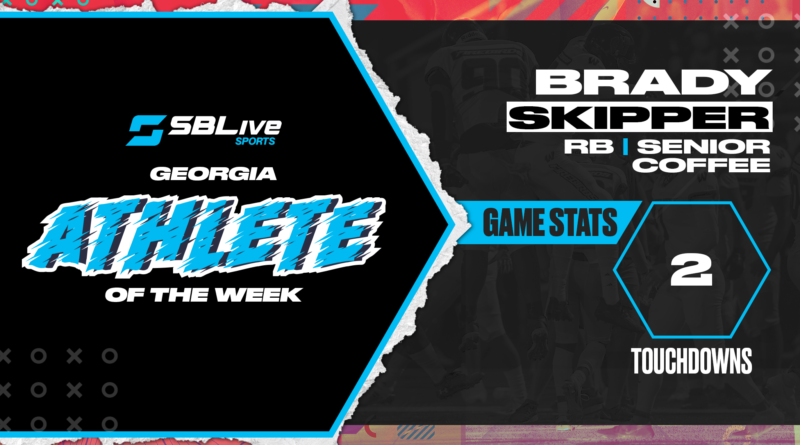 Congratulations to Coffee running back Brady Skipper for being voted SBLive’s Georgia High School Athlete of the Week for Nov. 8-14!

The senior scored both of Coffee’s touchdowns in a 28-18 loss to Creekside.

Skipper ran away with this week’s honor, receiving 85.23% of the total vote.

Brown rushed for 448 yards and five touchdowns on 45 carries, the second-highest single-game total for rushing yards in Georgia playoff history.

Wasden scored 34 points and had five steals, three rebounds, three blocks and two assists in a win over Fideles Christian.

Houston, just a sophomore, had two sacks and multiple tackles for loss in Buford’s 38-14 win over Kell.

Marlow started at running back in place of the injured Christian Isibor and rushed for 150 yards and three touchdowns.

Mulbah had just six carries, but they went for 96 yards and three touchdowns in Westlake’s 45-3 win over Effingham County.

Solomon won the 5K at the Georgia High School Meet of Champions with a time of 15 minutes, 22.82 seconds. He finished four seconds ahead of the runner-up.

Givhan threw a touchdown pass on a trick play and returned a kickoff for a touchdown in a 44-6 win over Camden County.

Poole caught the game-winning touchdown pass with seven seconds left in the fourth quarter in a 28-21 win over Cherokee.

Belcher rushed for three touchdowns in a 45-35 win over Harrison.

Chase Sellers rushed for two touchdowns and hauled in a touchdown reception in a 46-7 win over Alpharetta.

Spence caught three touchdown passes in the first half of Roswell’s 52-8 win over Meadowcreek.

Lonergan threw four touchdown passes in the first half of Brookwood’s 56-7 win over Newnan.

Williams carried the ball 21 times for 145 yards and two touchdowns in a 35-21 win over Decatur.

Tchienchou recovered a fumble and returned it 52 yards for a touchdown in a 42-9 win over Cass.

Alston carried the ball 17 times for 142 yards and four touchdowns in a 48-14 win over Veterans.

Thomas scored two touchdowns on offense and recorded two interceptions in the first half of Benedictine’s 59-0 win over Thomas County Central.

The sophomore rushed for three touchdowns in a 49-28 win over Central-Carroll.